Oscar Anton Olson was born in Norway on December 12, 1883. Olson’s birthplace was found on census records and his birth date was recorded on his World War I draft card. A record of his arrival in the United States has not been found. Who’s Who in American Education (1956) said he was the son of Nels Edward and Louise Annette. According to the Naturalization Record Index at Ancestry.com, Olson became a citizen on October 27, 1884.

In the 1900 U.S. Federal Census, Olson was a servant in the Mickelson household, which consisted of the parents, their four children and a female servant. Mr. Mickelson was a dealer in dry goods and groceries. Apparently, Olson worked for him as a salesman.

Olson attended Iowa State College. The photograph of Olson (left) is from the 1907 yearbook, The Bomb. He graduated in 1908.

Olson has not been found in the 1910 census. Who’s Who in American Education said he married Goldie Payne of Lincoln, Nebraska, on January 23, 1911.

The Iowa State College of Agriculture and Mechanic Arts 1914 named the graduates of June 1914. Olson received a degree in mechanical engineering. According to Who’s Who in American Education, Olson received his masters degree.

The 1915 Iowa State Census recorded Olson and his wife in Ames. He was a draftsman who had four years of high school and four years of college. And he was a Lutheran.

On September 12, 1918, Olson signed his World War I draft card. He was an assistant professor in mechanical engineering at Iowa State College. Olson and his wife, Goldie, resided at 617 Clark Avenue in Ames, Iowa. He was described as medium height and build, with brown eyes and hair.

Olson was at the same address in the 1920 census. His occupation was college teacher and he had a four-year-old daughter, Louise.

All of them were found in the 1930 census in Ames at a different address, 712 Tenth Street. Olson continued as a college teacher. The 1936 Ames city directory said Olson was the acting head and associate Professor of Engineering Drawing at Iowa Sate College. 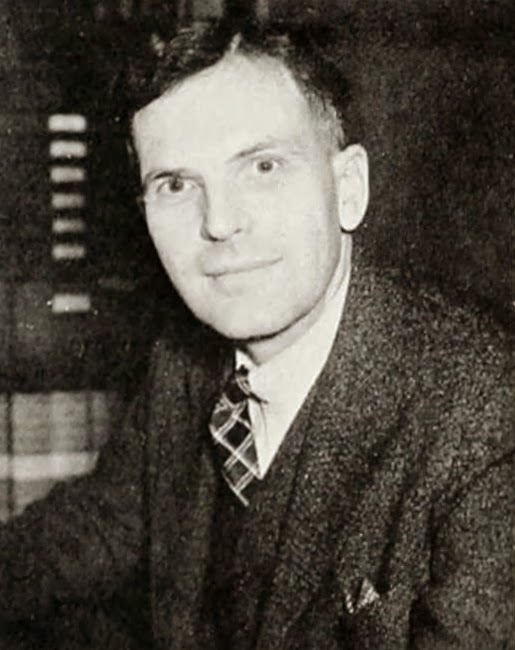 The photograph of Olson (above) is from the 1938 Iowa State College yearbook, The Bomb.

Olson’s address was unchanged in the 1940 census. Olson’s job was drawing engineer at the state college. He retired in 1948.

According to the Social Security Death Index, Olson passed away in March 1971. His last known residence was Ankeny, Iowa.

“One of the many reasons the name ‘Ames’ is known far and wide is a little device developed by O.A. Olson. Called by him the ‘Ames Lettering Guide’ the small instrument probably has been used by nearly every aspiring engineer or draftsman who was ever enrolled in a mechanical drawing class.

“Simple in its design, the device allowed the draftsman to put precisely-spaced lines on his drawing as a guide to the lettering required to identify various parts and the plate itself. For more than half a century, Mr. Olson’s invention has been in widespread general use.

“For many years, the manufacture of the lettering guide was carried on in the basement of his home, and the work of assembling, packing and shipping furnished employment for several generations of college students and student wives.

“Mr. Olson took great pride in his little manufacturing operation, showing visitors around with detailed explanation. He ducked under furnace pipes with comments about the ‘low overhead’ and explained that the assembly area was below ‘the kitchen upstairs, where we make the dough.’

“The Ames lettering device was not his only invention. He also perfected a number of items intended for use in teaching geometry and for other mechanical drawing applications, including the Draft-pak used by school students here and elsewhere.

“He had a great imagination, enetrprise [sic], practicality and with it all, a great love of life. Along with many other people here, we held a great affection for him.”

Born on December 12, 1883 at Tonsburg, Norway, he came to the United States as a small child. He graduated from Iowa State University in 1908 with a B.S. degree and in 1914 earned the M. E. degree. He was appointed to the staff of mechanical engineering in 1913 and served with the department until 1935 when he became head of the engineering drawing department. He retired in 1948. Professor Olson founded the O. A. Olson Manufacturing Company in 1919 to produce the Ames lettering guide which sold all over the world. He is also the inventor of a valve seating machine as well as developing a number of graphic design teaching aids.

Besides being a member of the Ascension Lutheran Church, he was a charter member of the Sioux City Rotary Club and held membership in the Ames Rotary Club. He aided many engineering students by offering them work in his plant, thus enabling them to graduate. Professor Olson is named in “American Man of Science”, “Who’s Who in Iowa”, “Who’s Who in America”, “Who’s Who in Education of Norwegian Origin” and “Who’s Who in American Education”. He is survived by two daughters, Mrs. Wright of Cedar Rapids and Mrs. Huston of Ames, a sister, Anna G. Olson of Fergus Falls, Minnesota, a half-sister, Mrs. Nettie Mattison of Bingham Lakes, Minnesota, seven grandchildren and one great grandchild.

He was preceded in death by his wife, Goldie Payne O. Olson, and a brother.


The Spring 1993 issue of Engineering Design Graphics Journal published a recollection of a meeting with Olson.


...I had the pleasure of meeting Professor O. A. Olson, the inventor, manufacturer and distributor of the Ames Lettering Instrument, at the ASEE Annual Conference in 1956 at Iowa State University, Ames, Iowa. I don’t know that Professor Olson ever peddled his product door-to-door, but it was always available in college bookstores and on display at ASEE conferences where samples were freely distributed. The Ames Lettering Instrument is among the most useful and long lived of many such devices appearing during the past fifty years. In the original Ames Lettering Instrument, the rotating plastic disk was secured in a bent-wire frame. The wire frame tended to rust and get out of shape, and was soon replaced by a plastic mount, a great improvement. It is possible that some of our younger members have never used, or before heard of, the Ames Lettering Instrument. Back in the “old days” when drawings were annotated with hand-lettered notes, light guide lines were ruled as an aid to maintaining straight evenly spaced lines of letters. The Ames Lettering Instrument greatly simplified the rather tedious and boring task of ruling guide lines. It is my understanding that the Ames Manufacturing Company has provided jobs for countless Iowa State University engineering students over the past half-century.

Draftsmen were using lettering triangles to draw guide lines. The Iowa Engineer, May 1912, published a version (below). 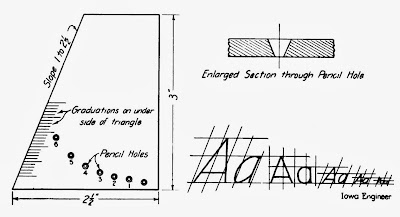 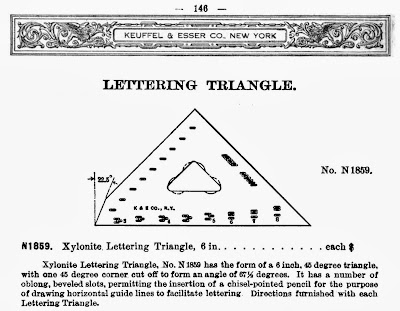 The Pease Unique Lettering Angle was advertised in The American Stationer and Office Outfitter, October 22, 1921 and Industrial Arts Magazine, December 1922 (below). 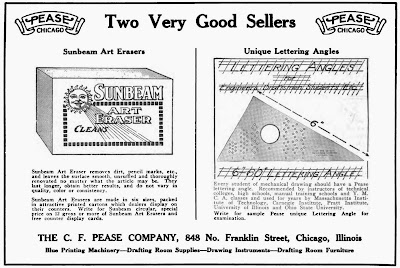 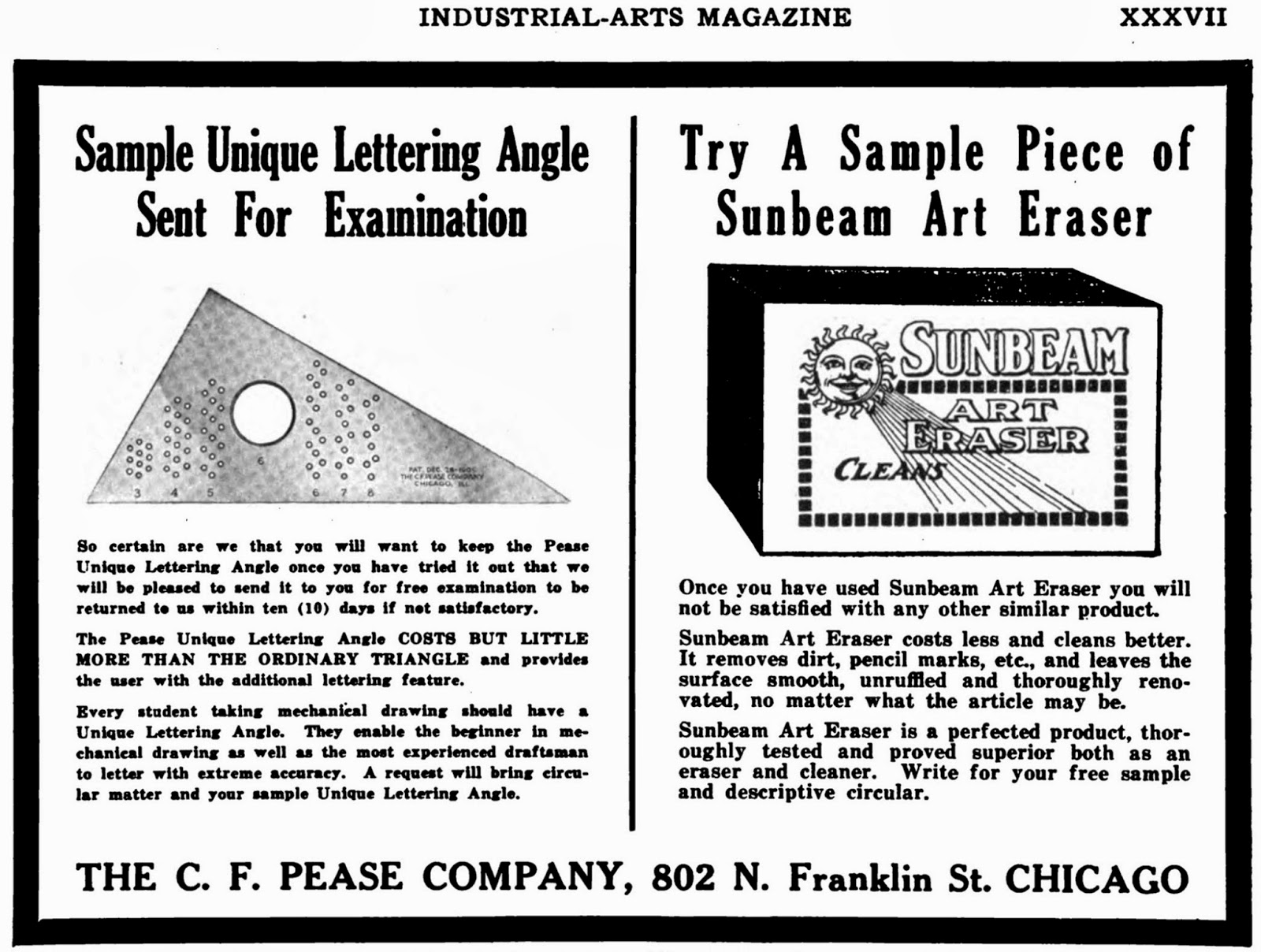 In 1925 the Keuffel & Esser Company submitted a patent application for a “Drafting Instrument” which was published in 1929. 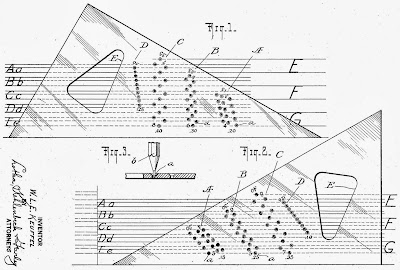 Another tool was the Draftsquare in The American Stationer and Office Outfitter, July 30, 1921. 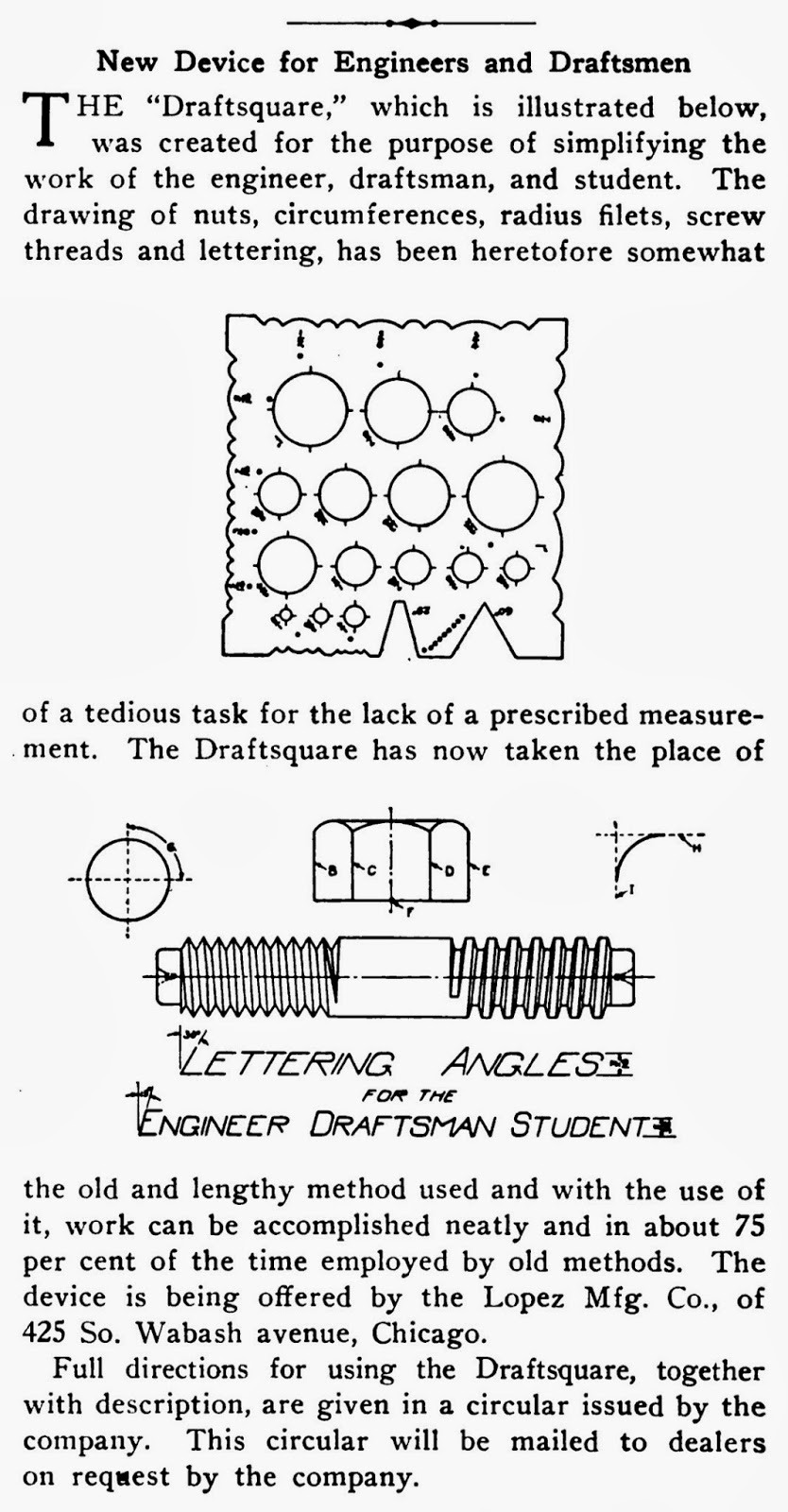 Olson invented a lettering-triangle and wrote a description March 9, 1917. His innovation was the rotating disc. A technical drawing, description and application were sent to the United States Patent Office which filed it on March 29, 1917. Olson’s lettering-triangle was patented April 16, 1918 and assigned number 1,262,971. The document can be downloaded here. 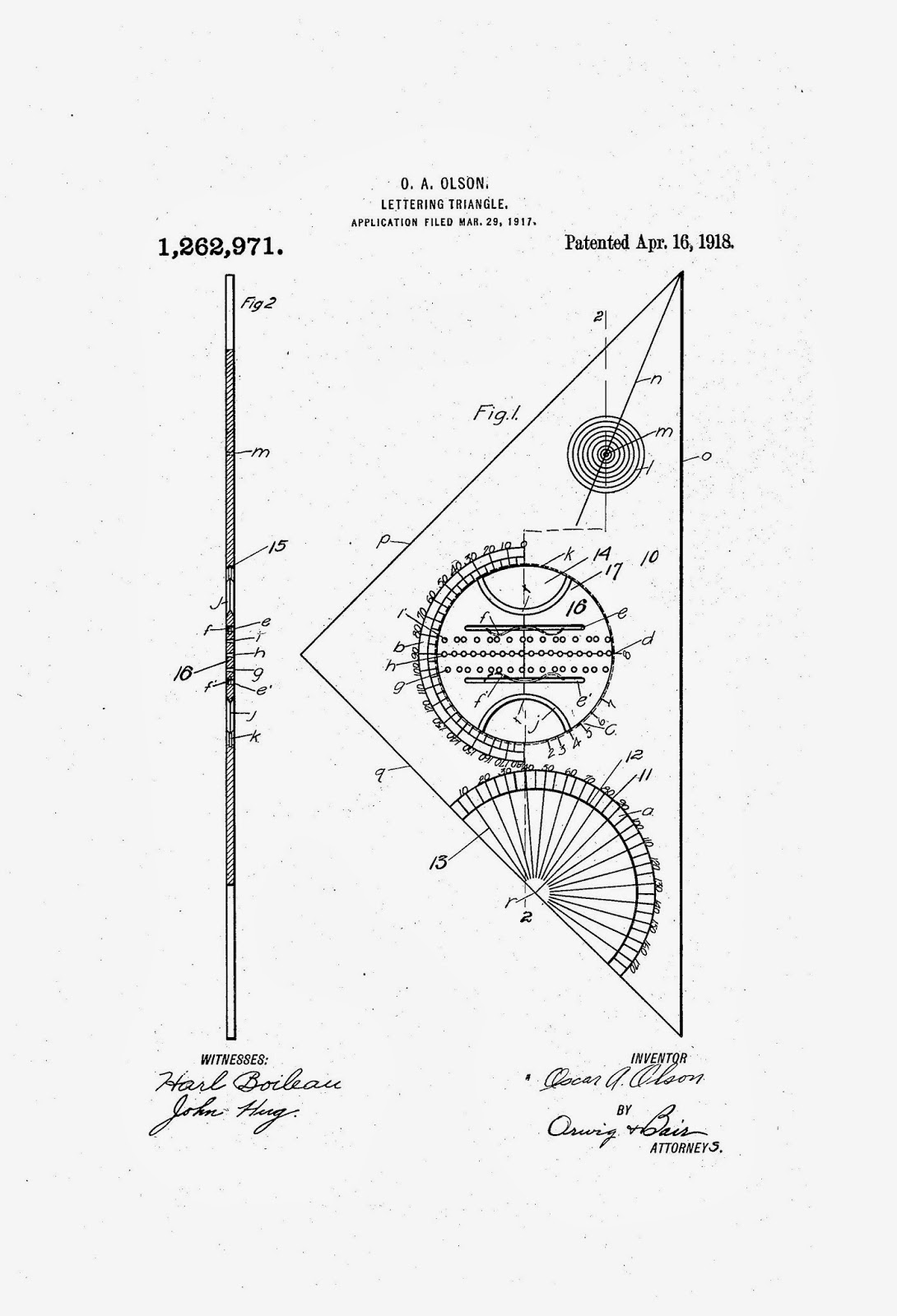 The Iowa Engineer mentioned Olson’s inventions, including the lettering device, in its May 1917 issue:

Prof. O. A. Olson of the M. E. Department has in the past six months come into especial prominence by patenting three labor saving devices. These three latest additions to the industrial world are a lettering triangle called the “Ames Triangle,” a thread cutter and end holder for hand sewing, and an advertising novelty in the form of a pencil which contains, instead of the lead, a strip of paper three inches wide and twelve inches long. These are not his only inventions, for he now holds nine patents three of which are foreign. 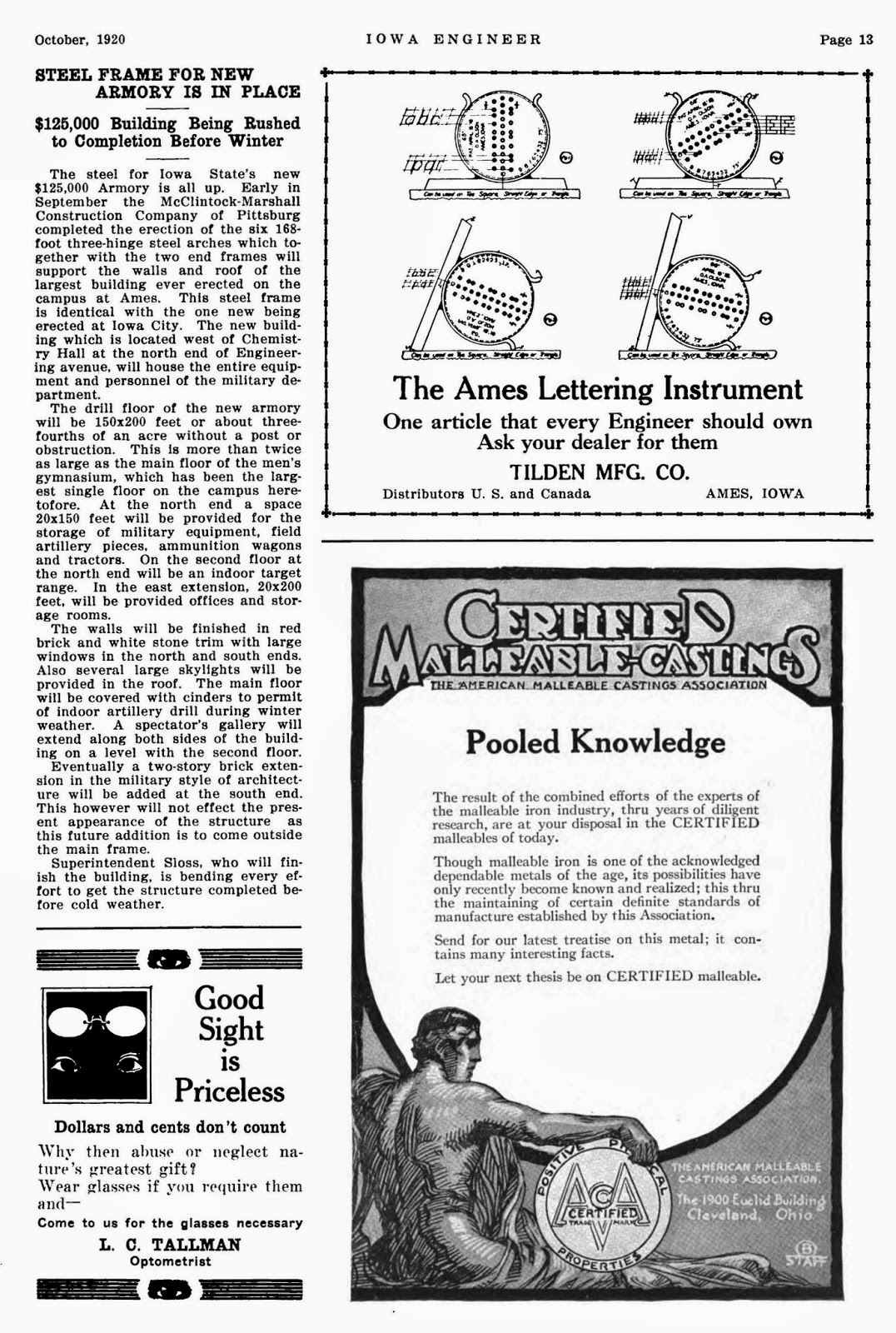 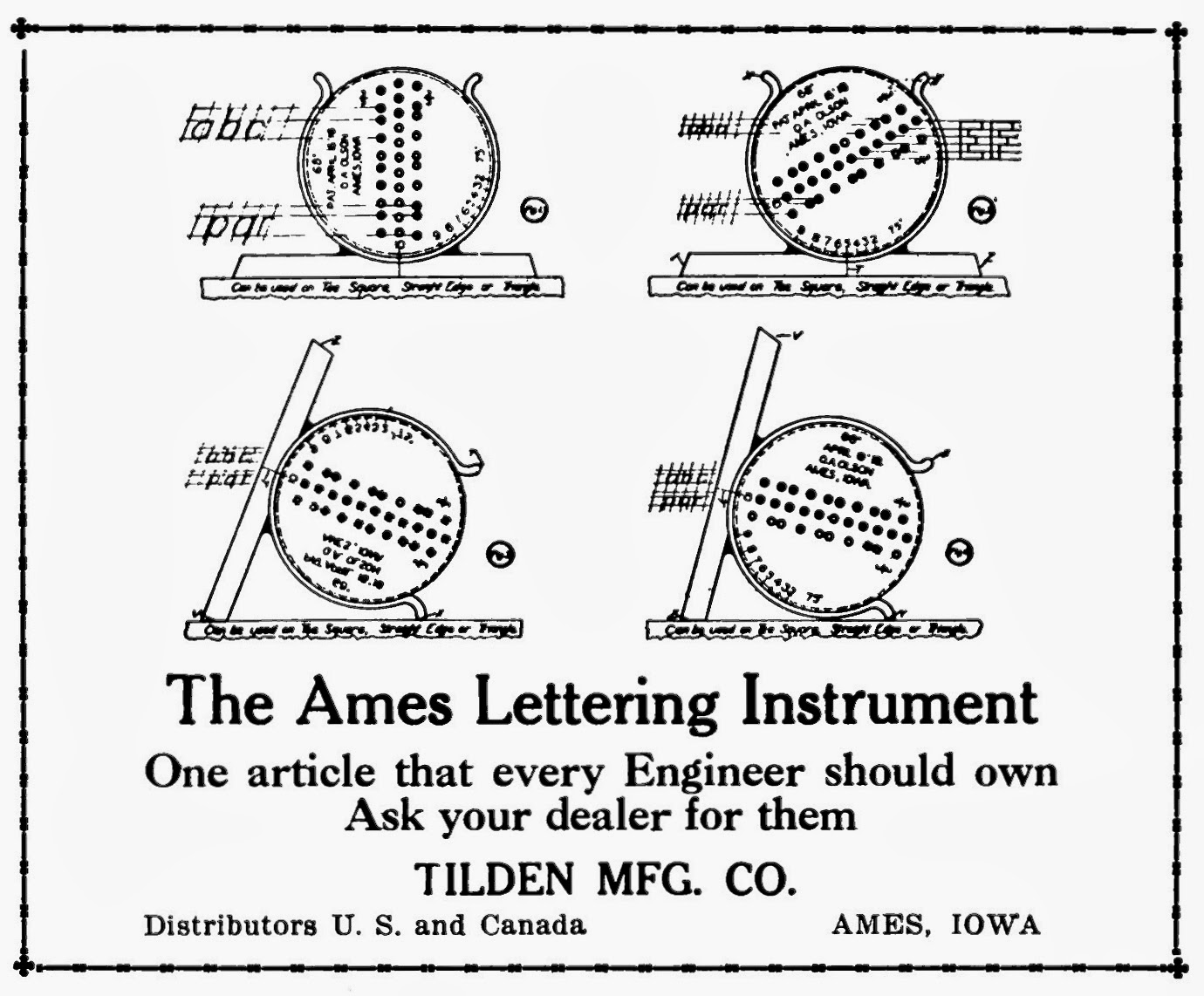 The Massachusetts Institute of Technology Museum has the 1922 Ames Lettering Instrument in its collection. 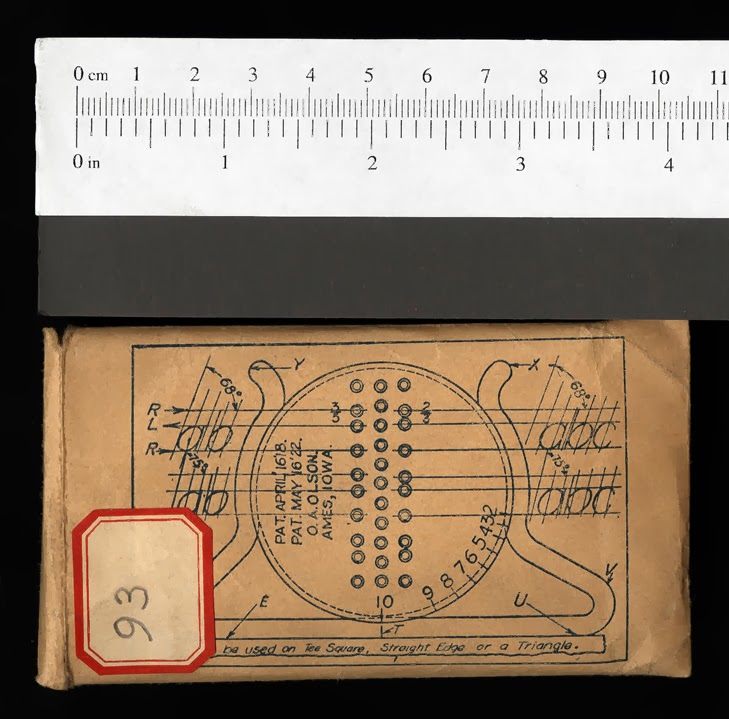 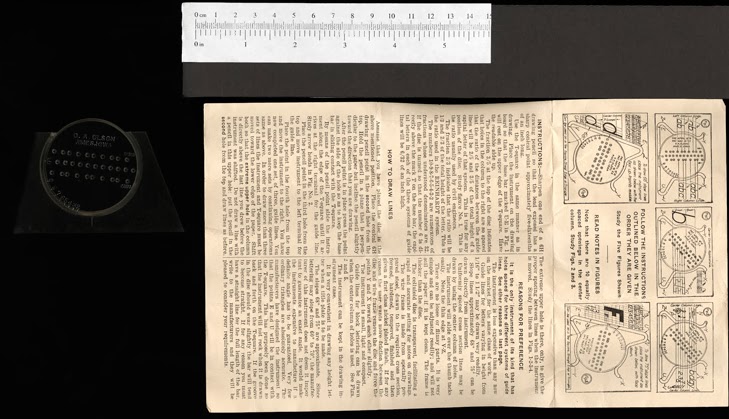 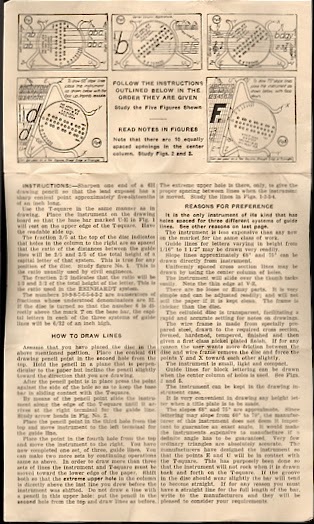 Teachers and students of mechanical drawing will be glad to learn of a new and distinctly practical tool for use in lettering.

It is called the Ames Lettering Instrument, having been originated by Prof. O. A. Olson of Ames, Iowa. Among the many devices for lettering, this instrument is unique, being extremely simple in design, light and compact. It consists of a celluloid disc held so as to rotate on a U-shaped retaining ring on which is attached a bar, which serves as a base and straight edge.

A series of holes in the disc enable the user to draw with accuracy and ease the guide lines for three systems of lettering and for letters of any height. By turning the instrument, the bar can be used as an angle enabling one to draw guide lines at either 75 or 68 degrees. Altogether it is a compact, convenient and practical instrument. 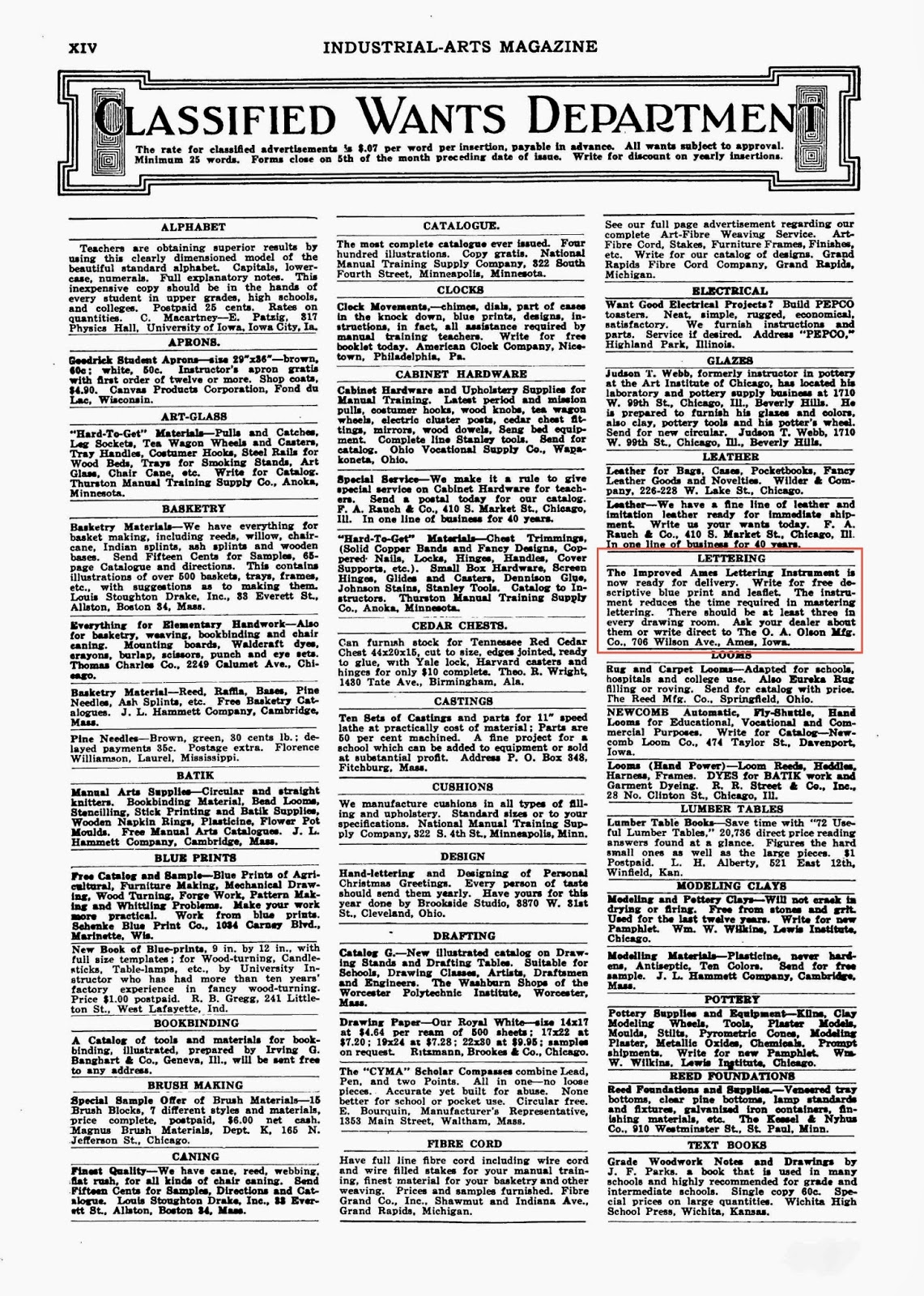 The Ames Lettering Instrument was part of a drafting set advertised in American Machinist, December 28, 1922. The description said: “The Ames lettering instrument is a steel frame holding a celluloid disk which may be rotated in it. In the disk are three parallel rows of tapered holes for drawing guide lines for lettering.” 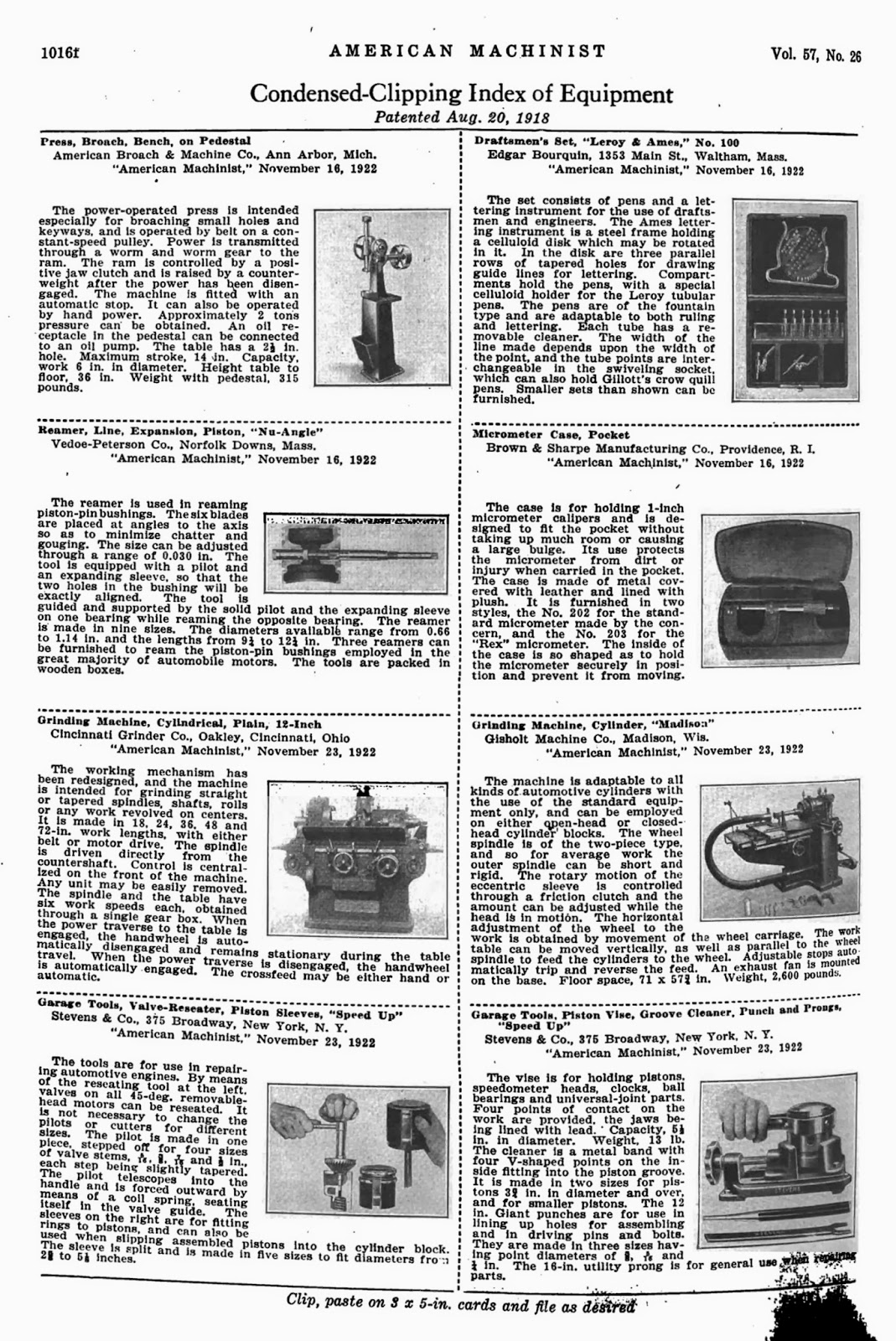 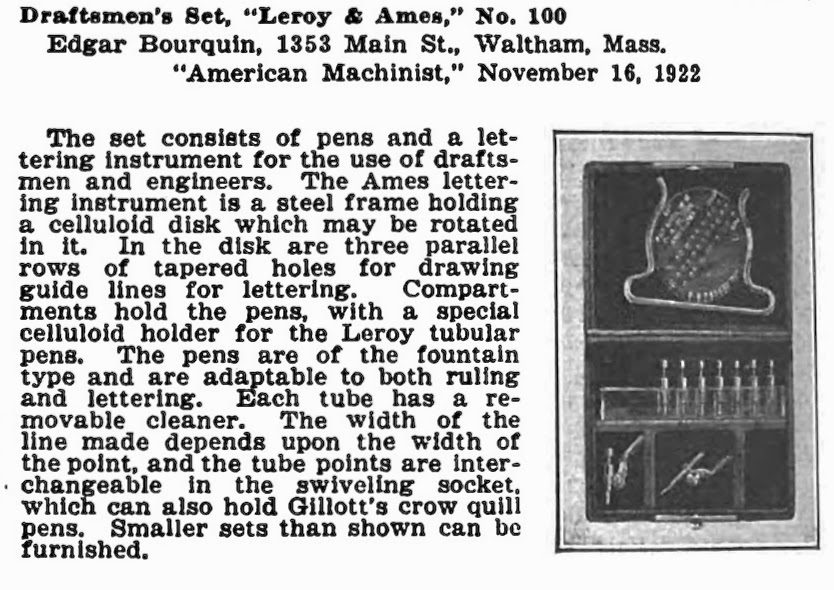 An excerpt from Olson’s entry in American Educators of Norwegian Origin (1931) said:

…Inventor and manufacturer of the Ames Lettering Instrument. “There is no lettering device of which I have any knowledge, that approaches it in simplicity, neatness, accuracy and range of work. It is a satisfaction to know that the instrument is carrying the word ‘Ames’ to all parts of the United States, and to every country of the world where engineering work is being done.” Prof. Warren H. Meeker, Head of the Department of Mechanical Engineering, Iowa State College.

A 1945 issue of Plastics and Resins published this article:


Lettering Instrument Before the largest or the smallest airplane, ship, jeep or tank can be built, complicated and detailed diagrams, charts and blueprints must be drawn, and lettering instruments have assumed an importance perhaps greater that they have ever known before.

The Ames Lettering Instrument is the only instrument of this type that provides for the spacing of guide lines for the three different systems of letters most commonly used by commercial draftsmen. It is the only instrument that provides a means of drawing, without adjustment of parts, the two slope lines usually used for notes on drawings. The instrument also provides a means of drawing guide lines for letters of any height from 1/16 to 1-1/2 inches and for the four guide lines required by students learning to letter.

This lettering instrument is made in two parts, the circular center piece revolves by means of a groove in the outside piece permitting simple adjustment. The transparent Lumarith from which it is made allows lines already drawn to be seen clearly through the instrument. Its L-ipse fitting construction guarantees against slipping and subsequent distortion of the letters while the instrument is in use.

The Ames Lettering Instrument is manufactured by the O. A. Olson Manufacturing Company, Ames, Iowa. Lumarith is a product of Celanese Plastics Corporation. 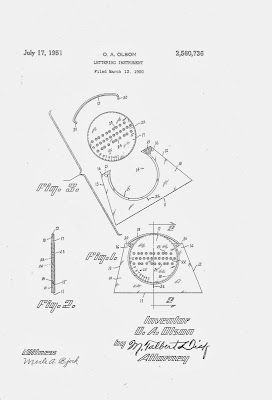 The date of the instrument below has not yet been determined. 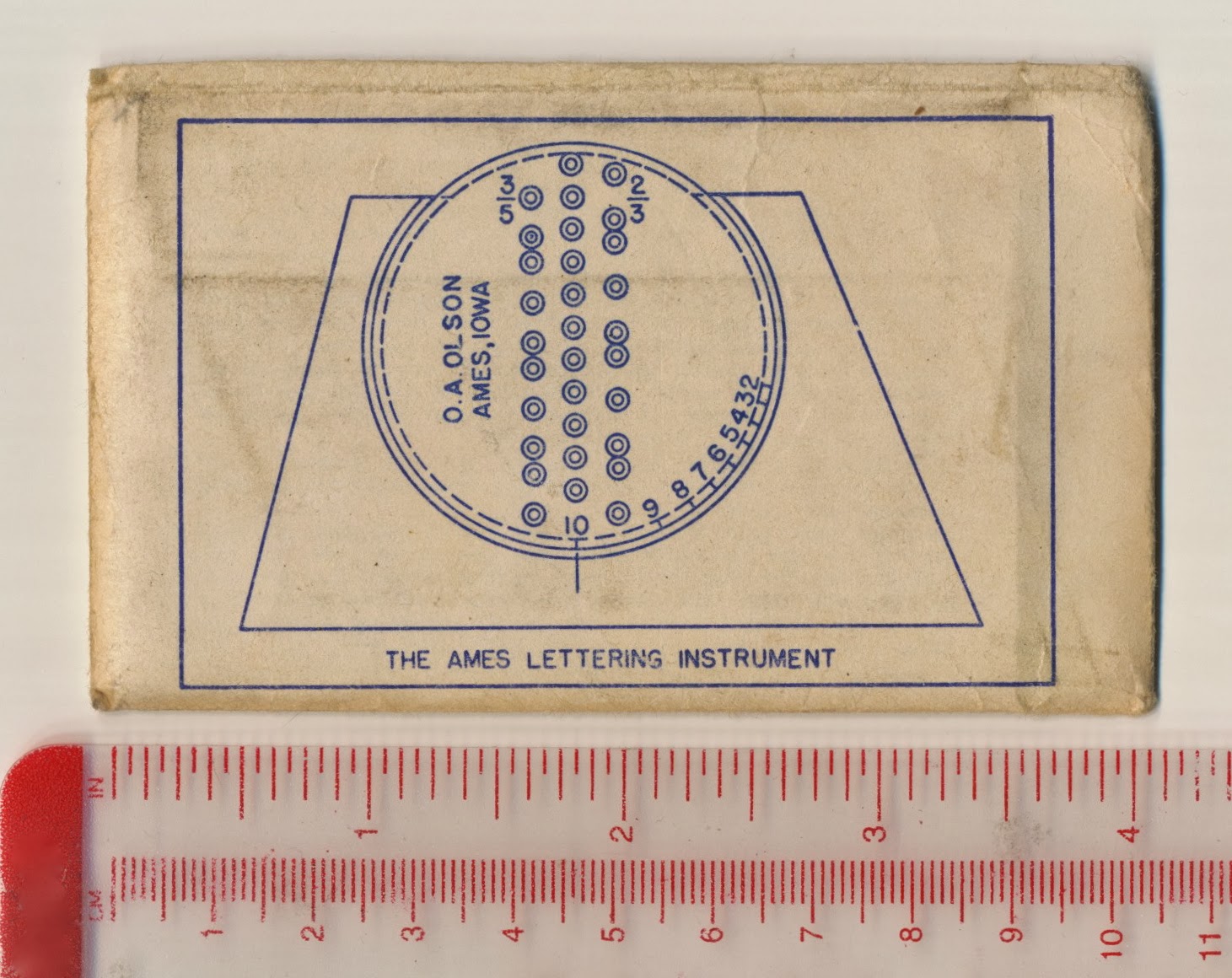 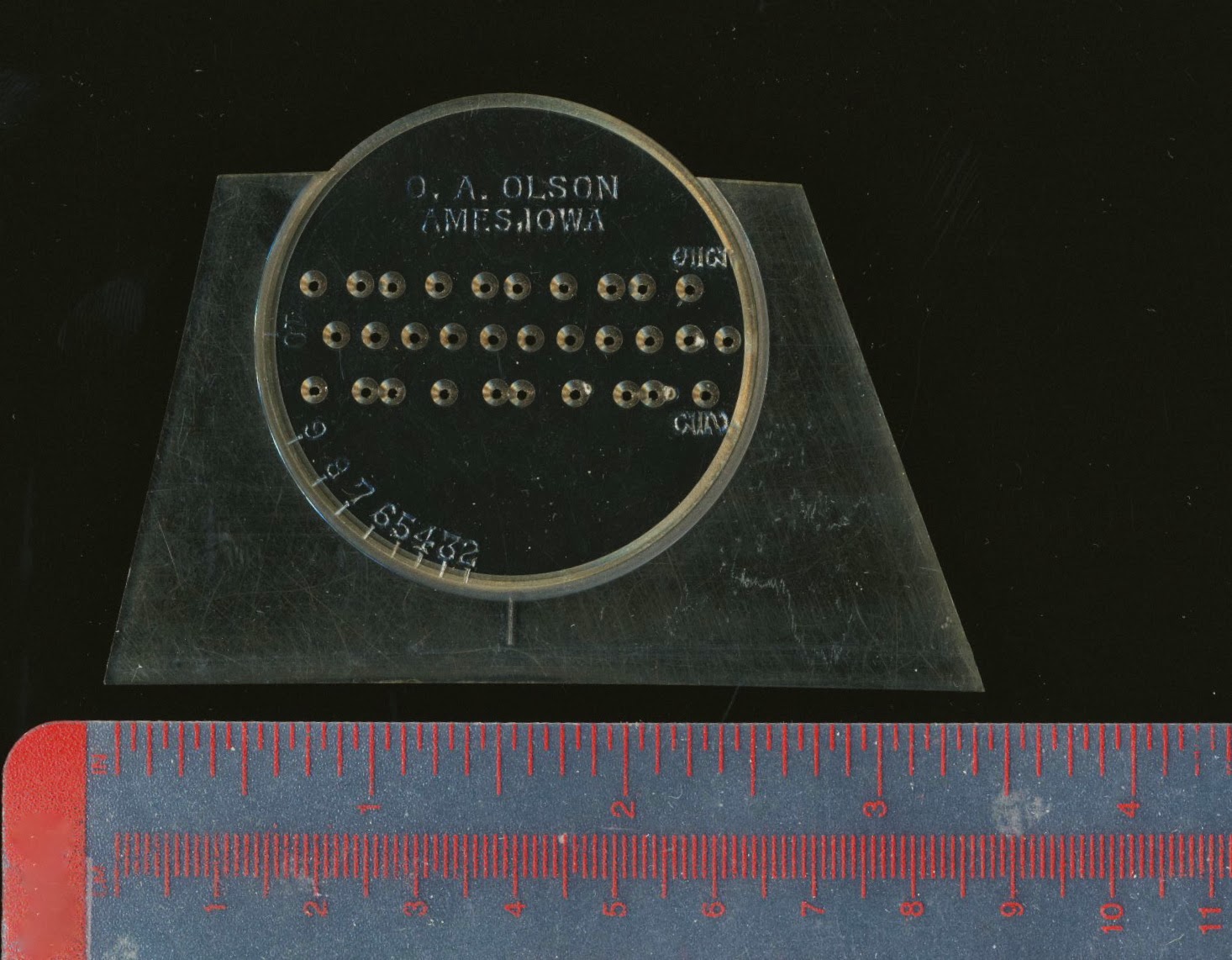 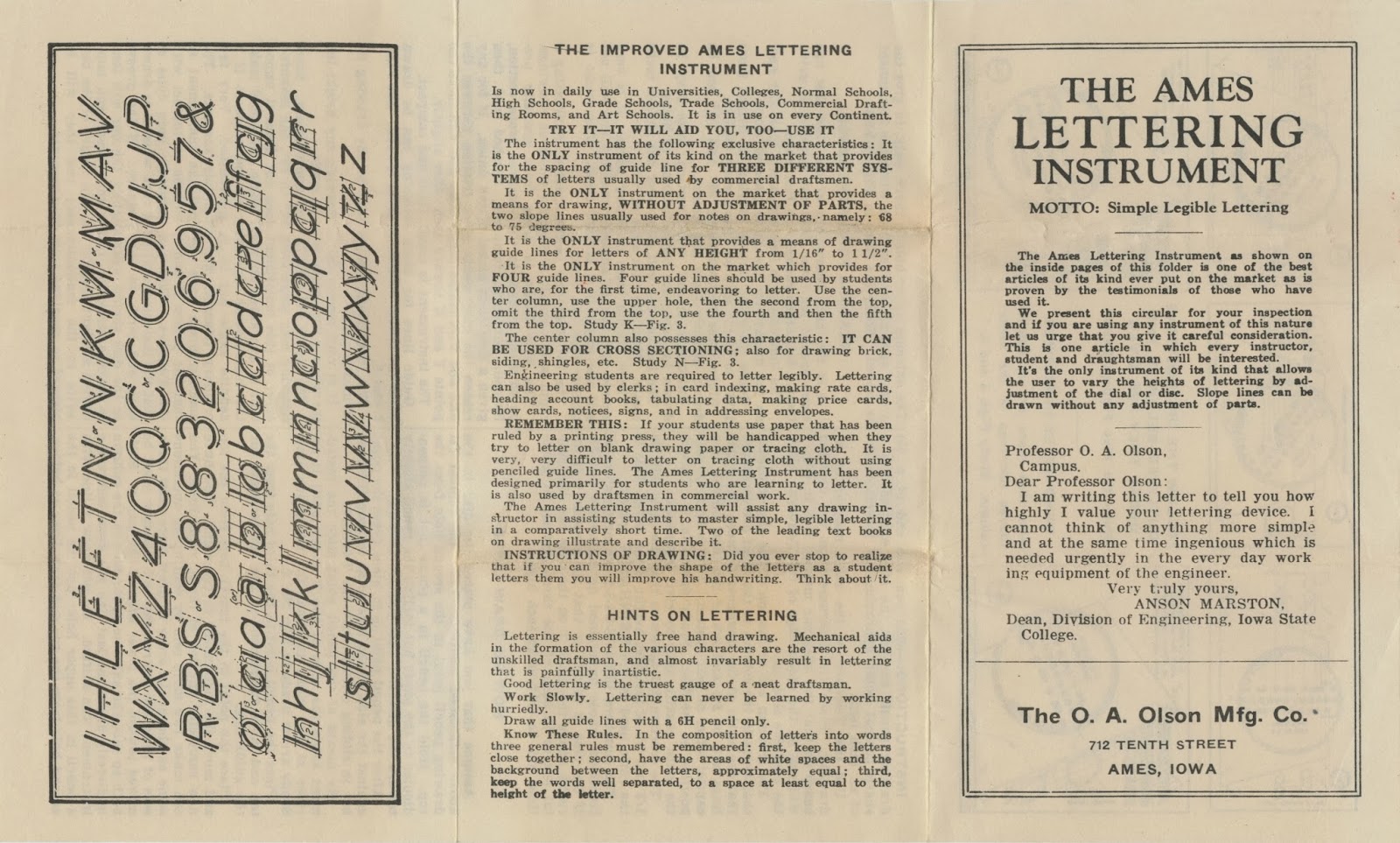 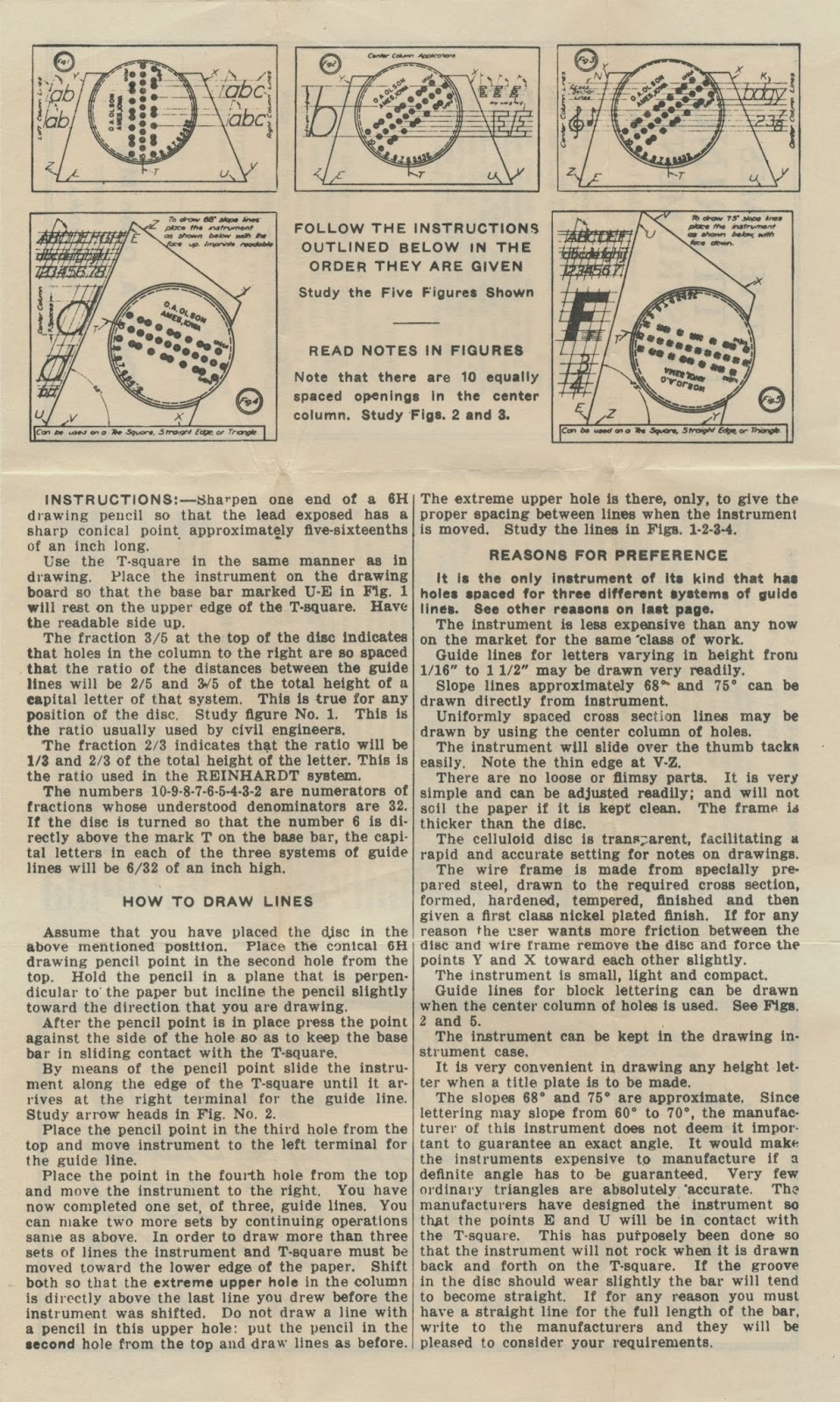 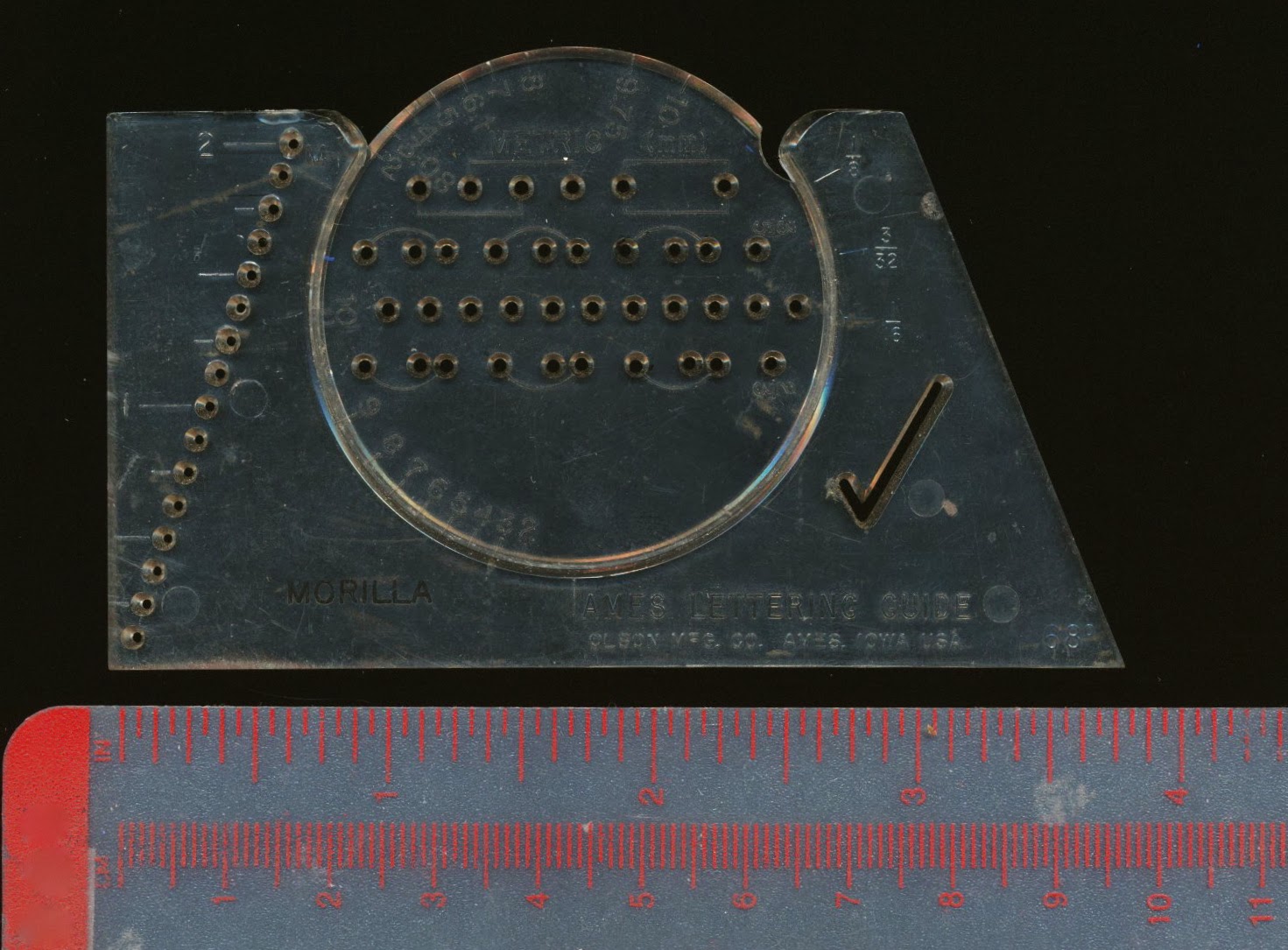 For decades, the Ames Lettering Guide was an essential tool used for lettering comic strips and comic books. Examples can be found in The DC Comics Guide to Coloring and Lettering Comics (2013) and Drawing Comics (2012).

The Ames Lettering Guide continues to be manufactured, although, no longer in Ames. The Kansas City Business Journal, October 31, 2004, said Olson’s grandson, David Huston, was producing the lettering guides.