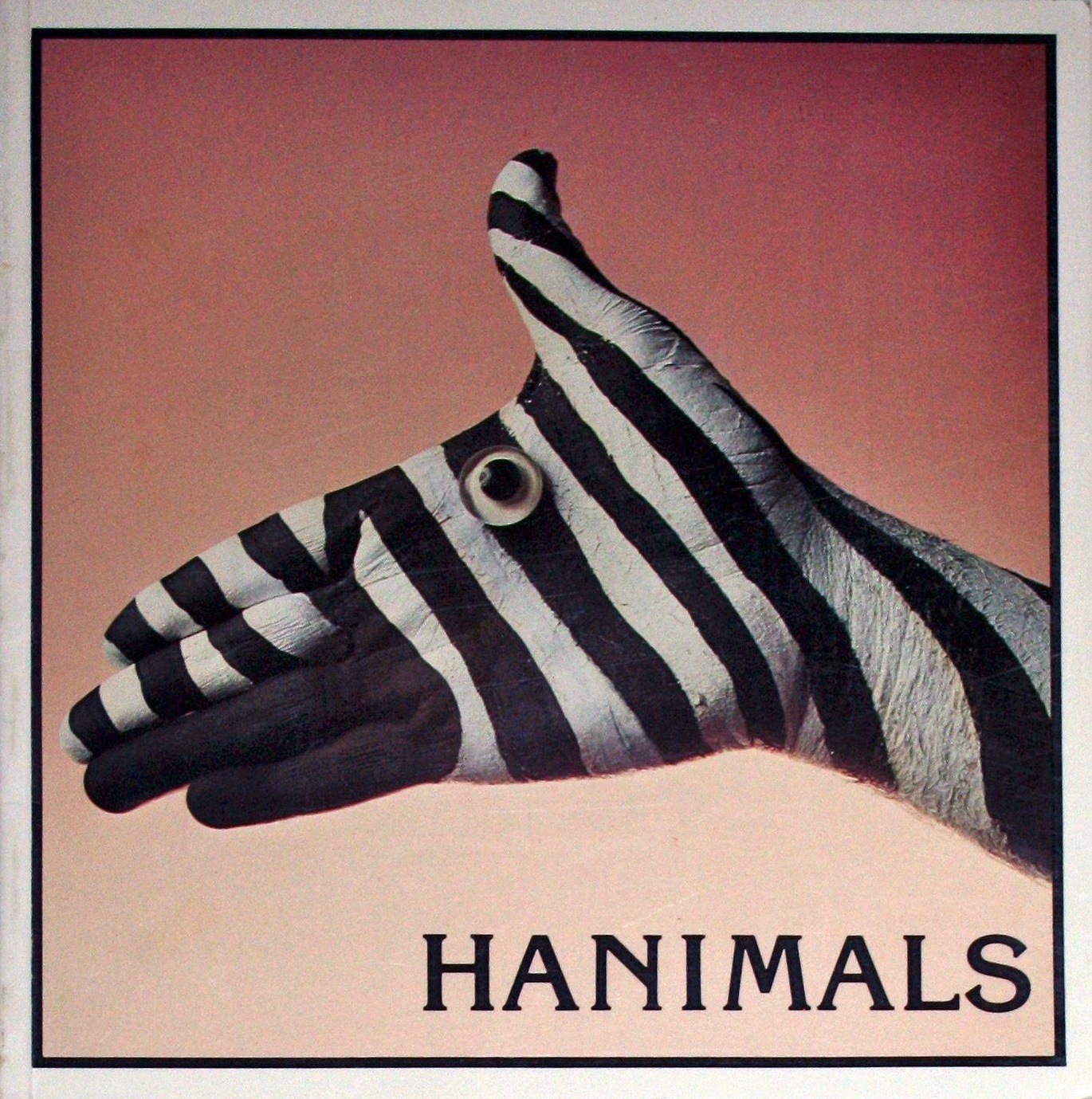 …They needed what every client wants: Smart, breakthrough advertising. What they got was a trip to the zoo. Mike Jordan, the copywriter assigned to the business, had a book of “hand sculptures” which had been created by an Italian artist, Mario Mariotti. Mariotti's technique was to take someone’s hand, quickly daub it with paint to resemble some kind of animal, then photograph it. Arendash felt that, if the concept could be refined, “animals” would be a terrific way to show off Noblia….

…Working with Mariotti’s idea of the hand as an animal, Bruce Arendash and creative director Lynn Giordano began putting the pieces together. They hired Hiro, the famed Japanese photographer. Matching product attributes to animal characters, they came up with a duck, a swan, a giraffe and a zebra. The headlines pointed up the similarities: “Waterproof as a duck,” “Elegant as a swan.” “Thin as a giraffe,” “Bold as a Zebra.”…

…We really needed to set an image. The ‘animals’ did a good job of that from an advertising point of view, but where the ads appeared was just as important,” Kravetz continues. Lintas bought heavily in the fashion list: GQ, Harper’s Bazaar, Vogue and Esquire. It also bought Town & Country, a key play in the jewelry industry….


…The “animals” were unleashed in Fall 1986, to coincide with the second half of the 1986 buying season. Citizen put about $2 million behind the effort and a bit more than that for 1987. For their money, they got a series of spreads and a special twelve-page insert in jewelery [sic] trade magazines....

As Waterproof As a Duck. 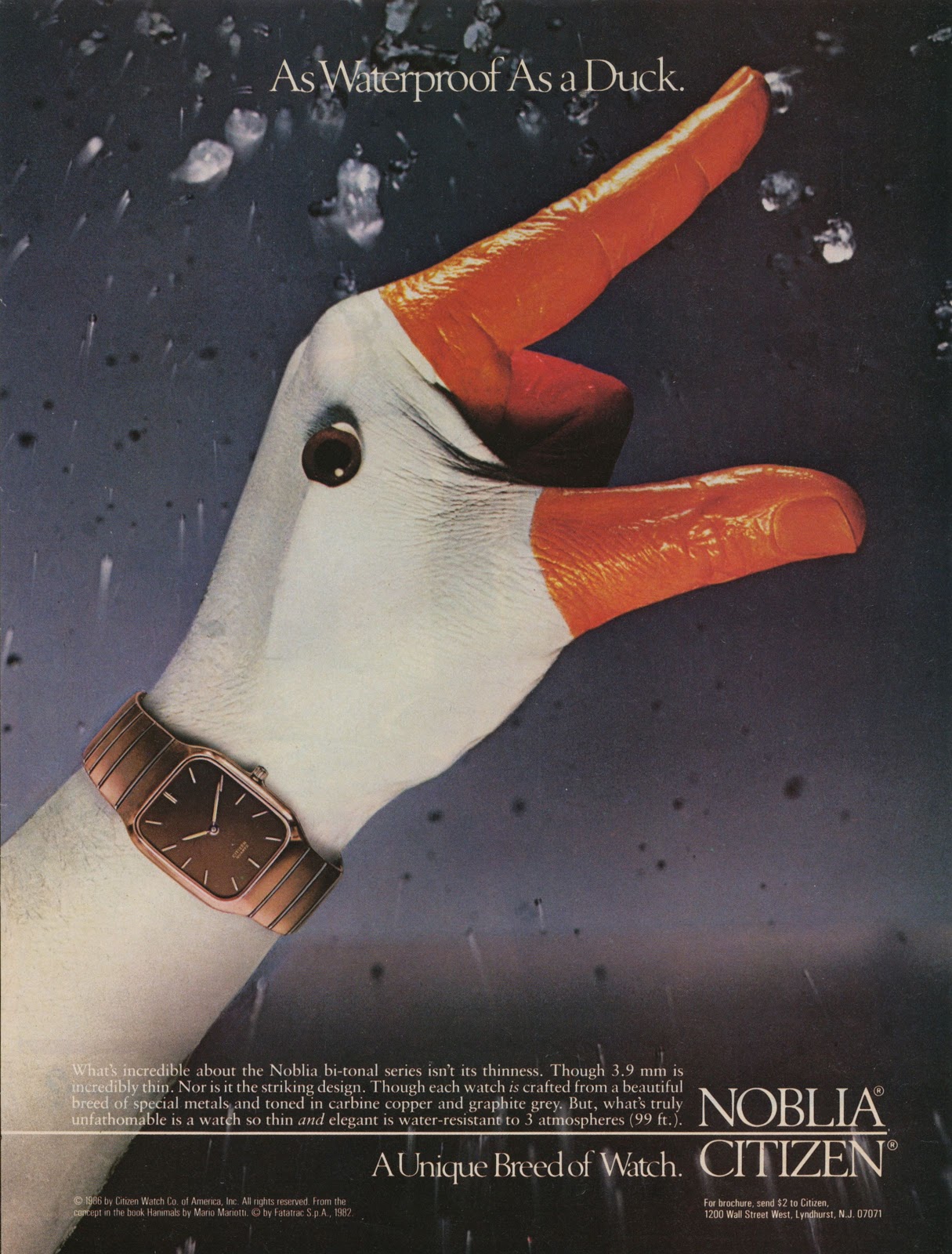 As Thin As a Flamingo. 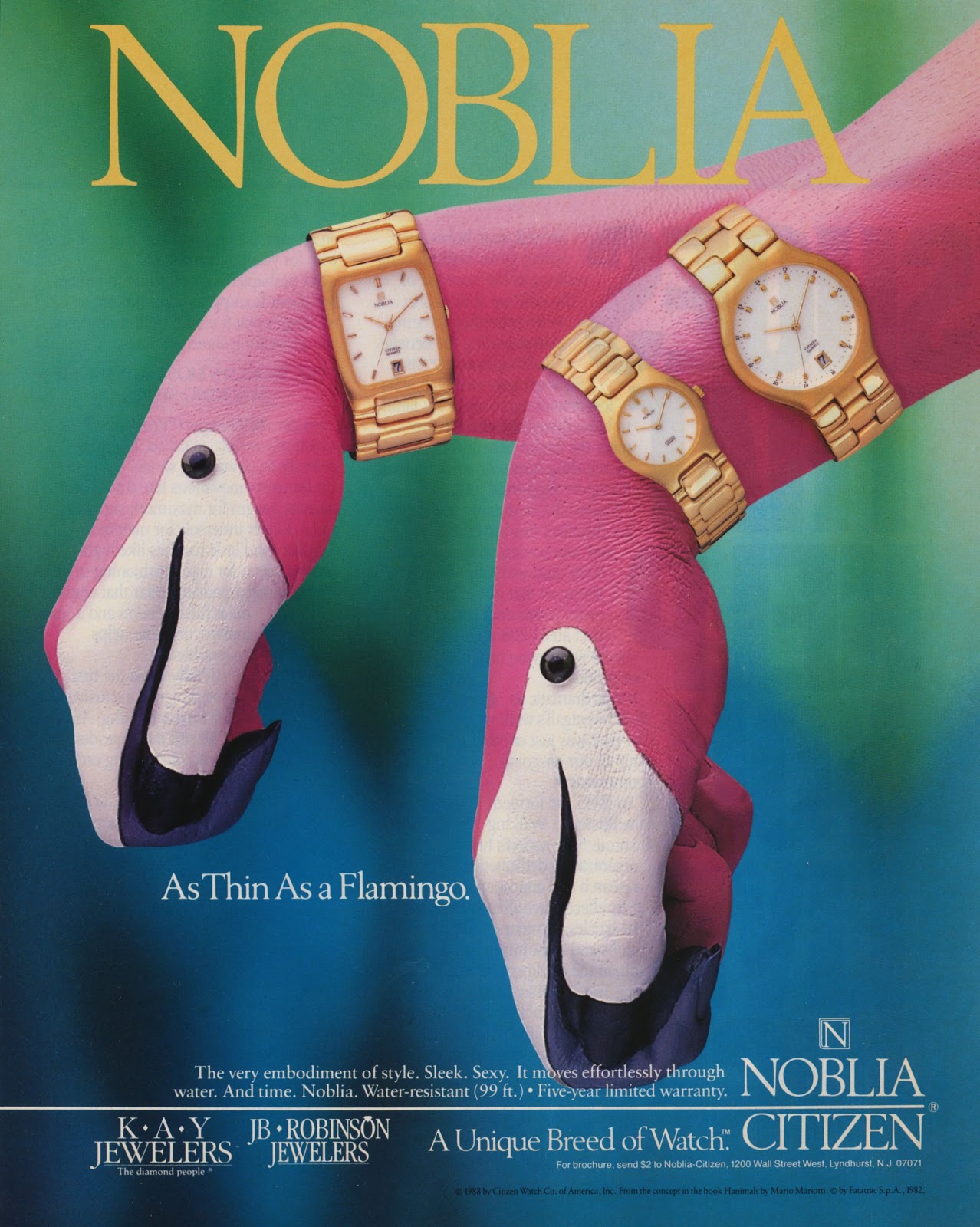 As Thin As a Giraffe. 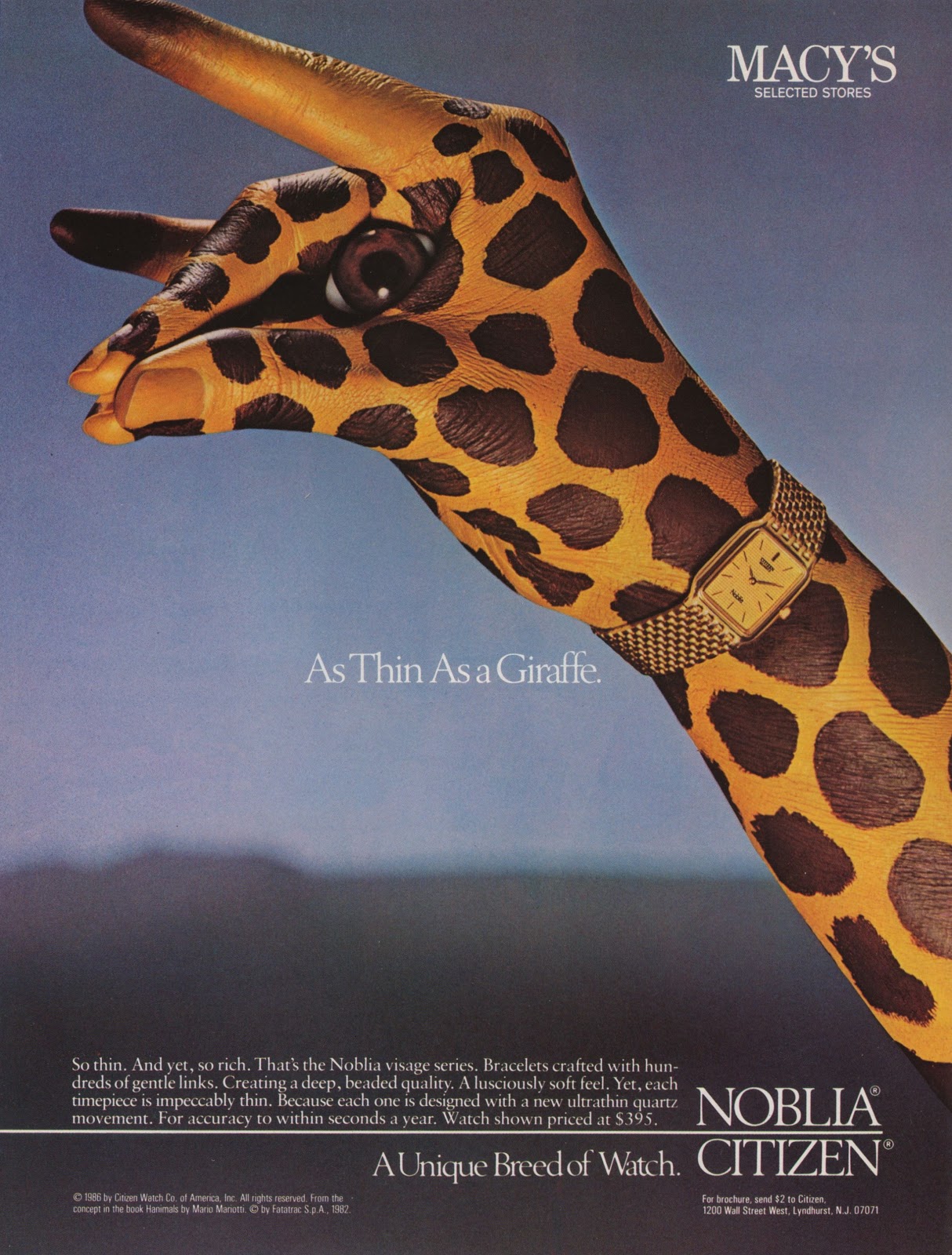 As Striking As a Panther. 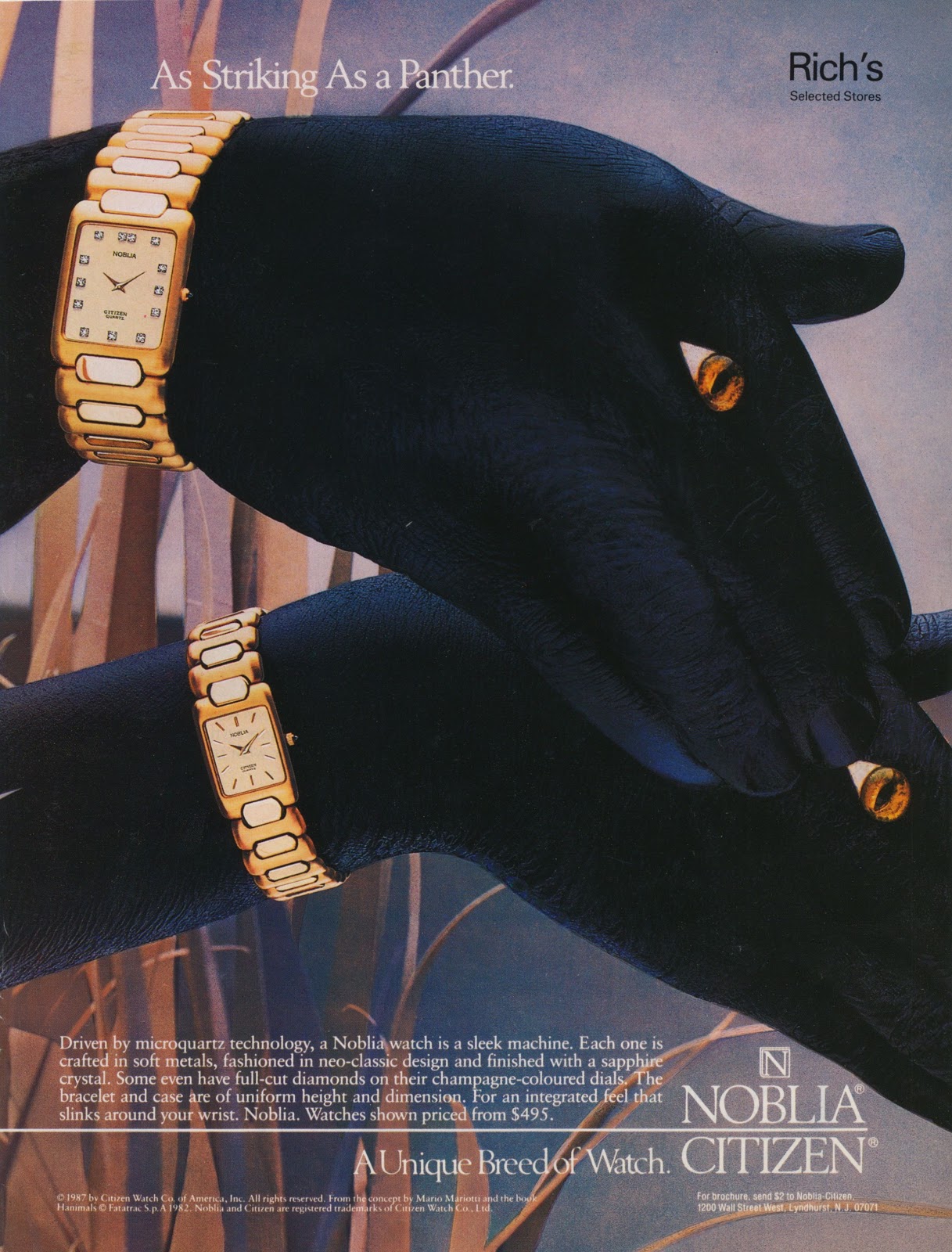 As Exotic As a Parrot. 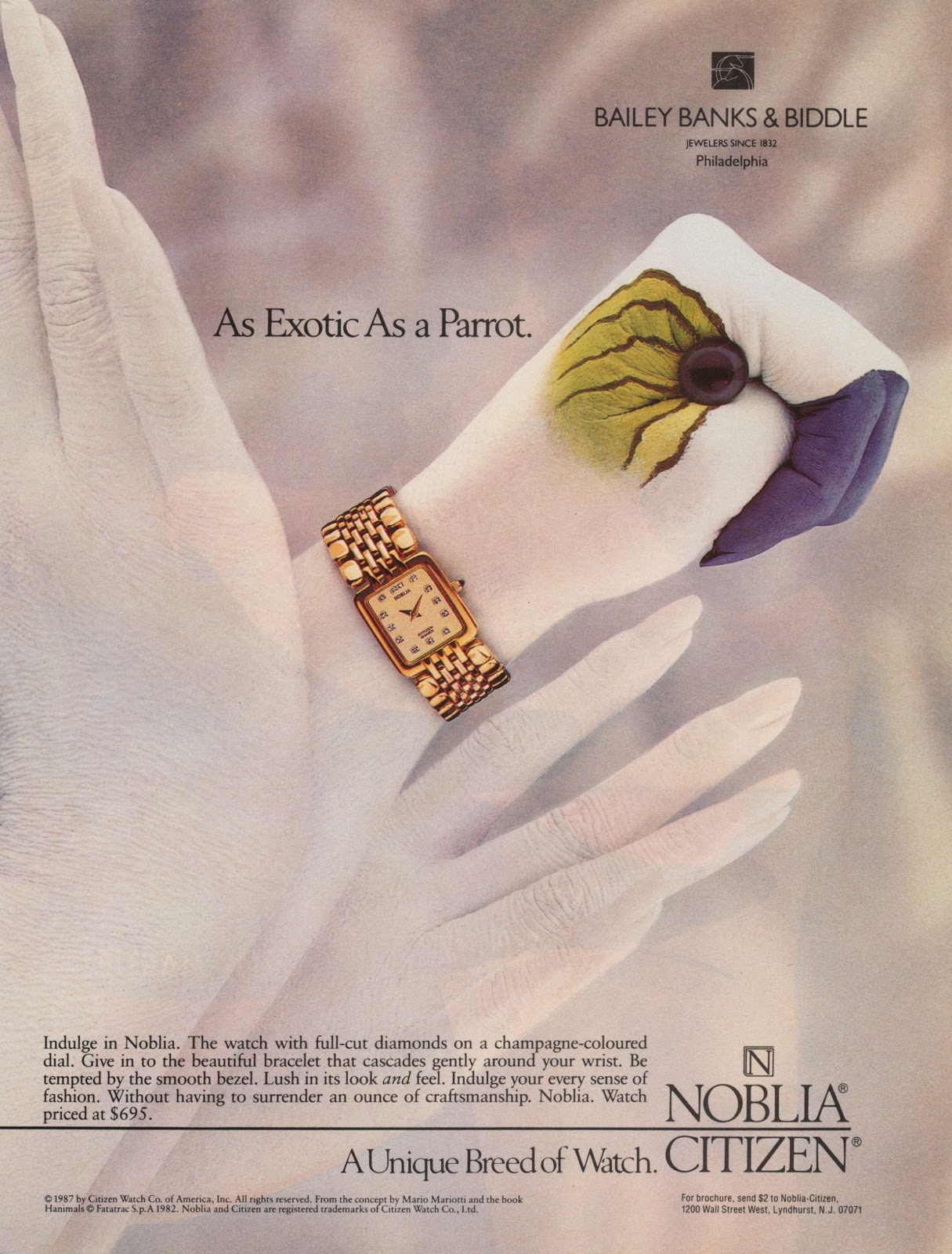 As Rugged As a Ram. 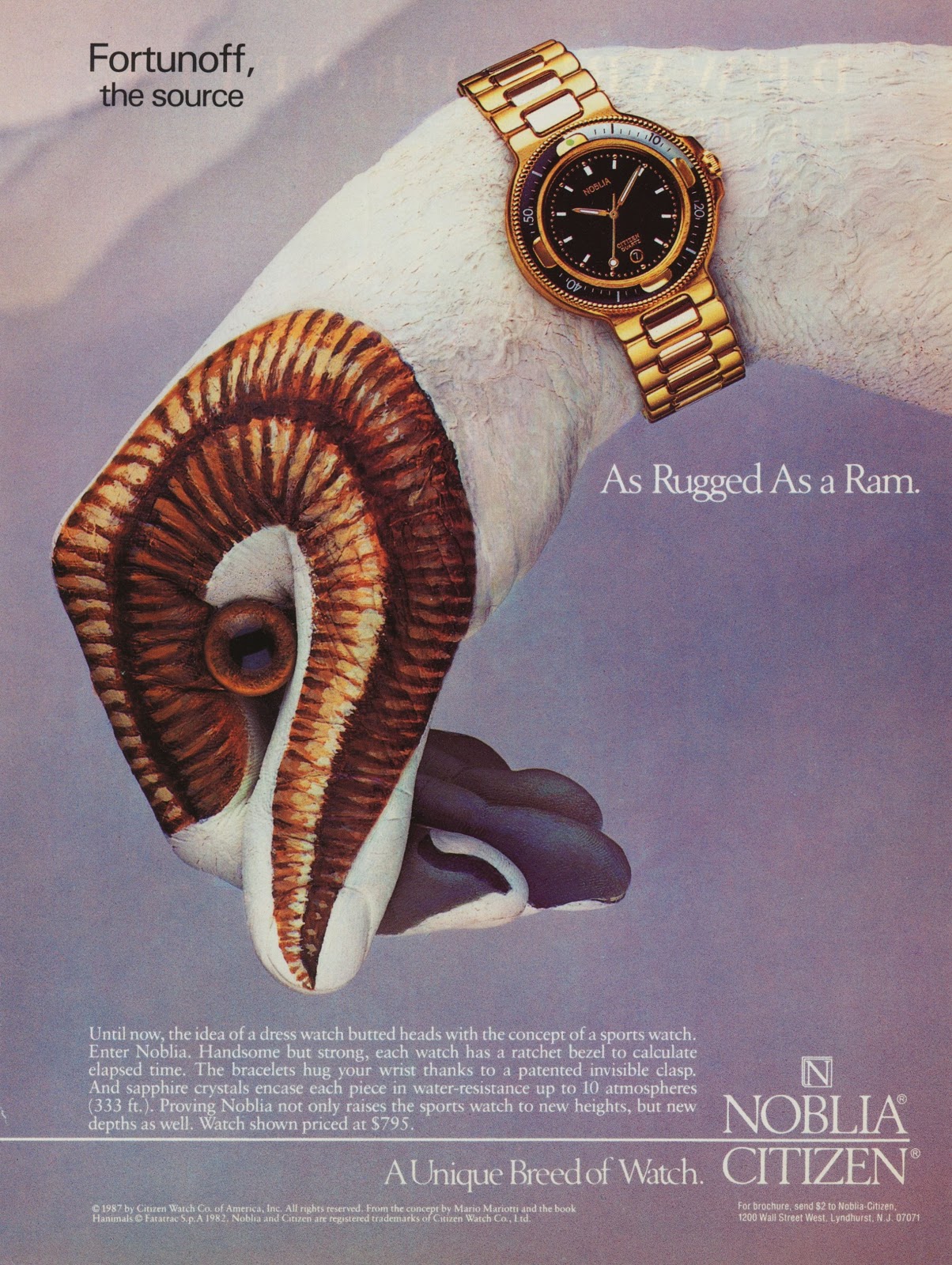 As Elegant As a Swan. 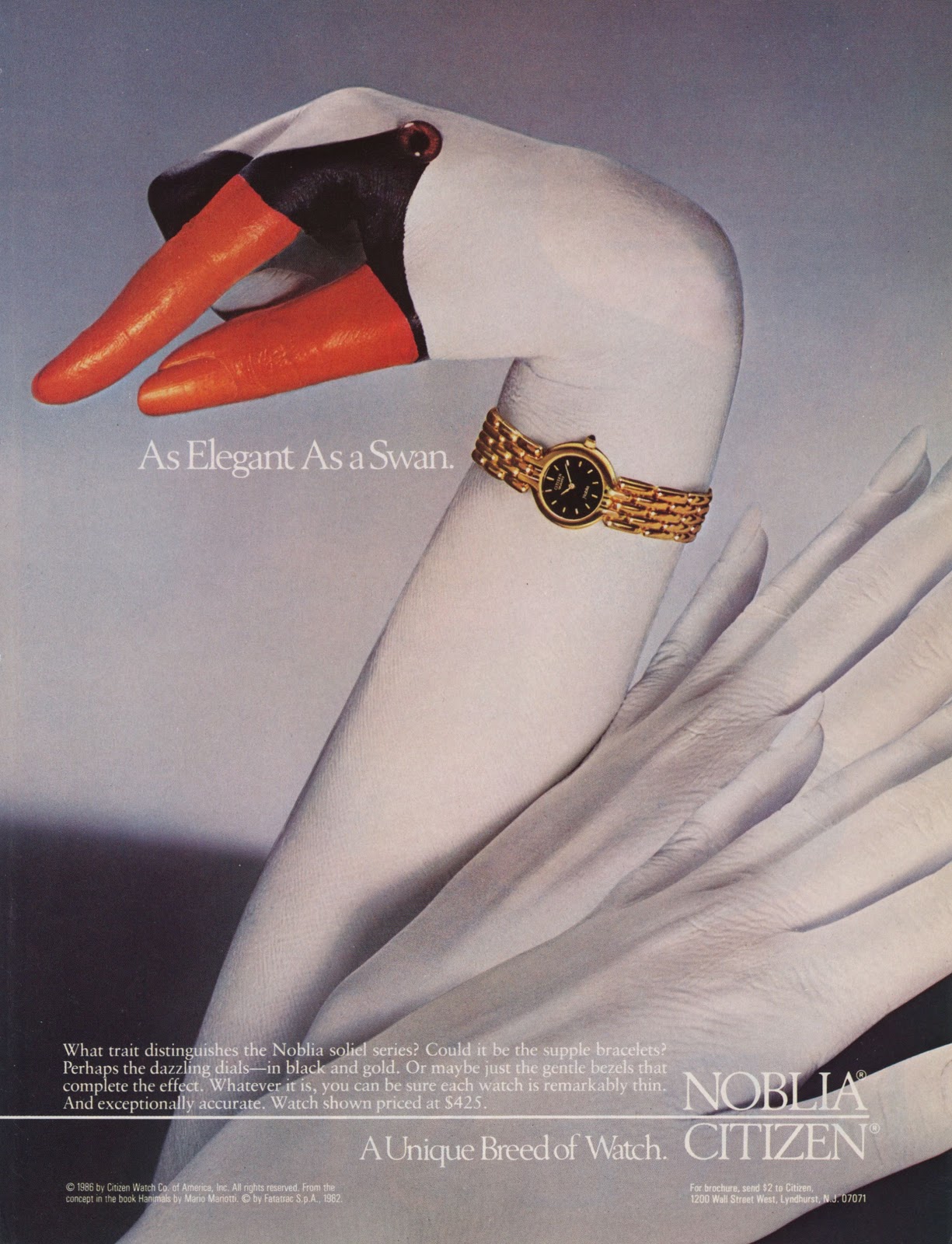 As Racy As a Thoroughbred. 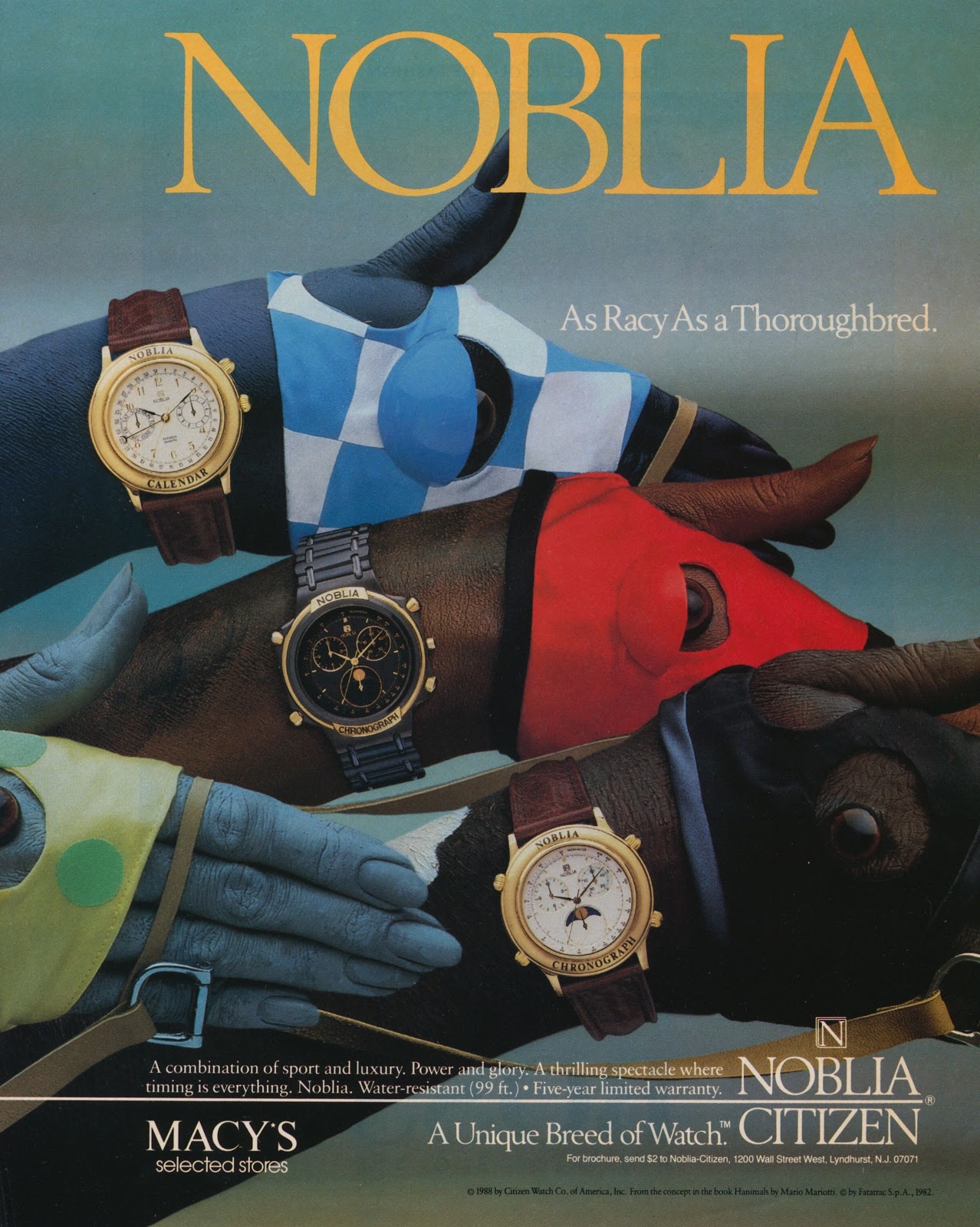 As Bold As a Zebra.
(two-page spread version) 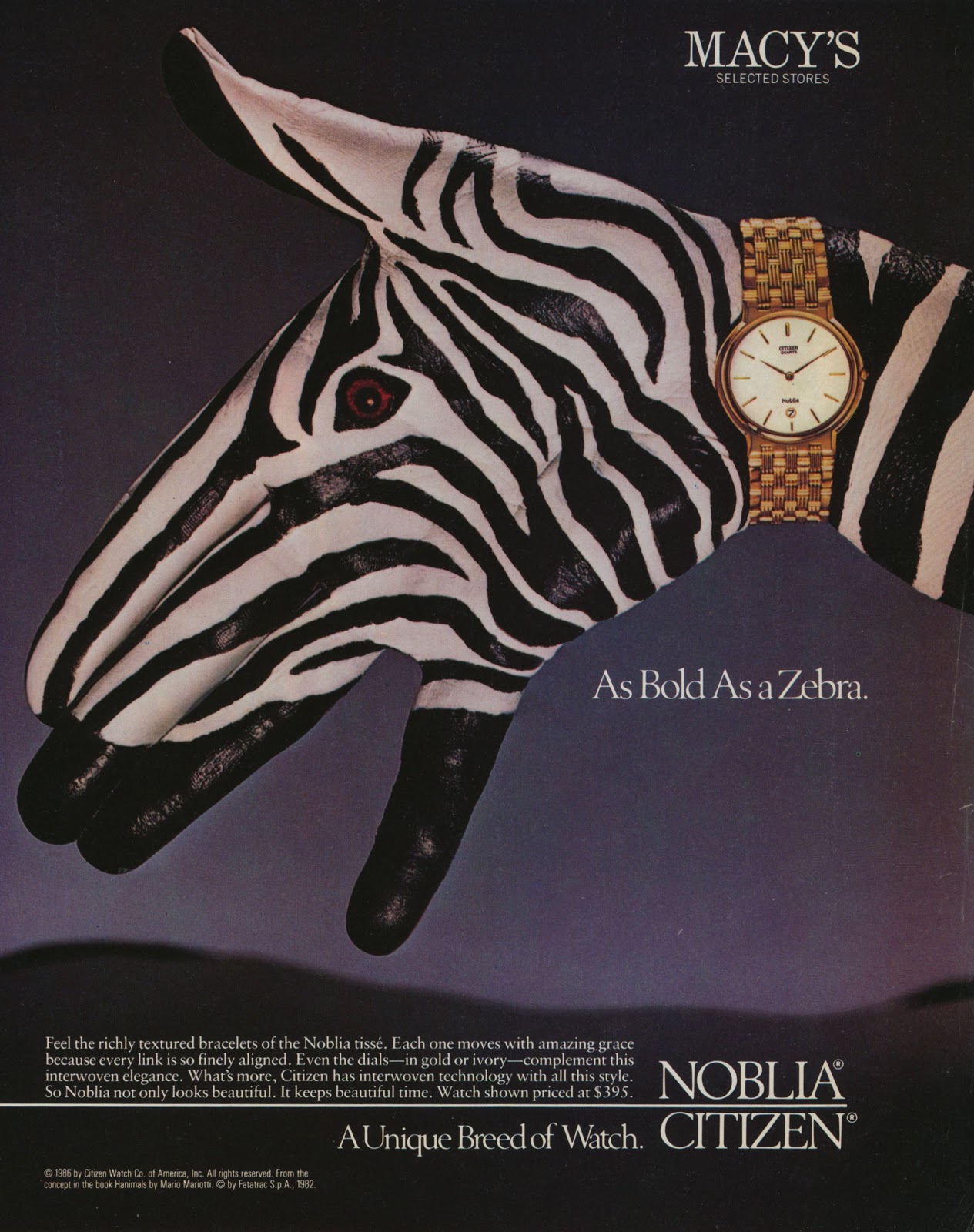 A Unique Breed of Noblia 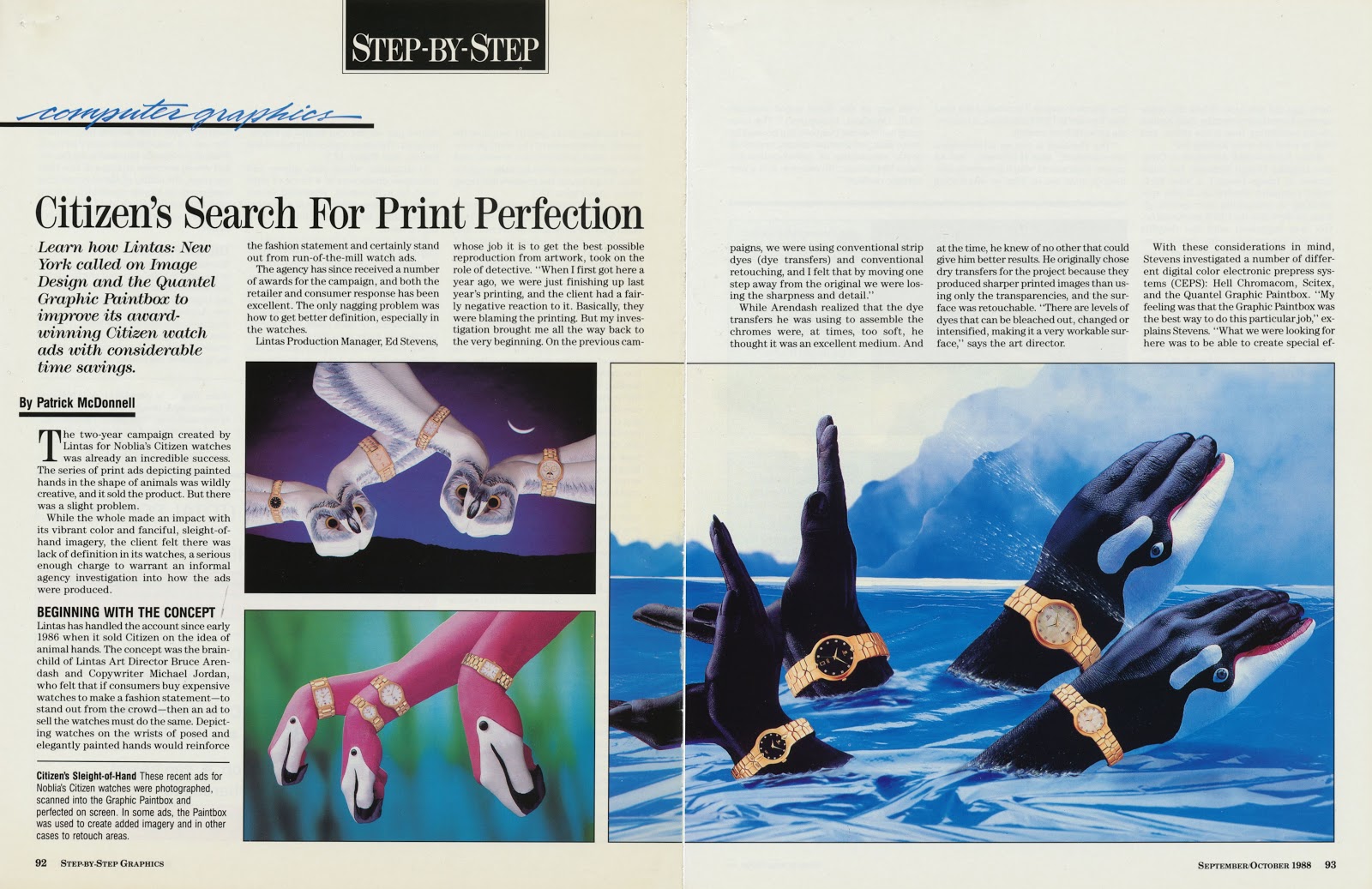 (Next post on Monday: Hellmuth Building)
Posted by Alex Jay at 8:00 AM