The First Woman Who Designed a United States Postage Stamp

In the 1920 census, Rawlinson’s maternal grandmother, a widow, was the head of the household and ran the bakery. Rawlinson’s mother was the bakery cashier. They continued to live at 368 West 120 Street.

All three women were recorded in the 1930 census at 536 West 113th Street in Manhattan. All of them were unemployed.

Rawlinson and her mother were involved with a national sorority, according to the Brooklyn Daily Eagle (New York), March 6, 1932:

Pi Omicron is a movement in adult education, now represented in 42 States, with a membership of about 40,000 women. Plans for the second national convention, to be held in Los Angeles next Summer, are now under way. Prof. Eugene Armfield, A. B., M. A.. Ph. D., is the program director of the New York City chapter.

Almost a month later, a related article was published in the Daily Eagle, April 3, 1932:


Greek Letter Clubs
The New York-Alpha Epsilon chapter of Pi Omicron national sorority will hold an afternoon tea and card party at the Hotel Wellington next Saturday from 3 to 5 o’clock. A small exhibition of the paintings of Miss Elaine Rawlinson will be held. The proceeds of the tea will go into the convention fund to send delegates to the national convention to be held in Los Angeles next Summer.

Rawlinson and her mother visited Germany. A passenger list, at Ancestry.com, said they sailed from Bremen, Germany on November 4, 1932. They arrived in New York City November 10. Their home address was 390 Riverside Drive, New York City.

The New York Times, January 13, 1934, said Rawlinson was the maid of honor at the wedding of Violet Jambor and George Sziklai.

The following day, Edward Alden Jewell, art critic of the Times, reviewed the annual exhibition of the National Association of Women Painters and Sculptors. He named several works and their creators, and mentioned Rawlinson. The Times, April 30, 1934, reported the annual student exhibition of Art Schools of the National Academy of Design: “Other young artists whose work shows distinct promise include…Elaine Rawlinson….”

Rawlinson was one of six students who received awards of merit at graduation of the Free Art Schools of the National Academy of Design, according the Times, May 3, 1934. Among her prizes were the $25 School Prize from the Life Schools (Painting from the Nude); $5 prize for Best Palettes and the Handling of Pigments; and $10 School Prize from the Composition Classes’ Decoration and Design category.

On April 15, 1936, Rawlinson and her mother returned from Bermuda. Their names and birth years were recorded on the passenger list; 1911 was on Rawlinson’s line.

The Allied Artists of America group show was reviewed in the Times, May 17, 1936. The reviewer said: “…it is very gratifying to find interspersed examples testifying to a spirit of more creative freshness, which reassures the eye that has become so wearied with facile cliches, with the unimaginative adherence to formula.” Among the artist and paintings named was Rawlinson’s, “Susan”.

The New York Sun, January 9, 1937, named Rawlinson as one of several New York guests registered at the Chateau Frontenac, in Quebec, for ski outings.

The Times, January 24, 1937, said Rawlinson was in a group show of portraits at the Decorators Club Gallery in the Squib Building, New York City. The March 17, 1937 Times said Rawlinson was in the twentieth exhibition at the Temporary Galleries of the Municipal Art Committee. A March 21, 1937 Times art review said there was an “academic tone” to the paintings on the fourth floor which included portraits by Rawlinson.


Miss Elaine Rawlinson, a young artist of 390 Riverside Drive, won first prize of $500 yesterday in the National Stamp Competition for a design for the one-cent stamp in the new Presidential series, it was announced by the Procurement Division of the Treasury Department in Washington, Section of Painting and Sculpture.

…The competition was for the first postage stamp of a proposed “Presidential Series.”…If completed, the series will include stamps portraying of the Presidents. The one-cent stamp is a portrait of Washington and the two-cent will portray Adams.

…Miss Rawlinson, still in her early 20s, is a former student of the National Academy of Design School and later studied mural painting at the Beaux-Arts Institute.

There were 1,122 artists competing for the three prizes offered by the United States Bureau of Engraving and Printing. A second article in the Times, October 3, 1937, said seventy-five designs were selected out the 1,122. That number was reduced to twelve then the final six. The members of the committee of award were Duncan Phillip of the Phillips Memorial Gallery, H.M. Southgate, president of the Bureau Issues Association; Mrs. Catherine L. Manning, philatelist, Smithsonian Institution; Carl Rollins, typographer, president of Yale Press, and John Taylor Arms. President Franklin D. Roosevelt, a stamp collector, chose the stamp design winner.

The Times said Rawlinson’s design “is something wholly ‘new’ in this country’s stamp history, according to government philatelists.” The specifications for the one-cent George Washington stamp required either a full-face view or profile. Rawlinson used the Houdon bust at Mount Vernon; “…but what stands out in her design, besides its simplicity, is the position of the head—at one side, leaving a comparatively large area to be filled with solid green. This green forms a good background for the block letters….” Absent were the engraving lines common in most stamps. Printing a solid background was a technical problem for the Bureau, which changed the solid background into parallel horizontal lines. Rawlinson’s Washington stamp was available April 25, 1938. 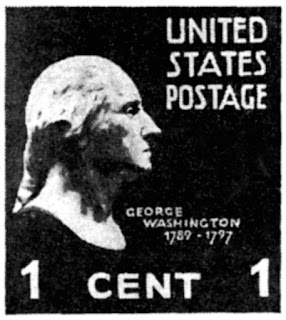 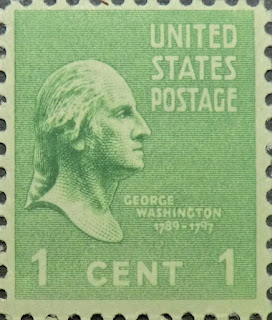 The Rhinebeck Gazette (New York), May 13, 1938, identified the people who translated Rawlinson’s design into the stamps.


…Although the design used on the half-cent, one cent and the one and one-half cent stamps is an adaptation of her work, Miss Elaine Rawlinson is given credit by the Government as the designer of the stamps. On the one cent stamp, John Eissler engraved the portrait and J. T. Vail the lettering. On the one and one-half cent stamp, L. C. Kauffman engraved the portrait of Martha Washington and Mr. Vail handled the lettering. No other announcements as to engravers on the balance of the stamps of the series has been made.

A timeline of the Presidential Series release dates is at the USPS site; scroll down to 1938.


Miss Elaine Rawlinson, whose prize winning design forms the basis of the new presidential series, will be the guest speaker at the May 12 meeting of the Women’s Philatelic Society, to be held at the Hotel Commodore.

Rawlinson and her mother spent part of their summer in Westport, New York. The Sun, June 11, 1938, said:


Miss Elaine Rawlinson of Riverside Drive, New York city, whose design for the recently issued series of one-cent stamps, featuring a profile of George Washington, was accepted by the Post Office Department, was a guest with her mother, Mrs. Thomas C. Rawlinson, over the Decoration Day weekend of Mark Whitman, president of the Westport Inn and Country Club and Mrs. Whitman, at their Garden Cottage in the Westport Inn park. Mrs. Rawlinson and her daughter are among the guests of previous seasons who will return to the Inn later in the season. 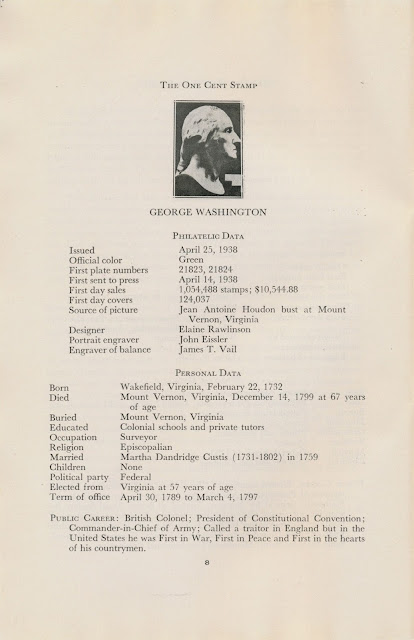 The Times, April 30, 1939, said Rawlinson was a member of the executive committee that was involved in the “Union Pacific” Wild West costume party at the National Arts Club. The money raised was for the scholarship fund to assist talented students in the visual and performing arts.

The following year, Rawlinson was involved in the Pan-American ball at the National Arts Club, as reported in the Sun, April 10, 1940.

Rawlinson’s design for the Philippines two-centavos stamp, featuring Jose Rizal y Mercado, was approved according to the Times, December 29, 1940. She submitted her design in the First National Stamp Design Contest conducted by the Asociacion Filatelica de Filipinas in cooperation with the islands’ postal authorities. 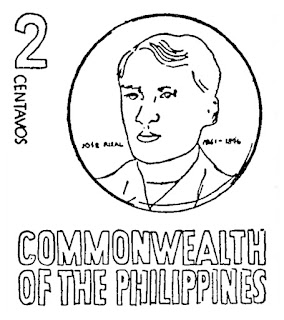 In the 1940 census, Rawlinson’s address was 34 Sutton Place, Manhattan, New York City. She was a freelance artist whose highest level of education was the third year of high school. Her mother, the head of the household, was an estate manager.

Rawlinson was a junior member of the National Arts Club. The Times, May 14, 1942, covered the award ceremony and said she received a $5 prize for photography.

According to the Social Security Death Index, Rawlinson, as Elaine R. Fisk, passed away October 19, 1989, and her last residence was Johnson City, Tennessee. Jim Fisk, Rawlinson’s son, wrote about her presidential stamps (here) and her struggles with arthritis (here).

National Postal Museum
Elaine Rawlinson article has a photograph of her