Henry “Harry” George Peter was born on March 8, 1880 in San Rafael, California, according to his World War II draft card. The same date was recorded on Peter’s World War I draft card.

Census, marriage, military and directory information are from Ancestry.com. 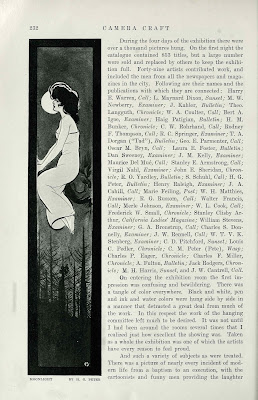 
Newspaper Artists Make Annual Exhibit
The annual exhibition work of the newspaper artists of San Francisco opened yesterday with a good attendance and much interest, in Calvary Church, at Fillmore and Jackson streets, and will continue until Saturday. This is the third annual exhibit of the Newspaper Artists’ League.

There are 267 subjects in the exhibition of sketches and drawings, and the first day’s sale was satisfactory. The exhibit is open both afternoon and evening.

The Judge
September 6, 1913
Revue of the Zoo by H.G. Peters
(follows contents page)

The Judge
October 18, 1913
Revue of the Tube Skirt by H.G. Peters
(follows contents page)
The Language of Flowers and Its Echoes by H.G. Peter
(precedes “The Modern Woman”)

The Judge
November 1, 1913
Revue of the Family by H.G. Peters
(follows contents page)


H. G. PETER
Mr. Peter is now a member of this organization. He has been added to our staff because of his wide experience as a black and white artist, and a colorist of infinite imagination. Mr. Peter is also a specialist in animal and Western subjects, which gives his prowess an added value and wider scope.

It is the aim of this organization to thus meet all demands upon it for highest class pictorial co-operation on any subject whatsoever.


Cartoonist Harry Peter Dies in N.Y.
Harry G. Peter, San Rafael-born cartoonist who drew “Wonder Woman,” died of a heart attack Thursday [January 2] in Staten Island, N.Y., it was reported today by Kenneth Irwin of San Rafael. Irwin is the husband of Peter’s niece Marie Peter Irwin. Peter, 77, had drawn “Wonder Woman” for 10 years, Irwin said. His parents were the late Louis and Louise Peter, who arrived in San Rafael in 1875 and later built the Peter Building https://calbricks.netfirms.com/brick.fortin.html at Fourth and C streets. He is survived by a sister, Marie F. Peter, who lives with the Irwins in the Peter Building. Peter worked as an illustrator for the old San Francisco Call, Irwin said, before moving to New York as a free-lance commercial artist in 1910. Funeral services will be held Tuesday in Staten Island.

Potrzebie
Wroten on the Wind


“Jim quit Keuffel & Esser when we got our studio; he thought it would be a nice little business for the two of us to do together. Our studio was Doc Marston’s office. We were on the 12th floor. The art studio where Harry G. Peter worked was upstairs, right over us on the 13th floor. They had another artist, a girl named Arlene, who did backgrounds for him. Harry G. Peter was a nice old gentleman; he was just a nice person. We went out to Doc’s home several times, but after Doc died we never kept in touch with the rest of the family. He had an assistant who helped him write stories; her name was Joye Hummel. She married, and I think she’s down in Florida someplace.


page 26: The artist he chose to draw the series was Harry G. Peter, whom Marston describes as “an old time cartoonist who worked with Bud Fisher on the San Francisco Chronicle,” and later did sports cartoons for Hearst.[15] Little specific information is available about Peter. Marjorie Wilkes, who worked as his letterer in the Marston Art Studios between 1944 and 1947, describes him as a “quiet, thoughtful and sensitive” man who never talked about himself.[16] He apparently liked and approved of Wonder Woman. Ms. Wilkes also indicates that he was working for the San Francisco Chronicle during the earthquake of 1906, and lived on Staten Island with his wife after they moved east.[17]

…Precisely how Peter was selected to draw Wonder Woman is uncertain. Ms. Wilkes suggests that Gaines may have asked various artists to submit their conceptions

page 27: of the new superheroine, and that Marston chose Peter’s work because it made Wonder Woman look appropriately attractive, athletic and intelligent. The affiliation between Peter and Marston is reported to have been a happy and productive one, and the results, seen in the early Wonder Woman stories, would certainly substantiate this claim.

Harry Peter is one of the most underrated artists in the comics field. He is particularly criticized for his flat, two-dimensional style and for his anatomy drawings. The main problem in not being appreciated, I would suggest, is that he was simply not interested in what might be termed “realistic” drawing or accurate technology, but rather in conveying the imaginative essence and psychological impact of whatever he was depicting….