Cornelia Josephine Hoff was born on June 22, 1903, in Concord, Massachusetts, according to Massachusetts birth records at Ancestry.com. Her parents were Anton J. Hoff and Pauline Christianson.

In the 1910 U.S. Federal Census, Hoff was the second of four daughters born to the Norwegian emigrant parents. Their father worked at odd jobs. The family resided in Concord on Barretts Mill Road.

The Hoff family had a fifth daughter in the 1920 census. Their address was unchanged.

In 1924 Hoff graduated from the Massachusetts Normal Art School in Boston. The Palette and Pen yearbook had Hoff’s photograph and this description:


Our own “Connie,” lives in North Acton, Mass. She attended Concord High and graduated from there in ’20. “Connie” is a worker, mastering every single subject in its turn. There has never been one turned down or laid aside yet, by “Connie.” She was Secretary of her class as a Freshman, Sophomore and Senior, and has helped on all the Spreads, too. “Connie” will proceed to tell the younger generation just how things are done. Gee, if we could only be students again!

The graduation was covered in the Christian Science Monitor, June 12, 1924. Hoff was one of eighteen women to receive a bachelor of science in education in the teacher-training department. Hoff was one of two students awarded the medal of honor in teacher training.

So far the earliest record of Hoff’s professional career was a listing in the Eastern Edition of Advertising Arts and Crafts (1927):

Boston city directories, from 1929 to 1937, said Hoff was a commercial artist at 383 Boylston Street in room six. Hoff illustrated several children’s books and mathematics textbooks including The Sunshine School (1928), Walks and Talks in Numberland (1929), and The Alpha Individual Arithmetics series.

The Boston Herald, October 12, 1930, reviewed the young artists exhibition at the Concord Art Centre and said, “…Some remarkable decorations for book pages are by Cornelia Hoff, daughter of one of the American Norwegian families numerous in Concord district, and already employed as illustrator by a leading text-book house.”

In the 1930 and 1940 censuses, Hoff lived with her parents in Carlisle, Massachusetts. In 1930 Hoff’s occupation was illustrator. She was a freelance commercial artist in 1940.

The Lowell Sun, September 21, 1942, reported the reception for the newly-elected pastor of the Carlisle Congregational Church, and said, “…At the end of the receiving line was Miss Irma D. Stanton with the guest book. This book was of original and clever design, the work of a church member, Miss Cornelia Hoff.”

During World War II and the 1950s, Hoff produced designs and illustrations for the Strathmore Paper company. One piece (below) was included in Modern Publicity 23 (1954). 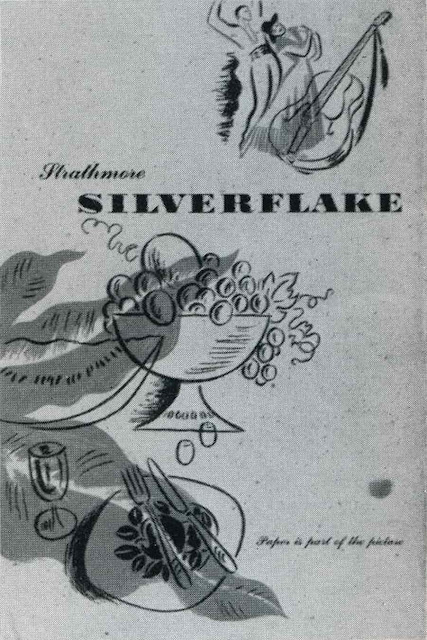 
Further Reading and Viewing
flickr
A wonderful collection of Cornelia Hoff photographs and artwork assembled by her niece.

(Next post on Monday: Marcia Snyder, Artist)
Posted by Alex Jay at 8:00 AM