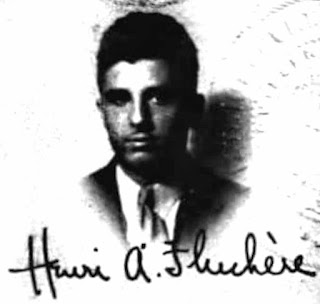 Henri Andre Fluchere was born July 31, 1914 in Marseille, France, according to his Petition for Naturalization at Ancestry.com. On November 11, 1925, Fluchere, his parents, Armand and Emma, and sister, Odette, sailed aboard the S.S. Aquitania from Cherbourg, France. They arrived in the port of New York City on November 27.

Fluchere attended Quincy High School in Quincy, Massachusetts. He was mentioned in the school yearbook, Golden Rod, November 1931 and January 1933. Fluchere graduated in June 1933 and contributed two illustrations to the yearbook. 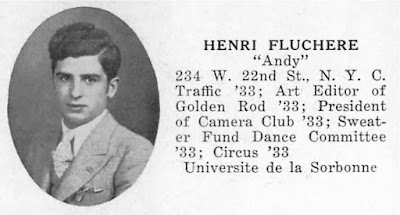 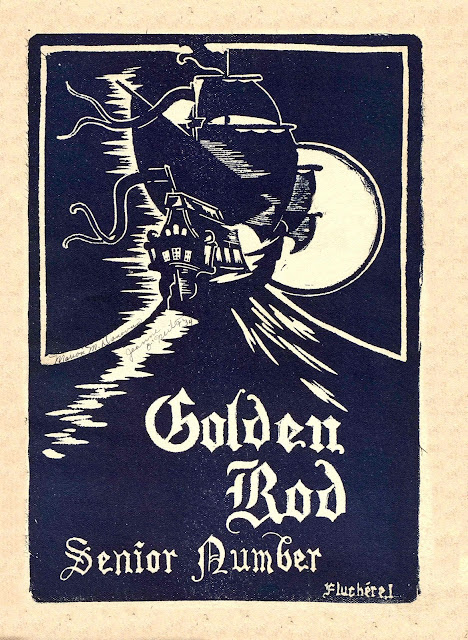 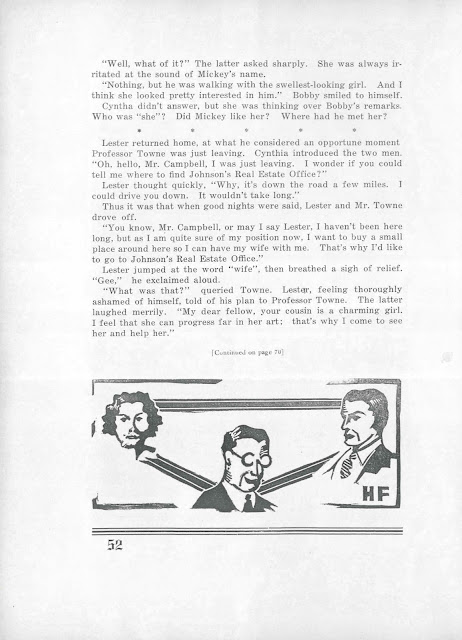 Henri Fluchere, ’33, art editor of the Golden Rod, resides now in New York City. He attends Brooklyn College where he is captain of the hockey team.

Fluchere filed a Petition for Naturalization on September 1, 1936. Fluchere stated that he had resided in New York County since June 30, 1933. His occupation was commercial artist and residence at 234 West 22nd Street, New York City. Fluchere was naturalized on December 23, 1940.

Fluchere enlisted in the army on April 28, 1942. According to Fluchere’s son, Michael, his father served in the “Military Intelligence as an Interpreter (French) as a Master Sergeant with the 28th Infantry Division. After the 28th Infantry Division crossed the Rhine River into Germany, his services were no longer needed and he was reassigned to The Stars and Stripes Newspaper in Paris as an illustrator and artist. After returning from World War II, he worked for Superman Magazine as an illustrator.” Something About the Author said Fluchere received the Purple Heart. According to the Department of Veterans Affairs BIRLS Death File, Fluchere was discharged December 11, 1945.

Fluchere married Maud Elliot Hall (a musician) on September 4, 1946. Earlier, the Philadelphia Inquirer, May 3, 1946, published the engagement announcement. On August 2, 1946, the Inquirer reported the upcoming September wedding. A full account of the marriage appeared in the Inquirer on September 5, 1946.

The ceremony was solemnized at half after two o’clock, with Rev. David Braun officiating.

The bride, who was given in marriage by her father, wore a period sown of ivory tone slipper satin, the model featuring a square neckline, with short sleeves and a train suspended from the shoulders. The gown was trimmed with heirloom duchess lace. Her tulle veil fell from a lace cap which had been worn by her great-grandmother, the late Mrs. Julia Ward Howe, and she carried a bouquet of roses and bouvardia.

Grisella C. Hall, who acted a s maid of honor and only attendant for her sister, wore a frock of aqua taffeta, made on tailored lines, with a high neckline. She carried a bouquet of chrysanthemums in autumn shades and her headdress was an artistic arrangement of matching flowers.

Mrs. Hall chose a graceful black marquisette gown, with a matching hat, the latter trimmed with flowers in variegated colors. With this went an orchid corsage. The bridegroom’s mother also chose black in a floor-length crepe gown, with a ribbon-trimmed hat of the same color. She, too, wore a corsage of orchids.

Murray Boltinoff, of New York, served as best man. There were no ushers. A small reception at the home of the bride’s parents for members of the immediate families followed the ceremony. Upon their return from a wedding trip, the couple will make their home in New York.

Fluchere worked at National Comics beginning in 1946. Something About the Author said Fluchere attended Columbia University from 1946 to 1948.

The Daily News (Tarrytown, New York), March 1, 1949, reported Fluchere’s upcoming talk in the column, Happenings Here and There in the Village.


Comic Books—Henri A. Flushers [sic], commercial artist and production manager of National Comics, will tell the story behind the tremendous volume of comics produced today, to the Irvington Kiwanians at their meeting in the Hotel Florence at 7:15 P.M. tomorrow. He is also expected to discuss the recent trend to legislative control of comics.

Fluchers brought illustrations of every kind of art used commercially, including photographs, half tones, line drawings, color reproductions and several others.

He was expected to speak on comic books, but touched only briefly on that subject when he said that his company was very much opposed to the bill now in the Legislature, to control comics. He also said that his company employs a child psychologist to go over every strip and suggest improvements and changes.

The Irvington Gazette (New York), November 5, 1953, noted Fluchere’s new home, “Mr. and Mrs. George Hinckley of Oak street moved on Monday to Chicago. They have sold their home to Mr. and Mrs. Henri A. Fluchere who will occupy it shortly.”

Popular Science published Fluchere’s tip in the August 1961 issue, and his article in January 1962.

The Daily News, March 11, 1969, profiled Fluchere who ran unsuccessfully for mayor of Irvington. Mayoral candidate Henri Fluchere is no stranger to village government. He served as trustee from 1958–1960 and was acting mayor during the 1959–60 year. He also served as public safety commissioner while on the board.
During the 21 years he has lived in Irvingion, Mr. Fluchere has been active in community affairs. He served as chairman of the Irvington Historical Week in 1960. He has been a president and vice president of the Parent Teacher Association as well as serving as membership chairman and program chairman.
Mr. Fluchere is a charter member of the Irvington Human Rights Committee a board member of the Friends of the Irvington Library, and a member of the selection committee for the Ambassadors Program. Last year he joined the Irvington Kiwanis Club. He is also a member of the Greenburgh Community Action Program and a member of the Greenburgh Lay-Clergy group.
A member of the national executive committee of the American Veterans Committee, Mr. Fluchere is also a member of the American Institute of Graphic Arts and an associate member of the American Society of Enologists.
A sports booster, he led the campaign to acquire a scoreboard for the high school playing field.
He served for six years as vestryman at St. Barnabas Episcopal Church where he is now director of acolytes.
The 54-year old Mr. Fluchere is an author, illustrator and designer, specializing in scientific and engineering textbooks. He attended Quincy, Mass., schools. His professional training was received at City College, Brooklyn College and Columbia University.
During World War II he served three and one-half years in the European theater with the 128th Infantry Division. He holds the Purple Heart decoration.
Mr. Fluchere, his wife, Maud, and their three children live on Oak Street.

Something About the Author said Fluchere wrote “The Westchester Winetaster,” a weekly column in Westchester newspapers. He was a member of the American Wine Society.

The Patent Trader (Mount Kisco, New York), February 15, 1973, noted this event, “The wine-tasting will be conducted by Henri Fluchere, a wine expert whose weekly column appears in The Weekly News.”

Fluchere also conducted workshops as reported in the Courier and Freeman (Potsdam, New York), November 23, 1976, “We enjoyed a workshop with Henri Fluchere, wine writer of the Consumer Wineletter and noted author. His guest speaker was Marcia Mondavi of the Robert Mondavi Winery in California.”

Fluchere passed away November 25, 1991. He was laid to rest at Saint Barnabas Episcopal Church Memorial Gardens. His wife passed away on June 17, 2018.


Books illustrated by Fluchere
How To…
Jack Woodford
Arco Publishing, 1951

You and Your Cells
Leo Schneider
Harcourt Brace & World, 1964

The Story of the United States Flag
Wyatt Blassingame
with Victor Mays
Garrad, 1969