Eric Pape was born Frederick Ludwig Moritz Pape Jr. on October 17, 1870, in San Francisco, California, according to his passport application at Ancestry.com. 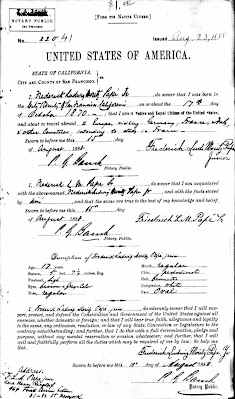 Pape’s father operated a business selling groceries and liquors in San Francisco on the northwest corner of Jackson Street and Battery Street as recorded in the 1887 San Francisco directory. Pape was listed as an art student. The family resided at 2109 Leavenworth Street.
A passport was issued on August 23, 1888 to Pape who planned to further his art training in France. His art training and early art career were examined in Brush and Pencil, March 1899.

At some point Pape moved to New York City. He was listed in the 1897 New York City directory as an artist who had a studio at 939 8th Avenue, and resided at 181 West 87th Street. After a period of time Pape settled in Boston.

Pape was profiled in The Art Interchange, May 1900. The profile was illustrated with rare photographs of Pape, Monroe and their Boston studios. In 1899 he established the Eric Pape School of Art in Boston. 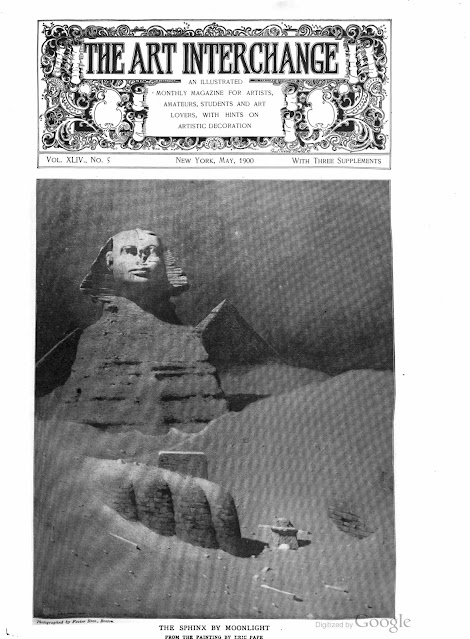 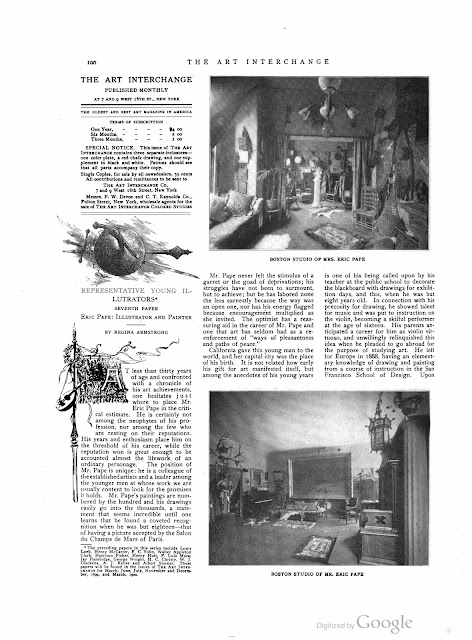 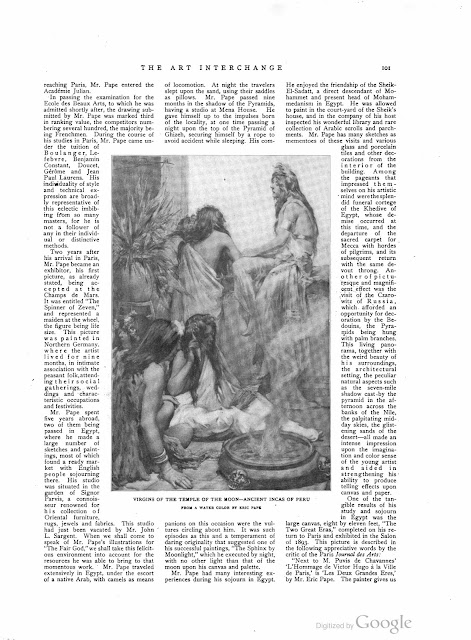 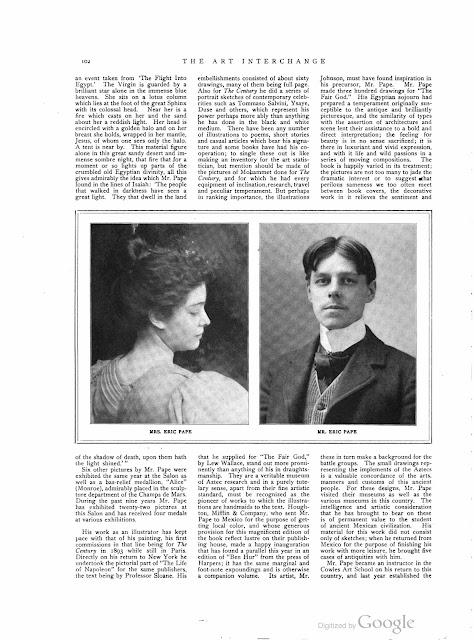 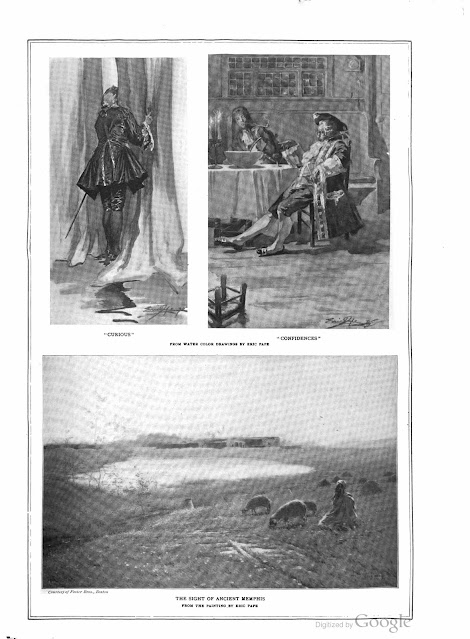 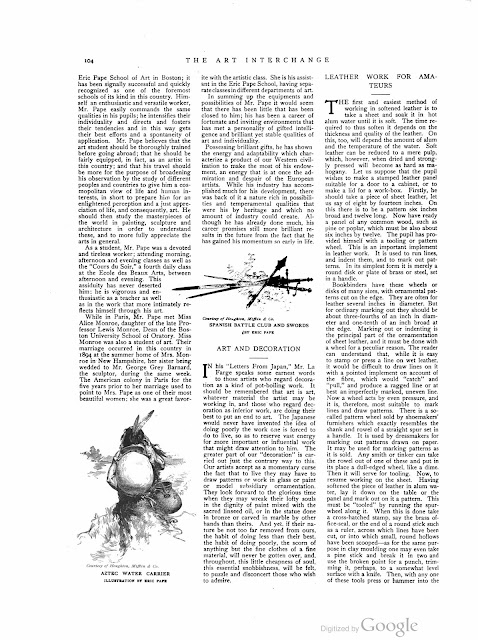 The passing of Pape’s wife was noted in the American Art Annual, Volume 9, 1911.

Pape, Alice Monroe.—A painter, died at her home, The Plains, Manchester-by-the-Sea, Mass., on May 17, 1911. She was born in Boston and studied art in that city under Dennis Bunker and George H. Clements, and in Paris under Bouguereau, Robert-Fleury and Lazare. She passed seven years in Europe, mostly in Paris and Switzerland. She married Eric Pape, the painter, and her sister is the wife of the sculptor, George Grey Barnard. She was a pianist and double bass viola-player.

The Chelsea, Massachusetts birth register, at Ancestry.com, recorded her birth date as March 22, 1867. An obituary was published on May 18 in the Boston Transcript.

Eric Pape, widely known as an artist and stage designer, was married on Friday of last week to Miss Alice Bryne, actress and authoress. The ceremony was performed by the Rev. Dr. Vincent C. Lahey at the Little Church Around the Corner, and the friends of the couple learned only yesterday that the marriage had taken place. …

His bride, Alice Byrne, is an artist and actress and the author of several  books for children. She has appeared here with Lou Tellegen in “The King of Nowhere” and several other plays. Mr. and Mrs. Pape will live at Manchester-by-the-Sea, in Massachusetts.

Pape was listed in the 1924 Boston city directory at 247 Newberry Street. The following year the directory said he moved to New York City. Directories for 1926 and 1927 have an “E Pape” at 957 2nd Avenue in Manhattan.

Eric Pape, the artist who founded the Eric Pape School of Art in 1898 and was its director until 1913, died Monday morning in the City Hospital on Welfare Island, to which he was removed on Friday after collapsing from a heart attack while walking on Eighth Avenue near Fortieth Street. He never regained consciousness. His age was 68.

Mr. Pape, who had exhibited his pictures in Paris, Munich and many American cities, was born in San Francisco. He received his art education in Paris in the studios of Boulanger, Lefebvre and Doucet and at the Ecole des Beaux Arts under Gerome and Laurens.

After teaching for a year in the Cowles Art School in Boston, Me. Pape came to New York and started his own school, of which he was the chief instructor. He was also a stage designer, his work in this field including the settings for the production of Percy Mackaye’s “Canterbury Pilgrims,” given in honor of President Taft at Gloucester, Mass., in 1909.

In 1895 he designed the scenery for one of the earliest productions of “Trilby,” which was presented in Sherry’s ballroom, Alice Monroe Pape, the artist’s first wife, who died in 1911, appeared as Trilby and the late Evart Jansen Wendell acted the Laird.

Mr. Pape had long been  member of The Players, for which he was proposed by Mark Twain. He also was a member of the United Arts Club of London and a fellow of the Royal Society of Arts of London.

Surviving are his widow, who was Alice Byrne at their marriage in 1920; a son by his first wife, Moritz Pape, and a bother, August Pape, both of San Francisco.