In March 1990 I received a telephone call from Byron Preiss who described the book he was producing with Harvey Kurtzman. I jotted down the title, names of the artists and what he wanted for the cover design. William Stout’s art would be in a circle with the title above it. Above the title would be a strip with characters from the stories.

Tracing paper with thumbnail sketches of the cover design and title lettering. 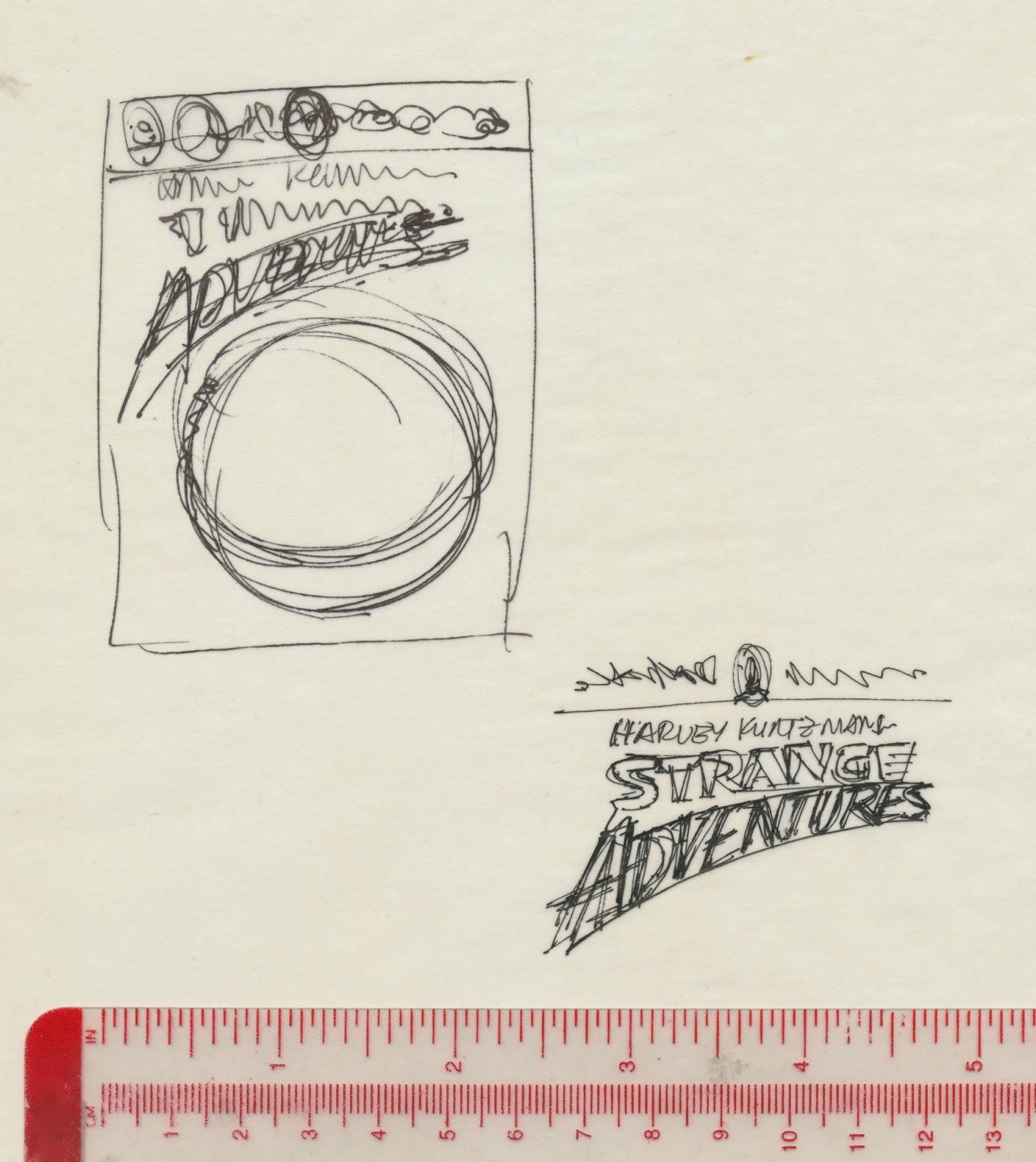 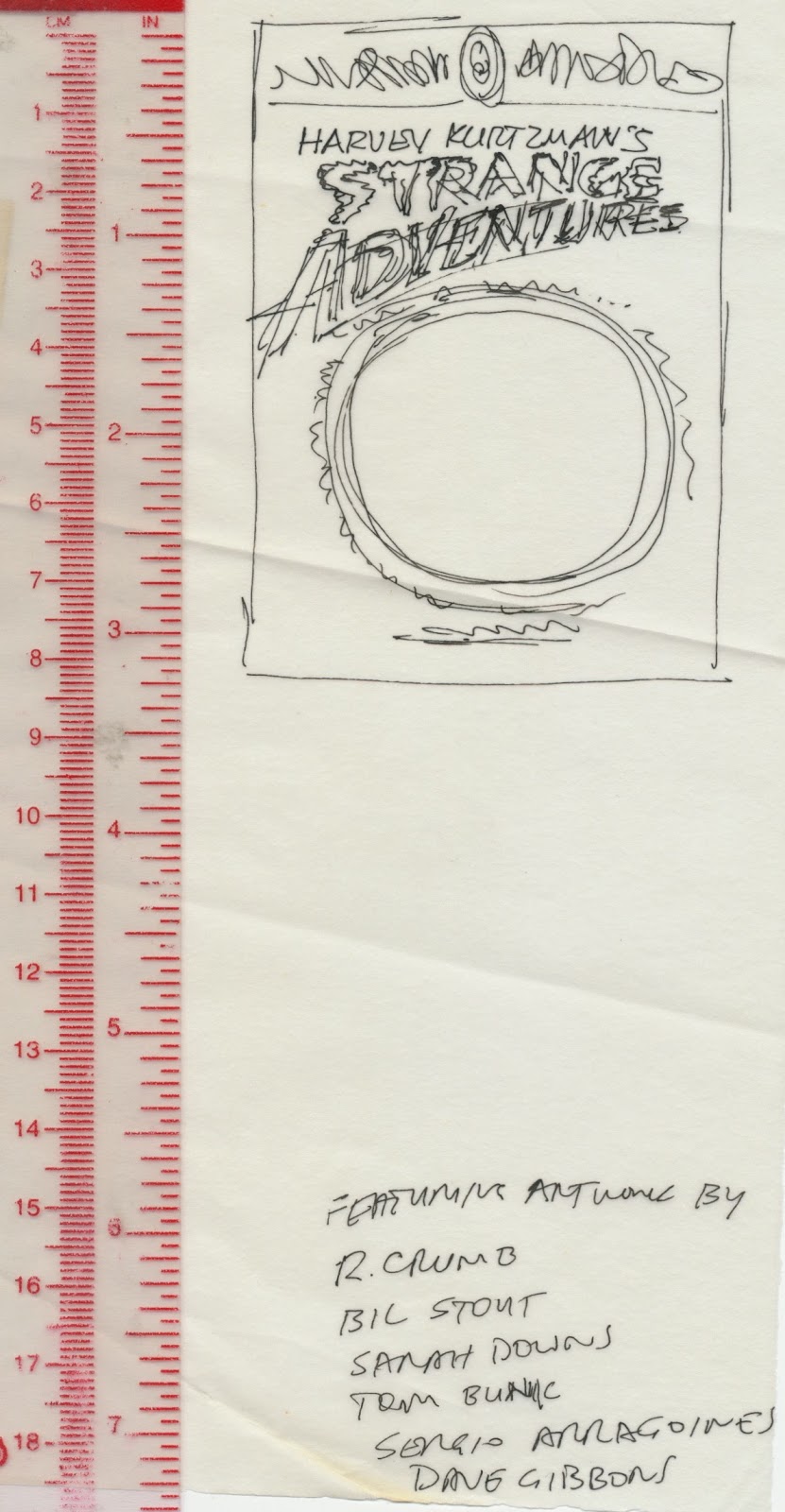 Comp lettering of the title. 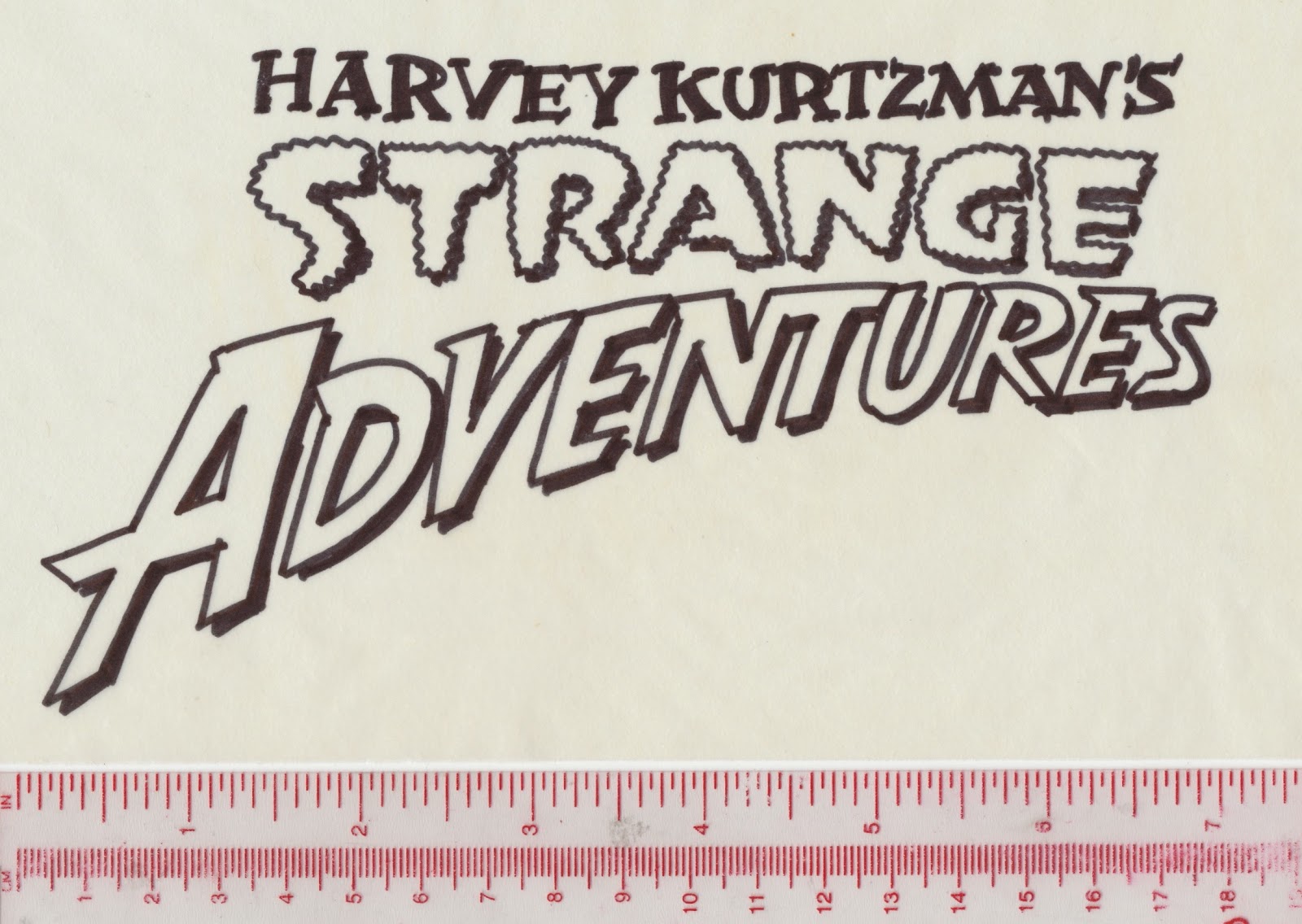 Photostat of Stout’s artwork with comp lettering around it. 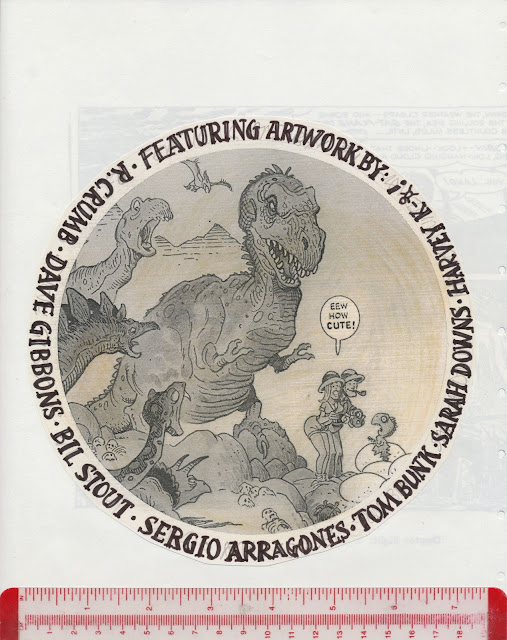 The various elements were assembled into the cover design.
The design was nixed and a new direction was forthcoming.
Stout’s illustration would be used on the back of the dust jacket. 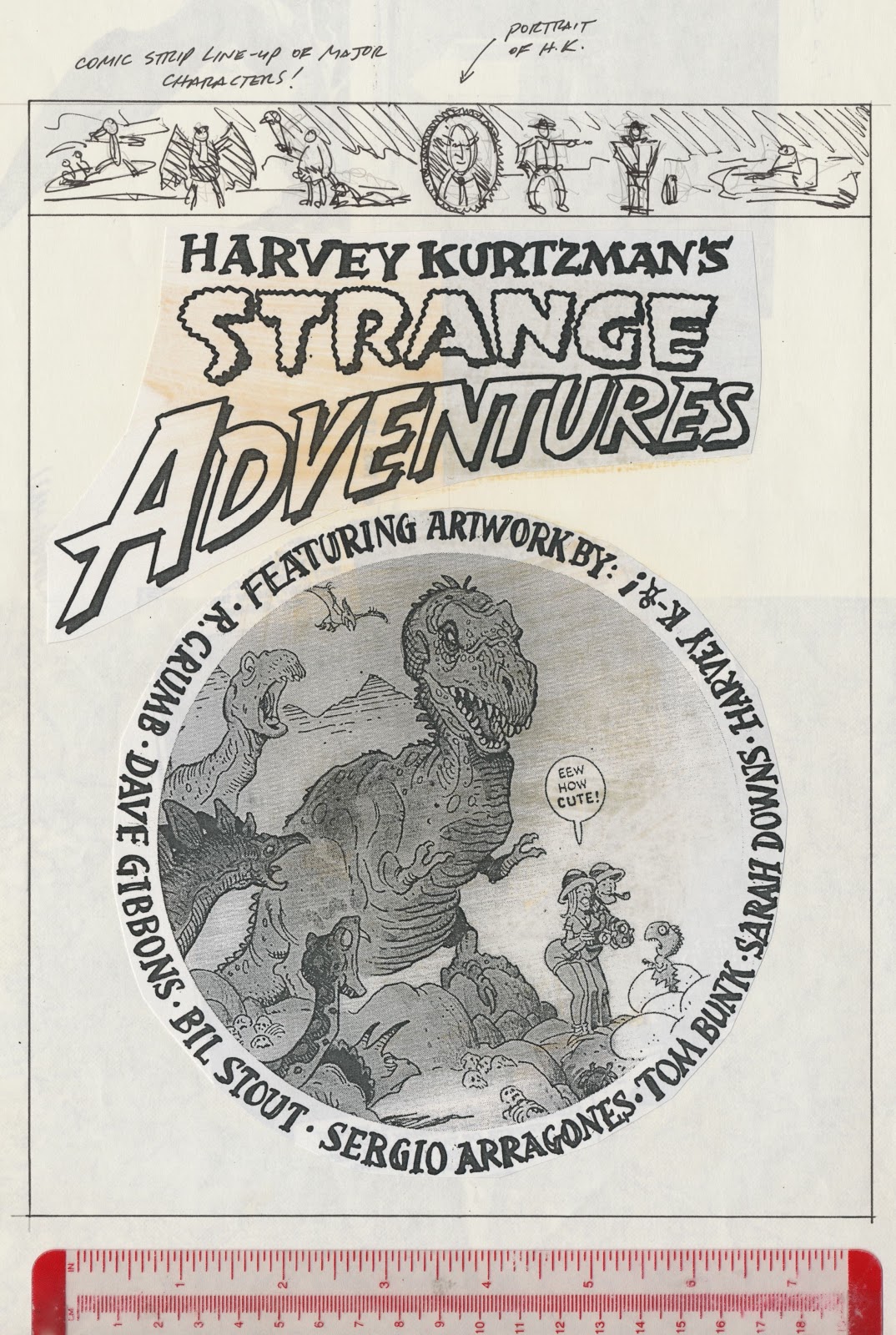 Byron called and referred to the EC Comics covers with the portraits of the characters in semi-circles and their names below. The Strange Adventures cover would feature eight artists. He added that Stout was sending in a illustration of the Silver Surfer for the cover.

Sketches of the new cover concept and title lettering designs. 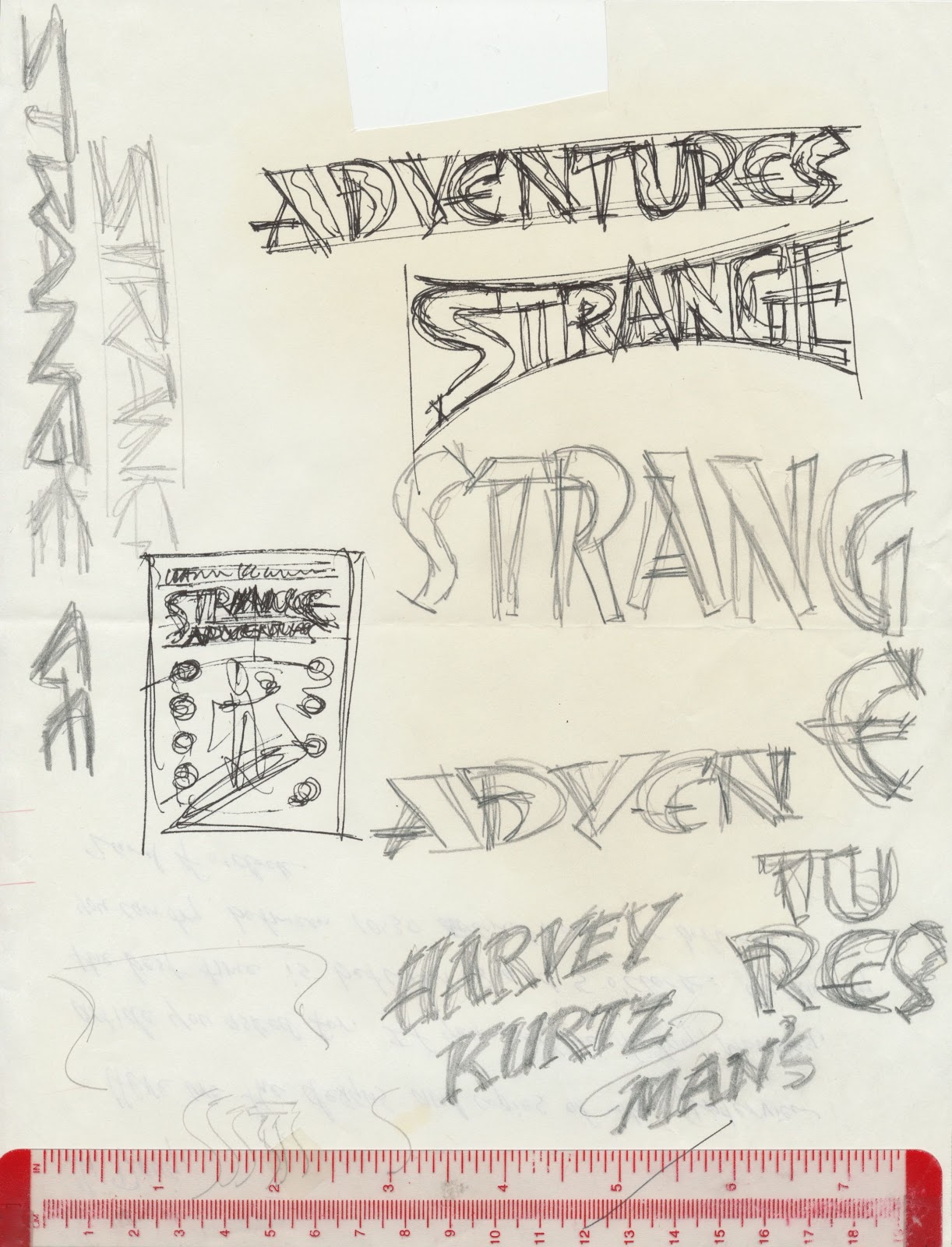 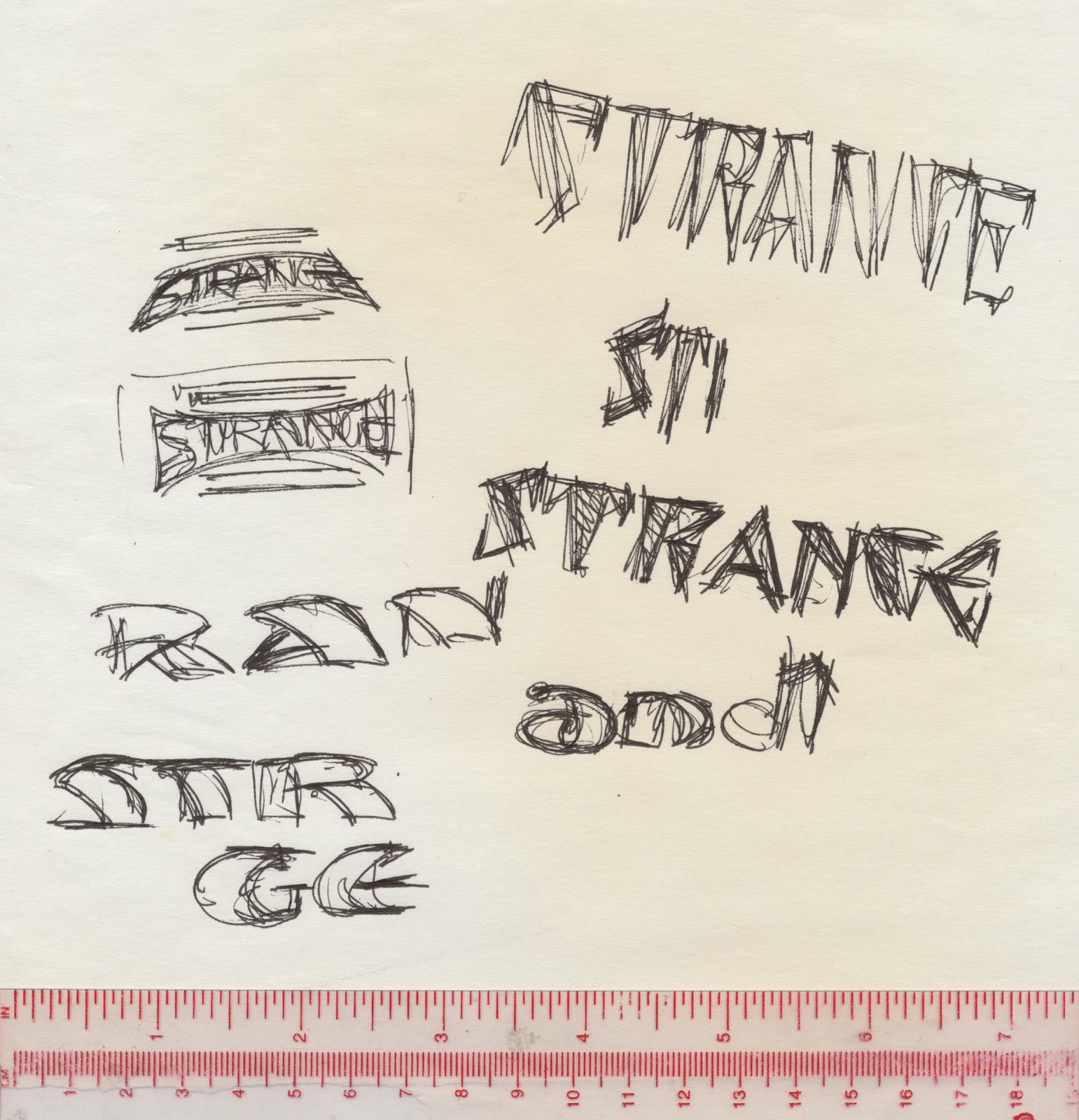 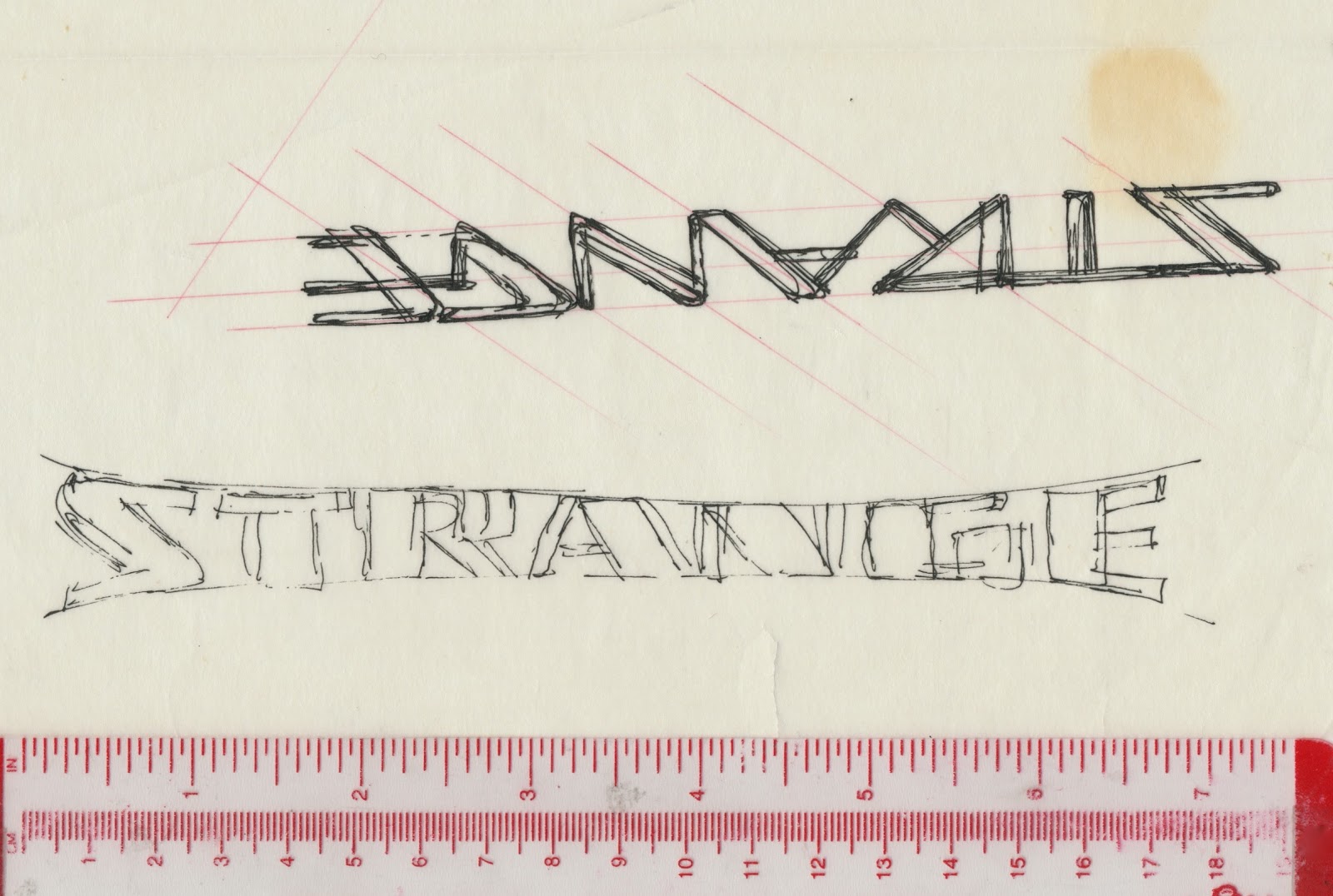 Getting close to the final form of “Adventures”. 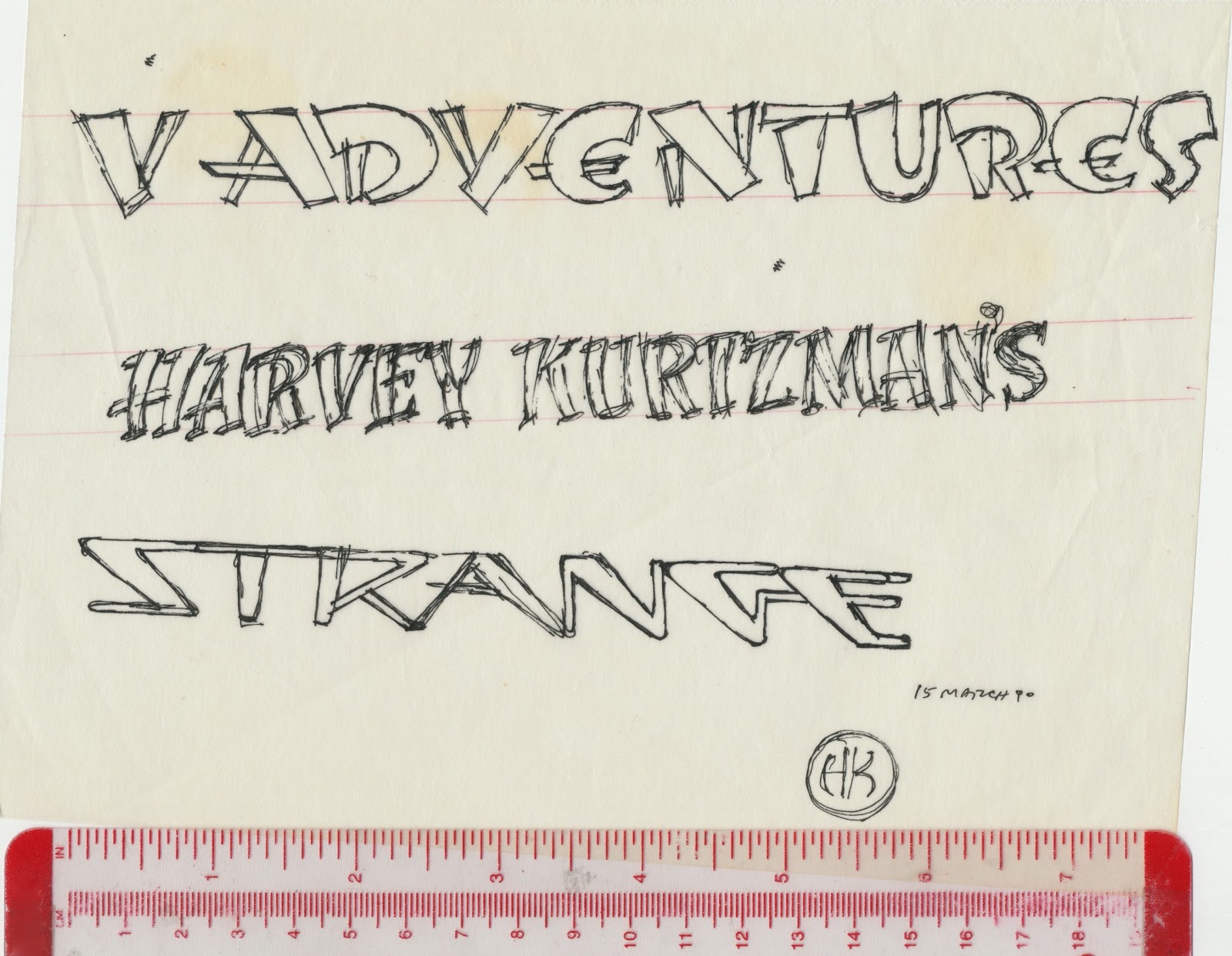 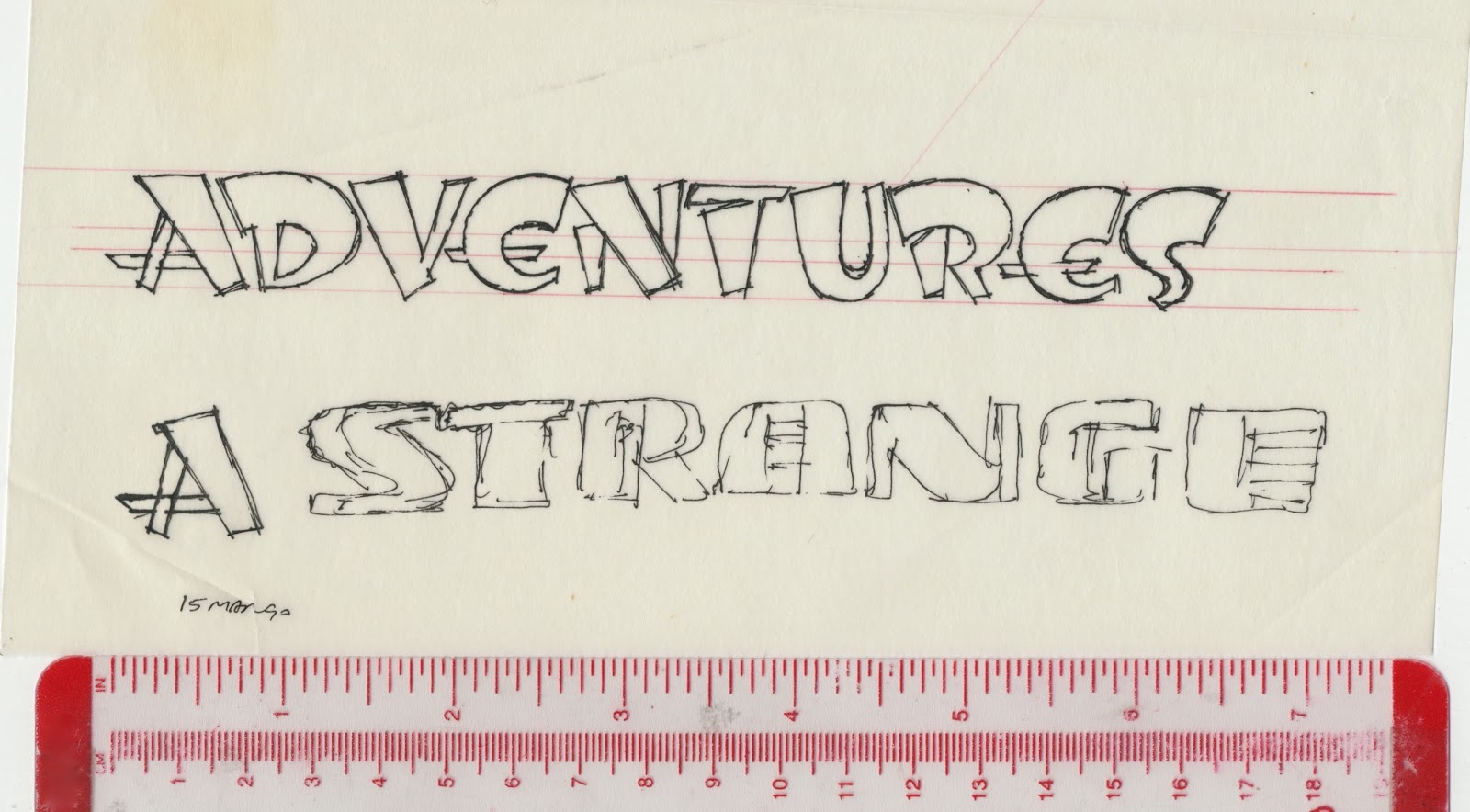 Here is a good example of the title lettering not working as a whole. 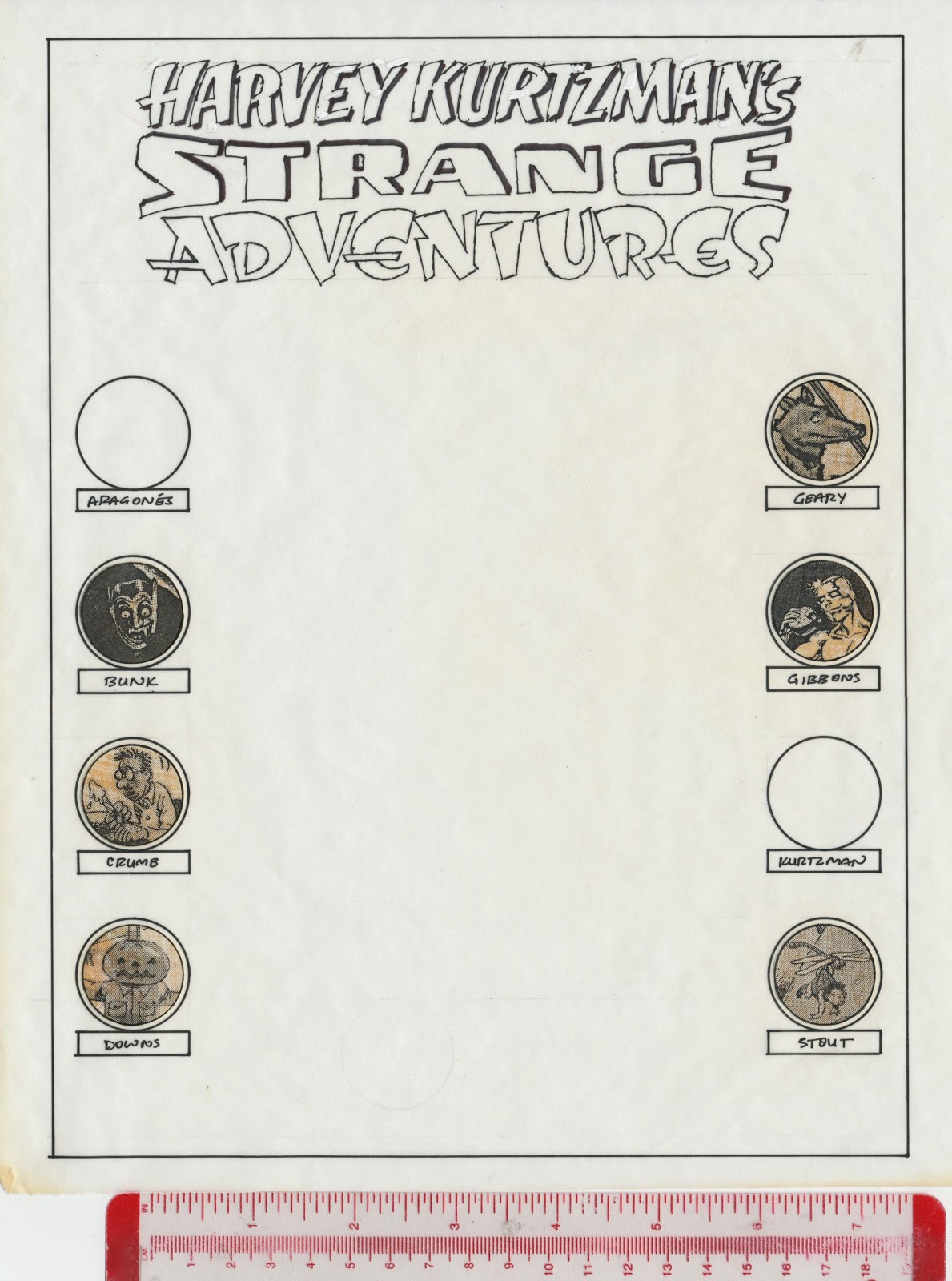 Alternate versions did not work either. 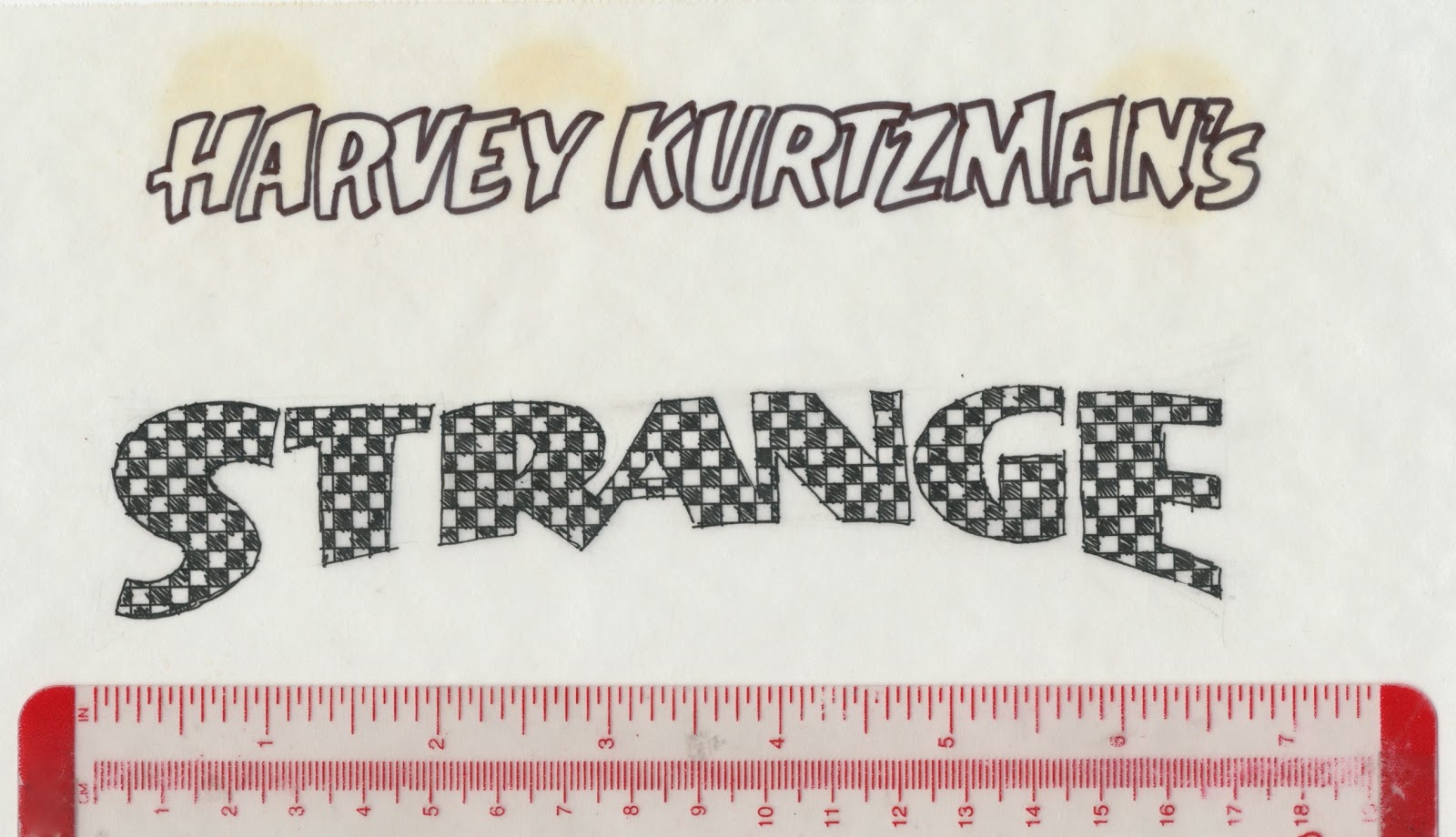 Back at the drawing board, I decided to get away from a cartoony
treatment of Harvey’s name, and try a different style for “Strange.” 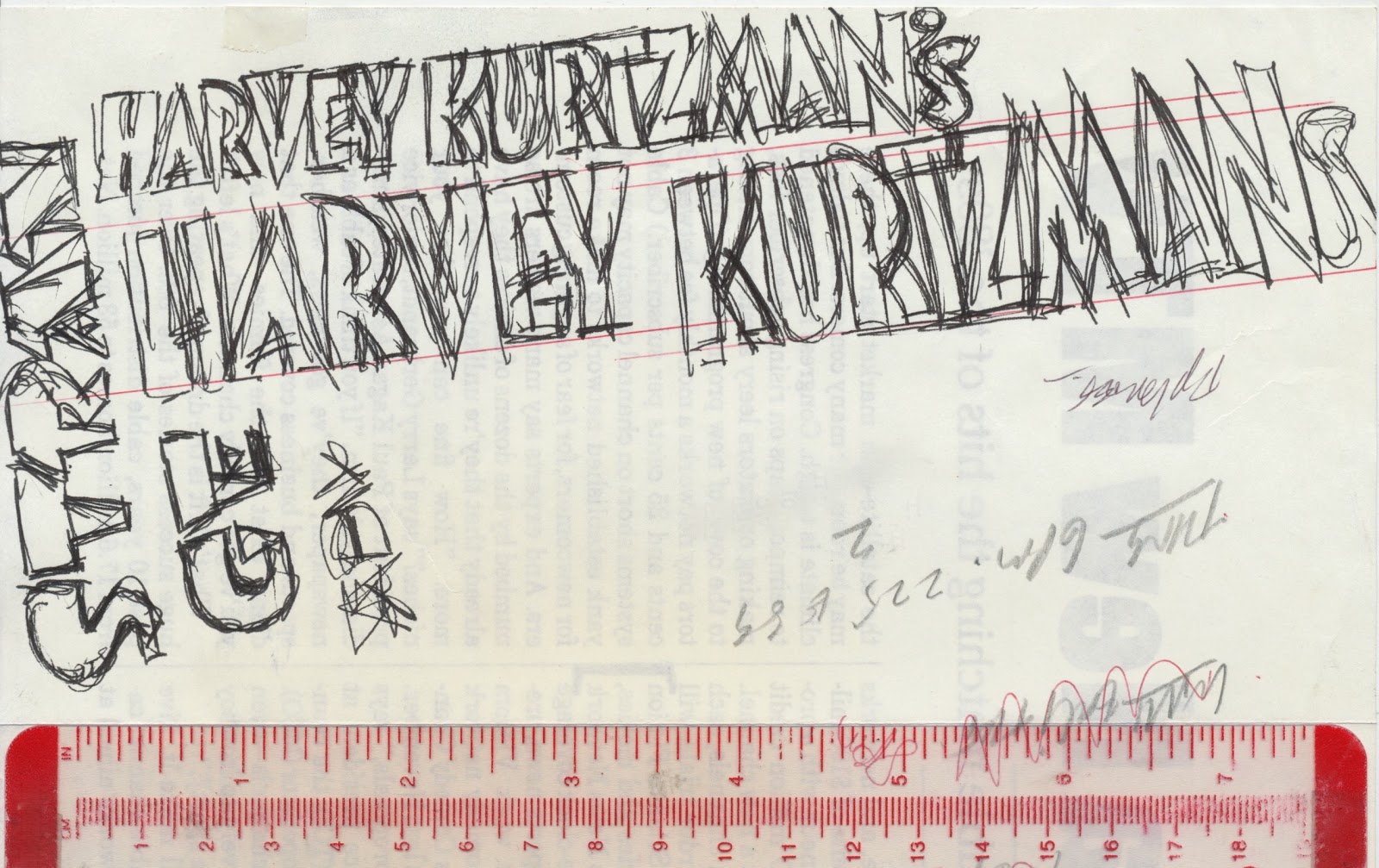 In this sketch I was refining individual letters. The “M”
was a reference, of sorts, to the MAD logo on the comic book.

The “M” is evolving, and the “s” no longer touches the “N”.
I found the “Strange” letterforms I was looking for. 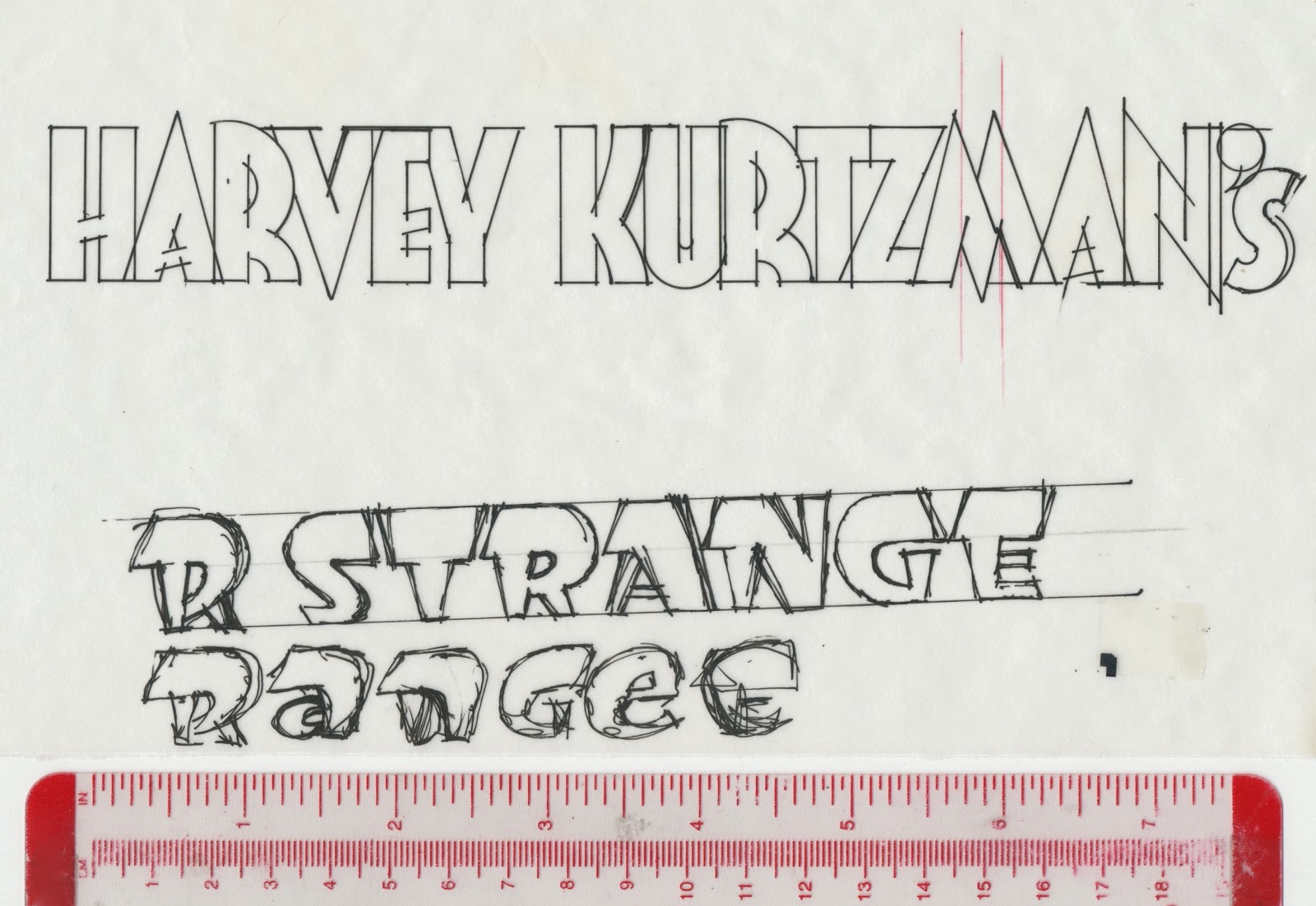 Tight comp lettering of “Harvey Kurtzman’s”.
“Strange” on an arc with “Adventures’ below it. 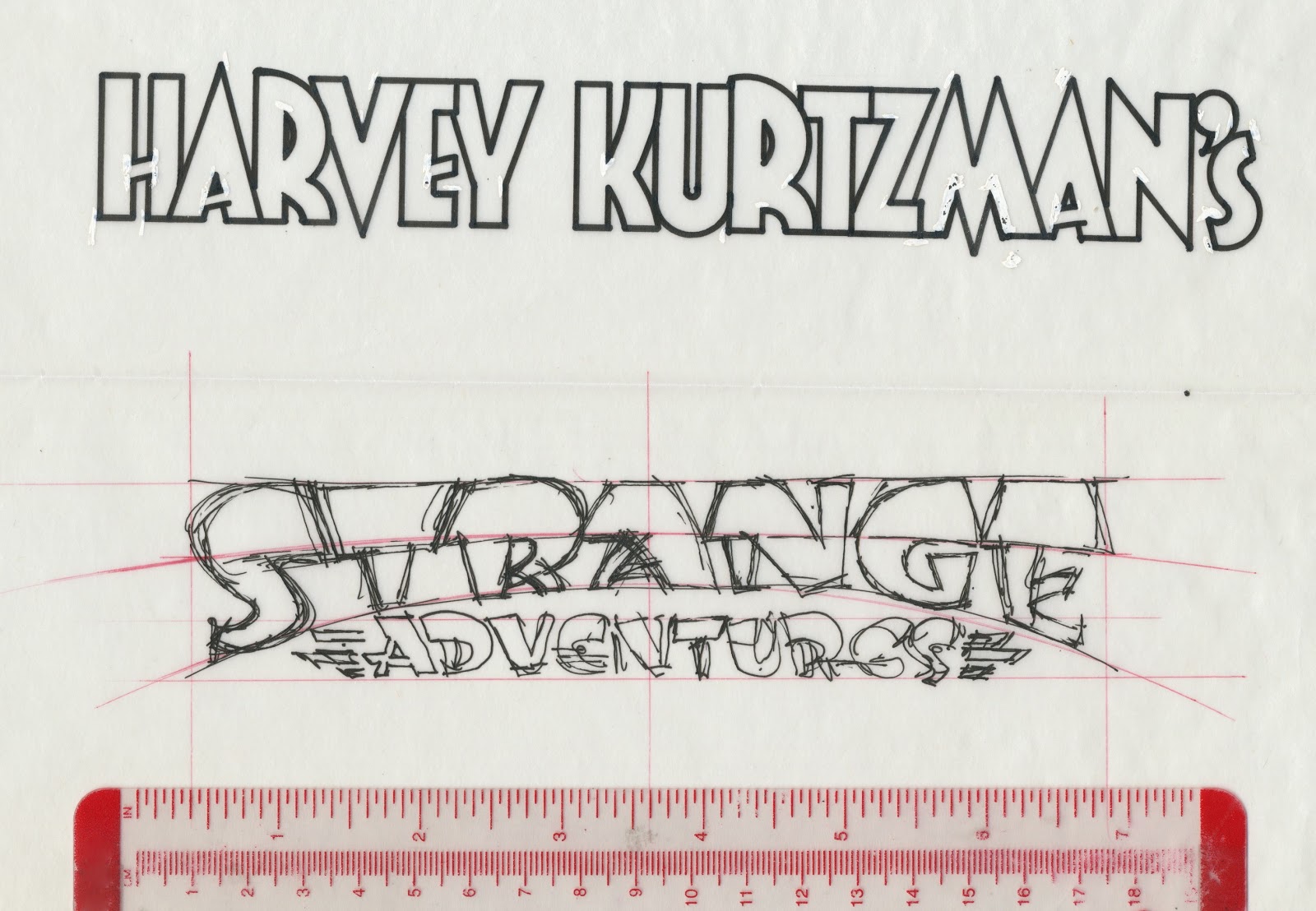 Tight comp lettering of “Strange” with some
of the white gouche touch-ups chipped off.

Photocopy of the revised title lettering with Stout’s new illustration. 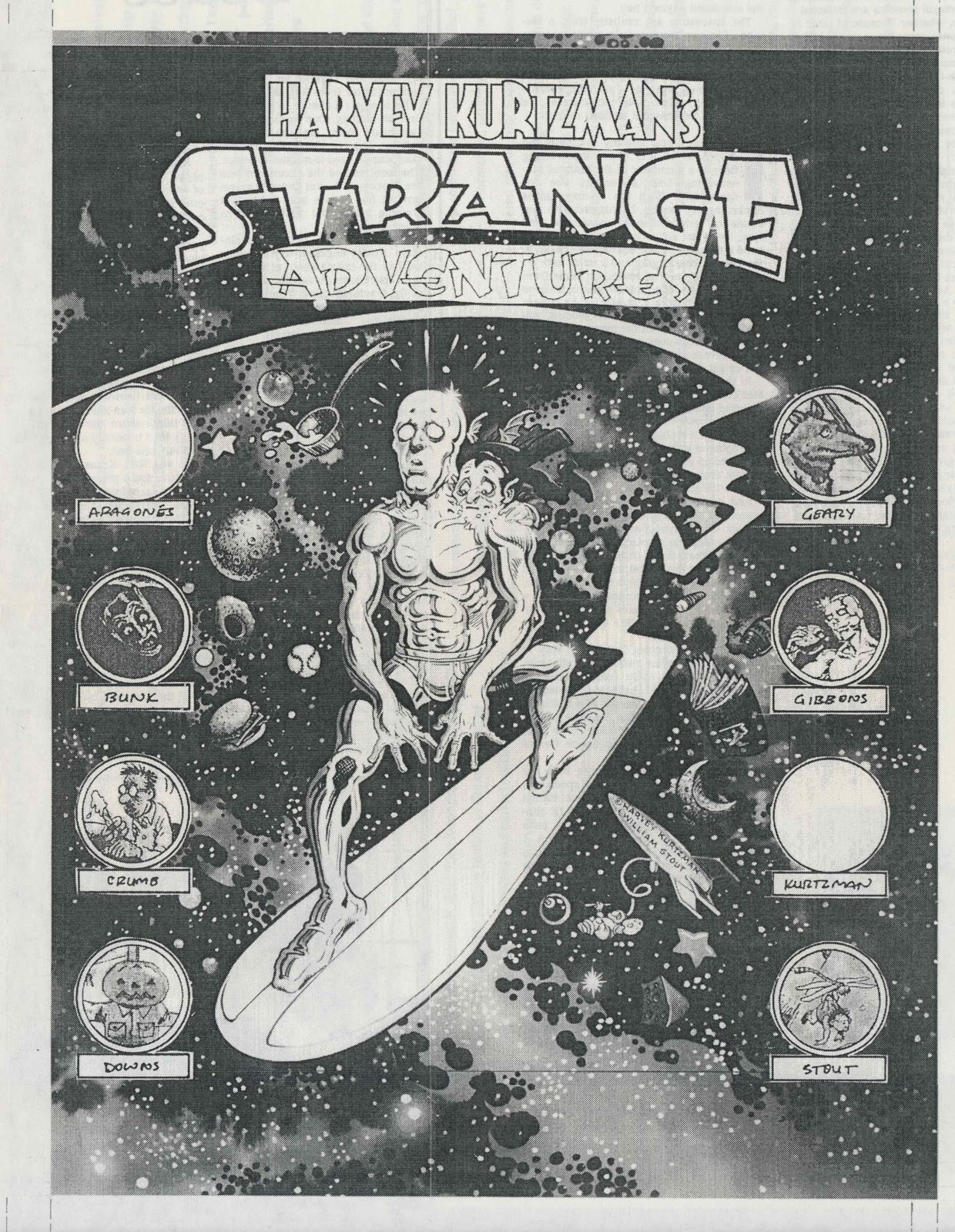 Each line of the title was drawn separately.
The comps were enlarged on a photocopier.

Each photocopy was positioned on a light box then a piece of vellum placed over it.
The inking was done with Rapidograph pens and corrections with white gouche. 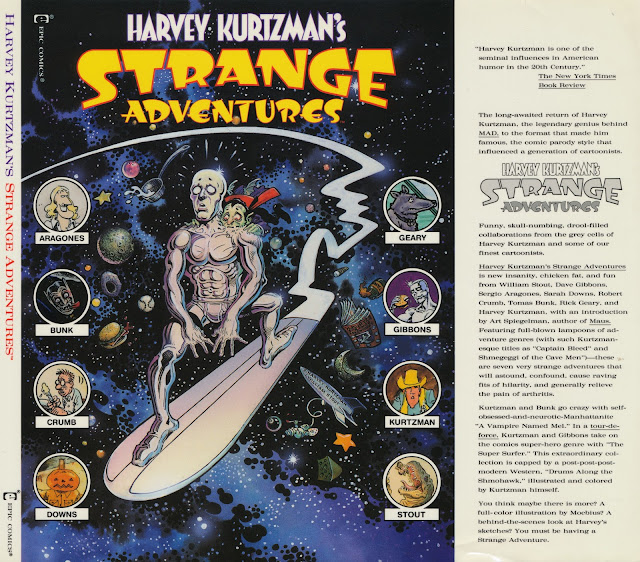 Dust jacket back cover and flap. 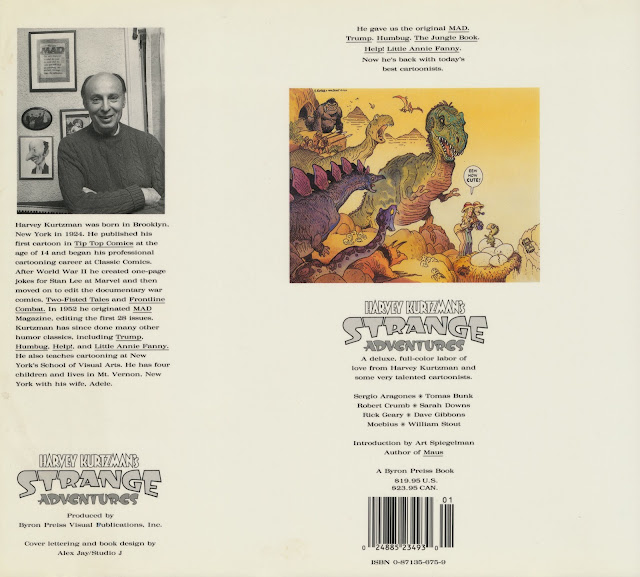 Harvey and Byron were open to suggestions for the book’s endpaper.
I had the book and flyer for Glenn Bray’s, The Illustrated Harvey
Kurtzman Index, so I suggested using the cover art. And they agreed. 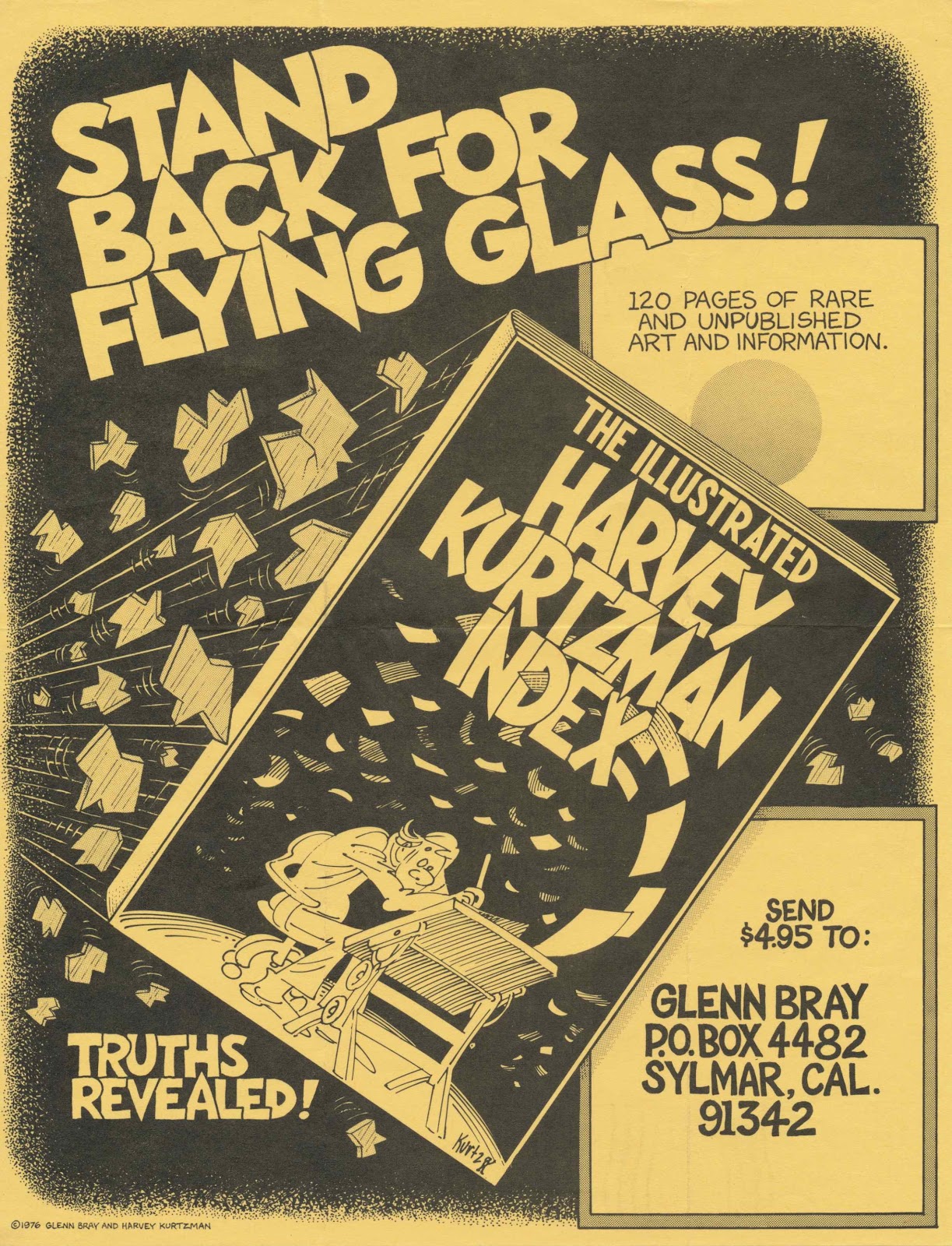 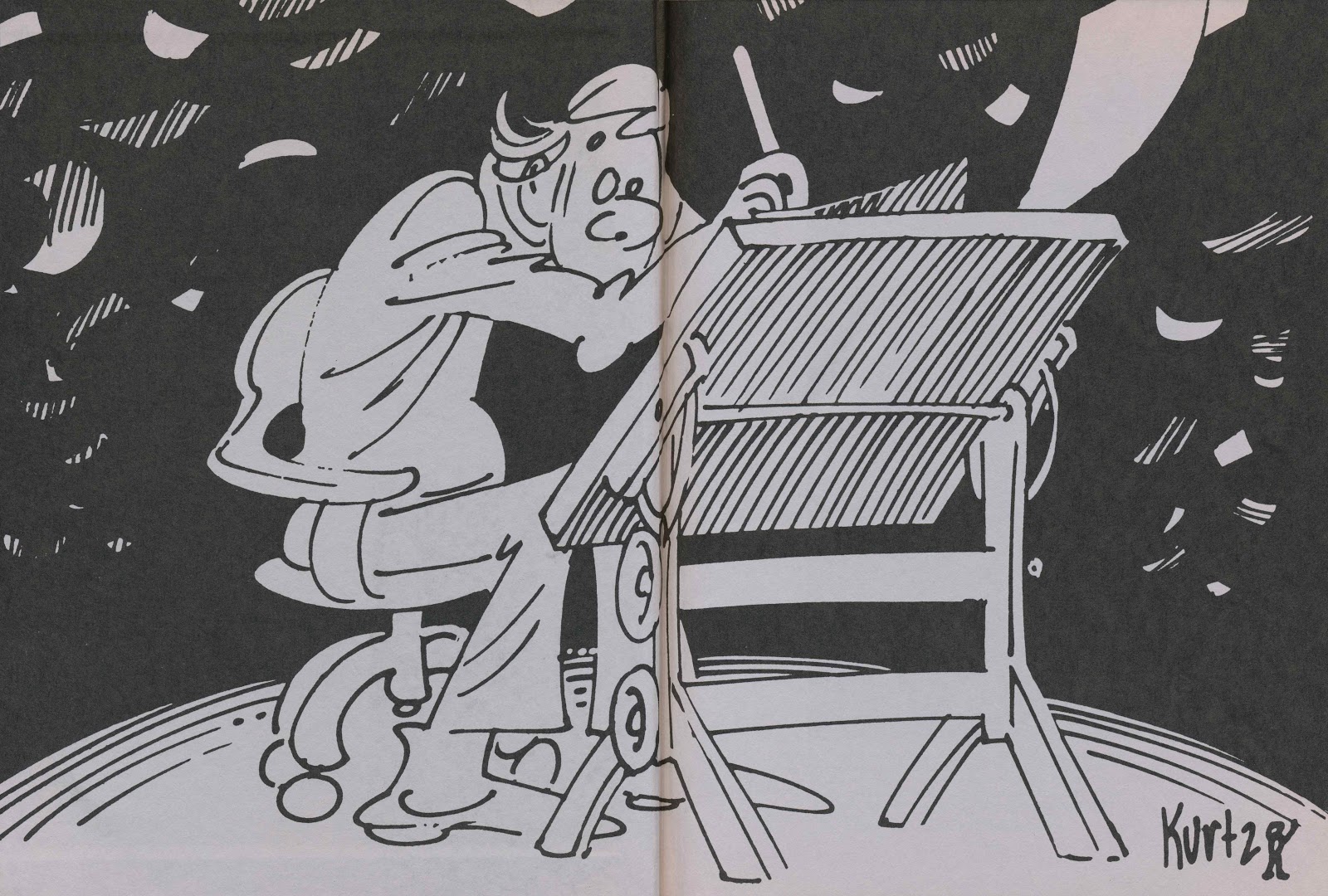 In my job envelope I still have the “Super Surfer” photocopies
of the photostats of Dave Gibbons pencils with Harvey’s notes. 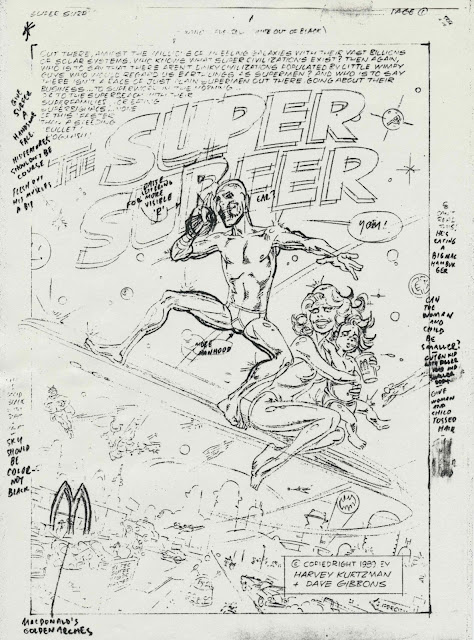 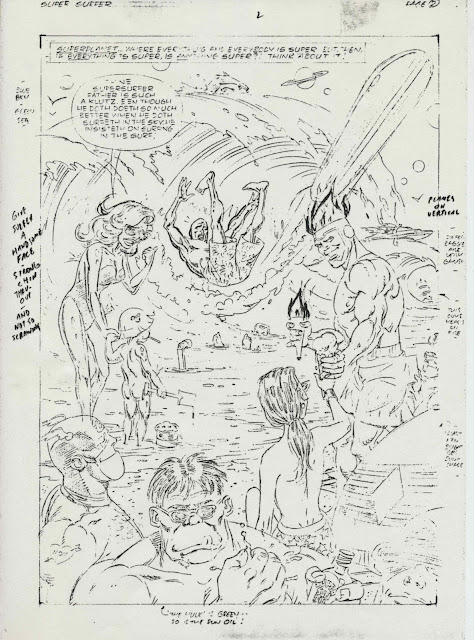 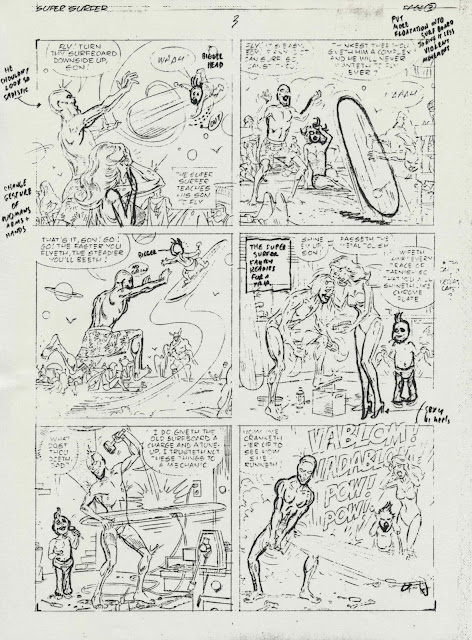 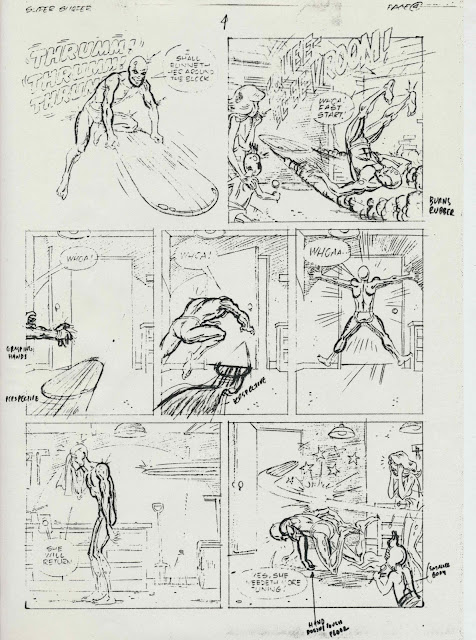 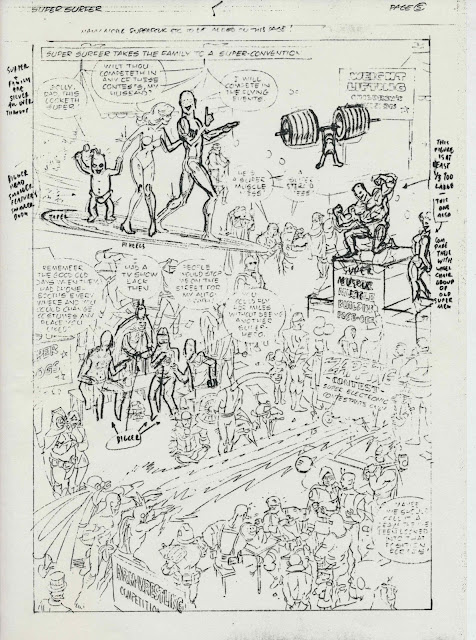 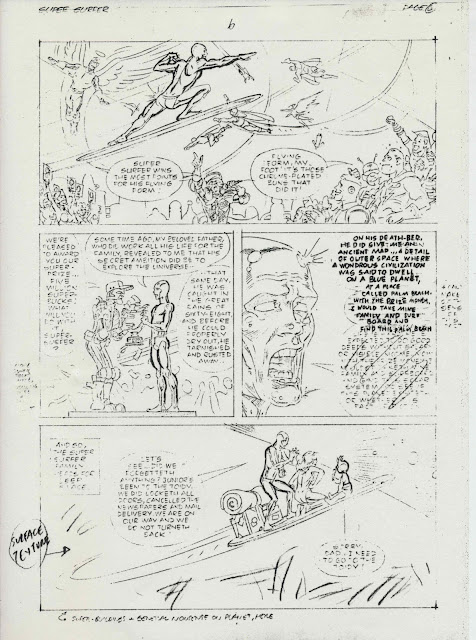 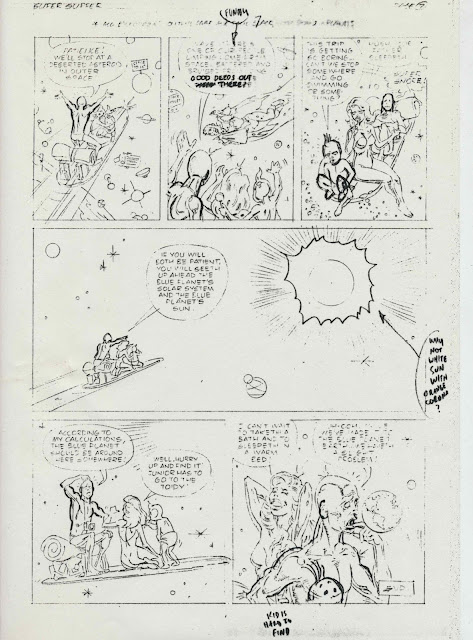 Photocopy of the first page of the unused story, “The Maltese Chicken”,
with art by Sarah Downs, involved several well-known detectives. 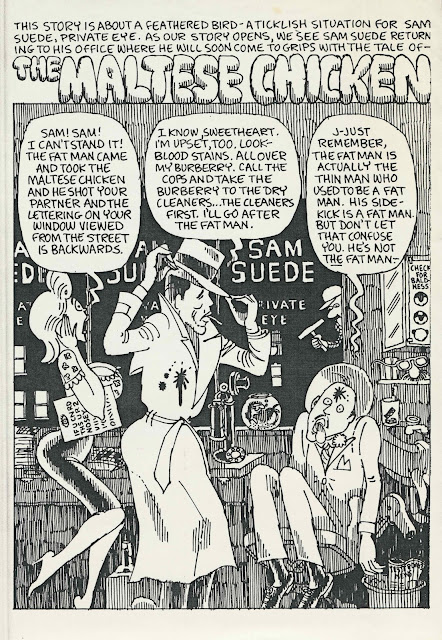 Another unpublished story was drawn by Alex Nino. Scripts were
sent to Jack Davis and Richard Corben but both were busy at the time. 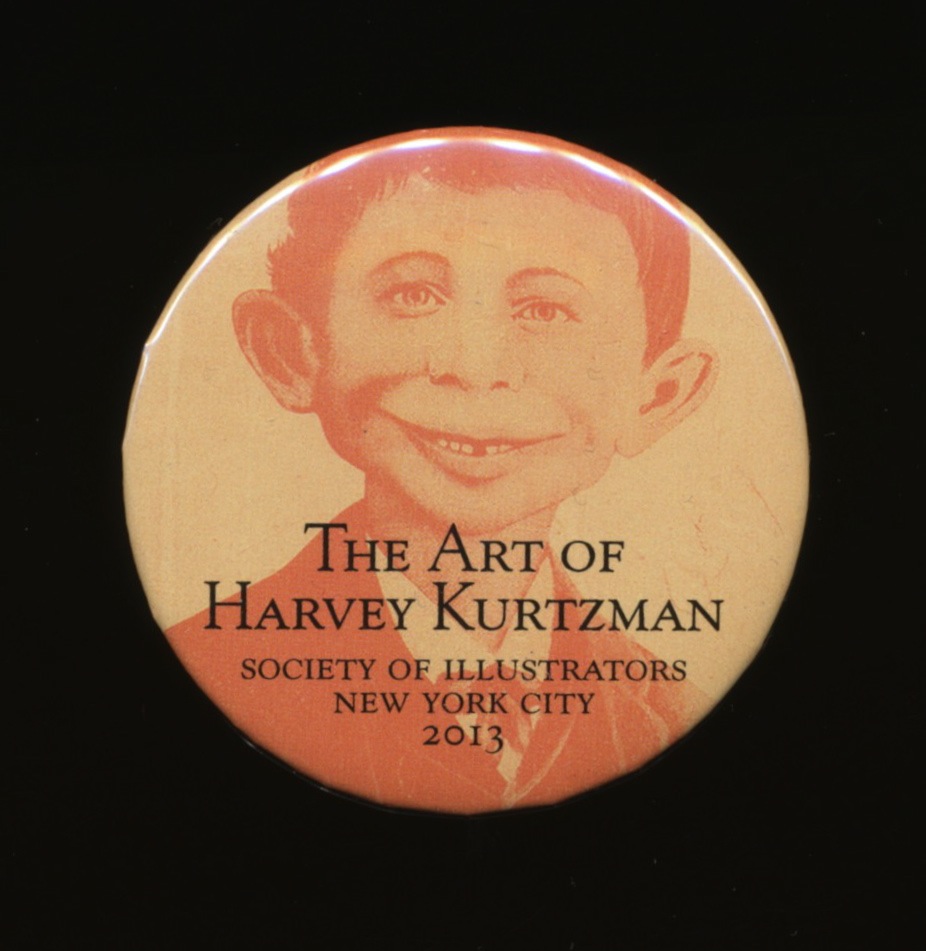