William Henry Cook was born in Jersey City, New Jersey, on October 8, 1888. Cook’s birth information was found at the New Jersey, Births and Christenings Index, at Ancestry.com, and recorded on Cook’s World War I and II draft cards. His parents were William H. Cook and Martha Seeley.

According the the 1905 New York state census, the Cook family resided at 165 Jefferson Avenue in Brooklyn. Cook worked as a stenographer.

The 1910 census said Cook was a stenographer at the theatrical office. His mother was the head of the household which was at 980 Jefferson Avenue in Brooklyn.

The Cooks remained in Brooklyn but at a different address, 1526 Pacific Street, as recorded in the 1915 New York state census.

Cook was married and had a child when he signed his World War I draft card on June 5, 1917. He resided at 40 Lembeck Avenue, Jersey City, New Jersey, and was a catalogue writer for the American Can Company, 120 Broadway, New York City. The description of him was medium height and build with brown eyes and hair. Cook’s death certificate said he served from March 14 to November 26, 1918.

Cook was living in Brooklyn, at 642 Classon Avenue, when the 1920 census was enumerated. His occupation was publicity clerk while his wife was a stenographer at a vaudeville house.

Cook sold stories to pulp magazines which appeared as early as 1923.


Fiction House. Inc.. publishers at 271 Madison Avenue, announced yesterday the purchase of Frontier Stories from Doubleday, Doran & Co., Inc., of Garden City, L. I. William Henry Cook will be the new managing editor of the magazine, which, beginning with the June issue, will be printed under the Fiction House imprint.

In the 1930 census, magazine author Cook and his family were in Ramsey, New Jersey at 101 Pine Street.

“12 ‘Pulp’ Magazine Stop Publication” was the headline of the December 12, 1932, New York Times article. The subhead read: “Fiction House Suspends All Its Journals Until Competitive Situation ‘Rights Itself’”

New Fun Magazine for Juveniles Out

New Fun is the title of a juvenile magazine that appeared for the first time today on the newsstands of the principal cities throughout the United States, according to an announcement made by Malcolm Wheeler-Nicholson, president of National Allied Publications, Inc., 49 W. 45th St.

The book, Of Comics and Men: A Cultural History of American Comic Books (2010) said:


It did not take long before Wheeler-Nicholson had to face direct competition. As the Major was terrible at managing his business and paying his employees, business director John F. Mahon and editor William H. Cook quickly quit to found Comics Magazine Company, whose first title The Comics Magazine appeared in January 1936. Renamed Funny Pages with its second issue, it proved an all-the-more serious competitor to Wheeler-Nicholson because Mahon and Cook had enticed several of “his” freelancers that were fed up with not being paid. 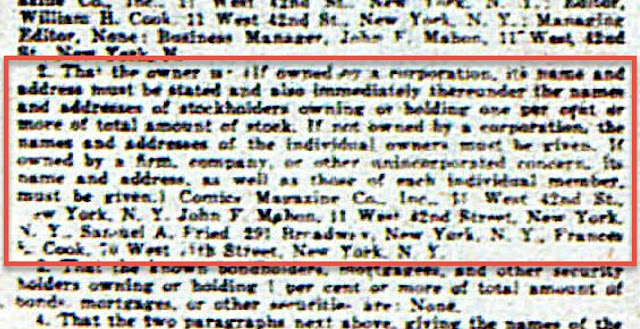 The Comics Magazine Company’s last issues had the cover date June 1937. These issues appeared soon after this bankruptcy notice in the New York Times, February 6, 1937:

I. W. Ullman and Frank Z. Temerson’s Ultem Publications picked up the Comics Magazine Company’s titles Funny Pages and Funny Picture Stories, and bought Chesler Publications from Harry A. Chesler who stayed on as editor and packager. Ultem published its comics for five months then sold them to Centaur Publications.

Cook continued contributing stories to pulp magazines. His occupation was freelance writer in the 1940 census which said he completed four years of high school. Cook and Frances lived at 215 West 14th Street in Manhattan.

On April 26, 1942, unemployed Cook signed his World War II draft card. He and his wife lived in Sheffield, Massachusetts.

(Next post on Monday: Robert J. Wildhack)
Posted by Alex Jay at 8:00 AM