Anatomy of a Logo: Superman


Superman appeared in the first issue of Action Comics which had a cover date of June 1938. A year later, Superman had his own self-titled comic book. 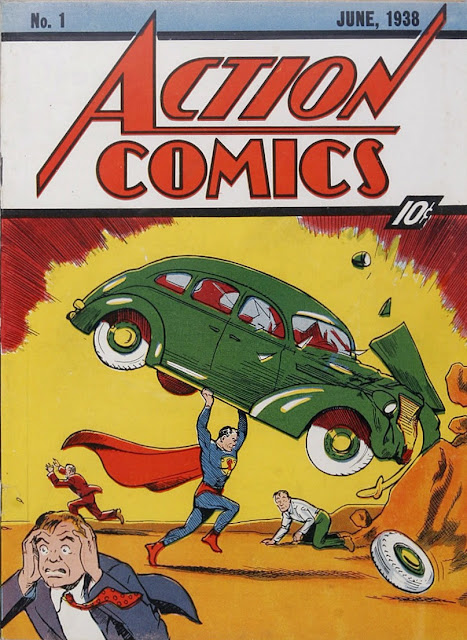 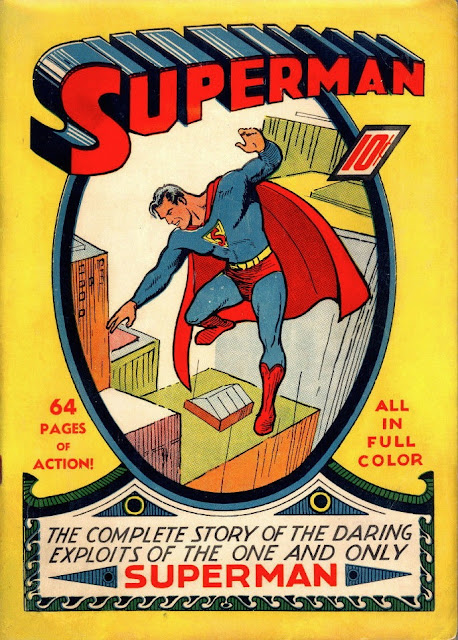 Superman was the creation of two teenagers, Jerome “Jerry” Siegel and Joseph “Joe” Shuster. At the time, they were students at Glenville High School in Cleveland, Ohio.

The Cleveland Public Library has an incomplete collection of the school’s Glenville Torch newspapers and Olympiad yearbooks in its Digital Gallery. The earliest mention of Siegel and Shuster was in the February 19, 1931 issue of the Glenville Torch. A front page article covers the new semester’s enrollment of sophomore students which included Shuster (see bottom right-hand corner of cropped article). 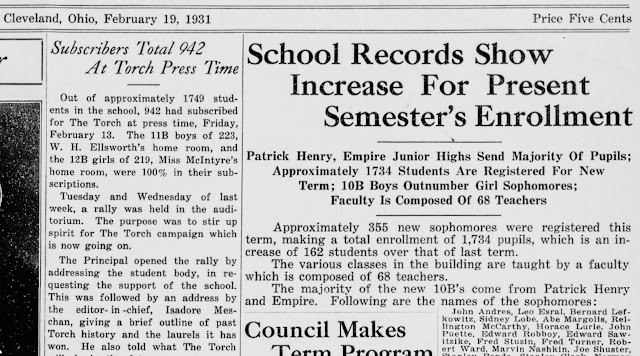 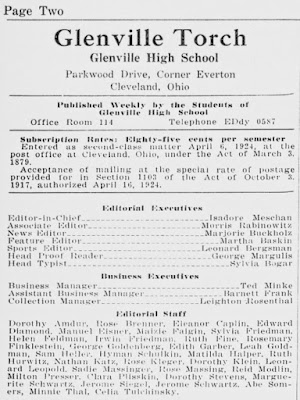 It’s not known if Shuster was in the school’s Art Club. Below are the Art Club pages from the 1931 and 1932 Olympiad yearbooks (1933 and 1934 are not available). The art teachers were Tina G. Bernstein, Florence R. Bush and Dorothy Taylor. In the photographs are movie posters by some of the students. The letterforms are sans serif and some posters have names or titles on an arc. These posters reflected the graphics of the time.


Shuster also did some writing. The May 12, 1932 issue of the Torch published this piece. 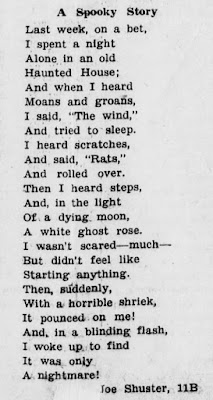 If Shuster had not gone into comics, he may have had a future in theater. He and Bernard Schmittke were mentioned in the October 6, 1932 Torch. 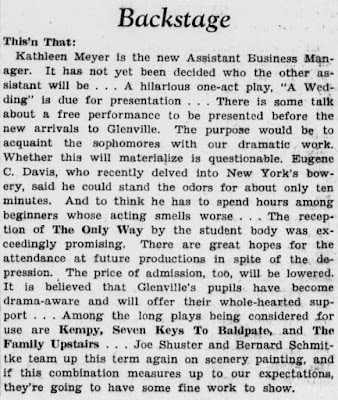 That same issue had an historically important article about Siegel and his magazine, Science Fiction, The Advance Guard of Future Civilization. The article article said Shuster and Schmittke were among the illustrators contributing to the mimeographed magazine. The article mentioned advertisements for the magazine. The September 1932 Amazing Stories carried an advertisement for Science Fiction. (Thanks to Clint Ciroula for the image link.)

The October 1932 Amazing Stories carried an advertisement, on page 671, for Science Fiction Digest but it’s not clear if this was Siegel’s magazine. 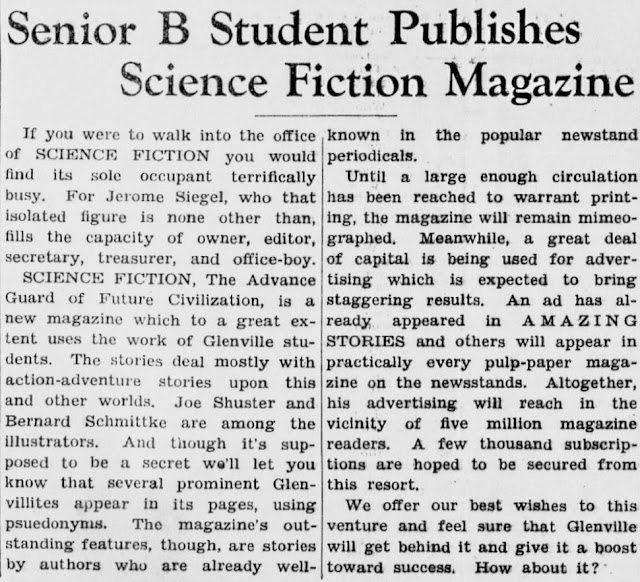 The Torch reported Shuster’s poster contest achievement on November 17 and 24, 1932. 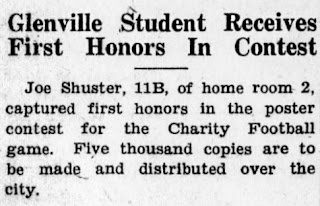 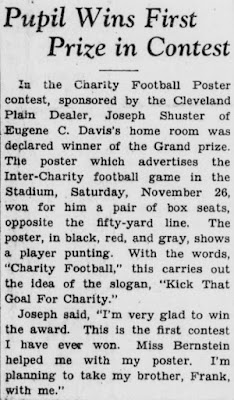 Throughout 1933, Shuster continued his artistic endeavors in stage craft.


For Thanksgiving, Shuster contributed this cartoon to the Torch, November 29, 1933.

The next issue of the Torch, December 7, 1933, explained how Shuster’s cartoon was chosen. The last paragraph may be a reference to the Superman comic strip. 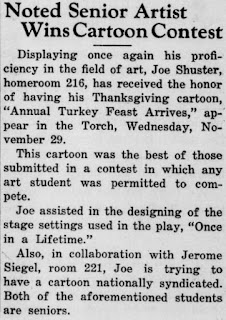 The Torch, March 15, 1934, mentioned Shuster and others for their scenery work. Apparently Siegel and Shuster graduated in the Spring semester of 1934. They continued to pursue their dream of getting published.

Siegel and Shuster were familiar with science fiction pulp magazines. Amazing Stories debuted with a cover date April 1926. It was followed by Astounding Stories of Super-Science dated January 1930. 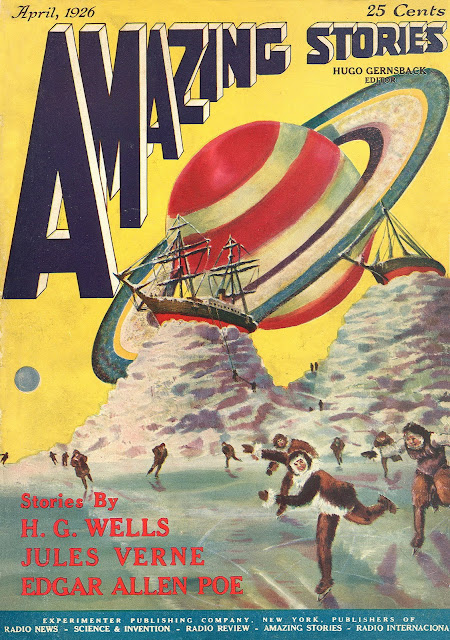 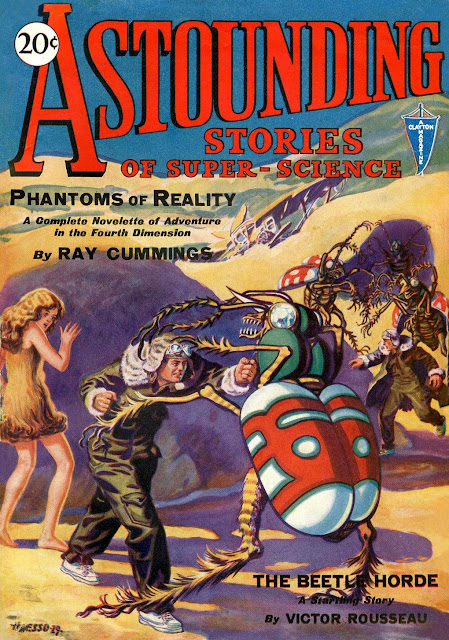 The logos of these magazines influenced, to some degree, the Superman logo that Shuster designed.

The third issue of Siegel’s Science Fiction, dated January 1933, featured the villain, Superman, in “The Reign of the Superman”, by Herbert S. Fine, one of Siegel’s pen names. The story was illustrated by Shuster. 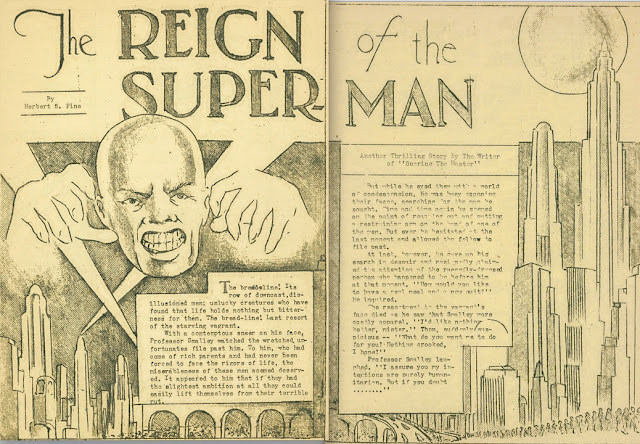 Later that year, the character was changed into a hero. Below is a detail of Shuster’s pencil sketch of the heroic Superman. 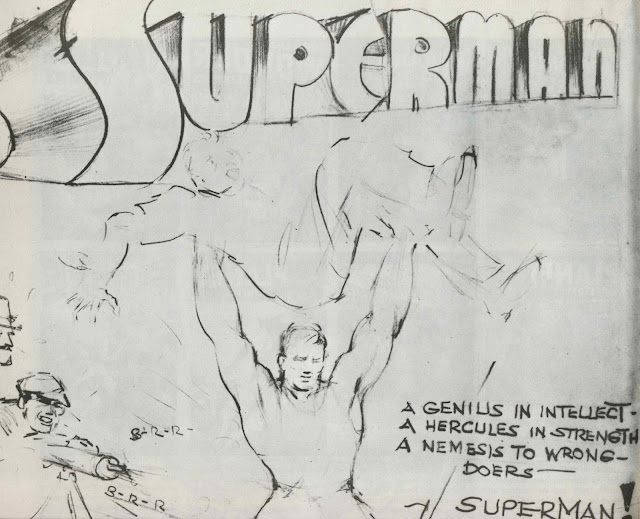 Siegel and Shuster produced a comic book called The Superman. The cover has a 1933 copyright notice in the lower left-hand corner. The comic book was not published. 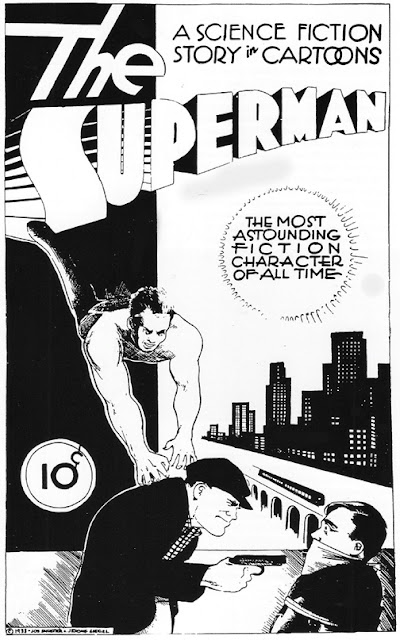 Shuster’s logos are at eye-level in two point perspective. The pencilled version has the large initial S followed by letters on a straight line. The letters have telescoping shadows with shading.

On January 28, 1933, the Jimmy Cagney movie, Hard to Handle, was released. The movie poster has two letters, S and E, that are similar to those in Shuster’s pencil sketch. Maybe Shuster saw this poster or something with those letters. 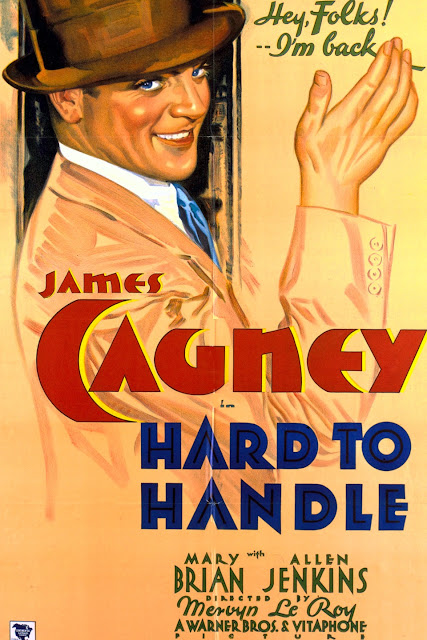 For the comic book, The Superman, Shuster designed the logo on a slight arc. The S is on the same baseline as the other letters which have all changed. On the telescoping shadows, Shuster used graduated lines for the shading on the first three letters. 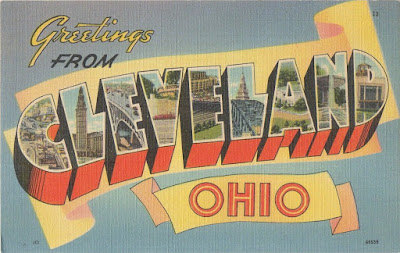 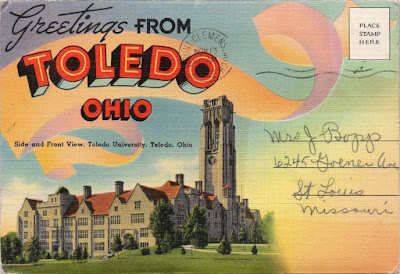 Comparing the 1933 The Superman logo to the 1939 Superman logo, there are major changes. The point of view has changed from eye level to bird’s eye. The shapes of nearly all the letterforms have changed. The telescoping shadow is deeper. The name begins with an initial letter larger than the others. 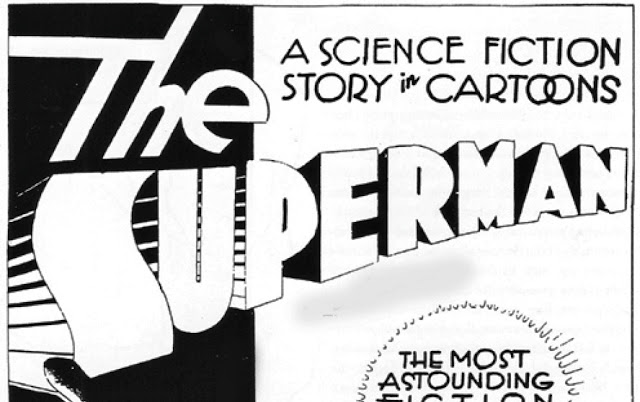 Did Shuster see something that made him change his logo design? Was there a “missing link” in the evolution of the Superman logo?

The movie, Flying Down to Rio, was released December 29, 1933. Advertisements for the movie appeared in the Cleveland Plain Dealer for four months, so there was plenty of time for Shuster to have seen the poster or lobby cards. The line, Down to Rio, has some characteristics of the 1939 Superman logo such as the bird’s eye view and letters N and R. The lobby card has a worm’s eye view. Could this be the “missing link”? 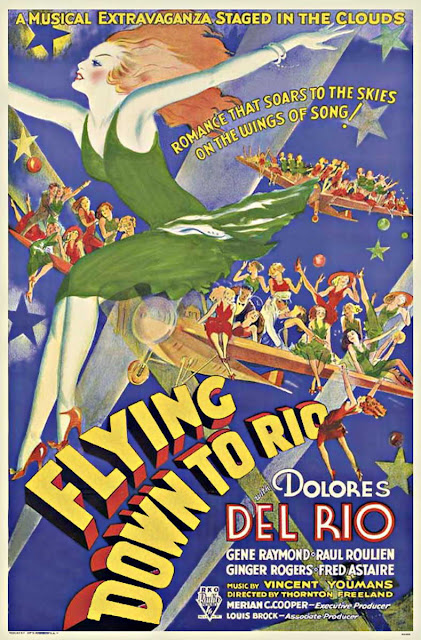 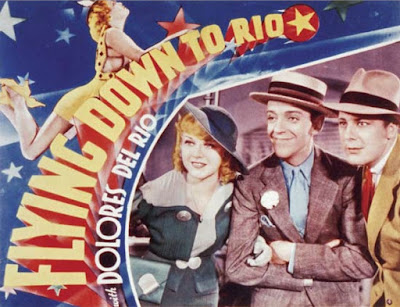 Perhaps the “missing link” was Buck Rogers who debuted in the August 1928 issue of Amazing Stories. 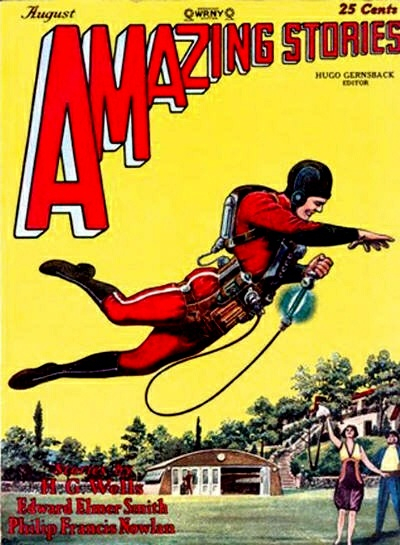 On January 7, 1929, the Buck Rogers in the 25th Century A.D. comic strip started. The Buck Rogers Sunday strip began March 30, 1930. The success of Buck Rogers spawned a slew of merchandise. A 1933 Buck Rogers radio premium was sponsored by the Kellogg Company. 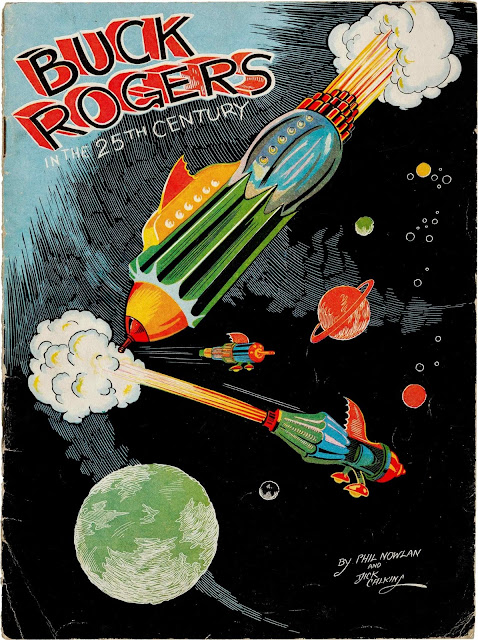 In 1934, the Daisy Manufacturing Company produced the Buck Rogers 25th Century Disintegrator Pistol. Below are two views of the original box. 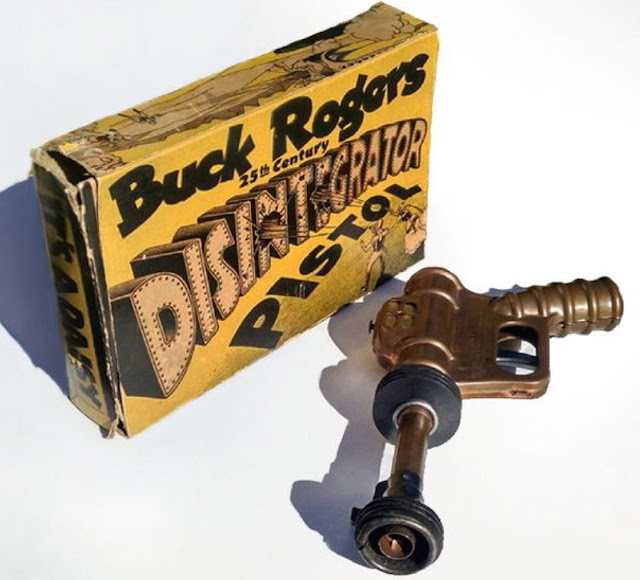 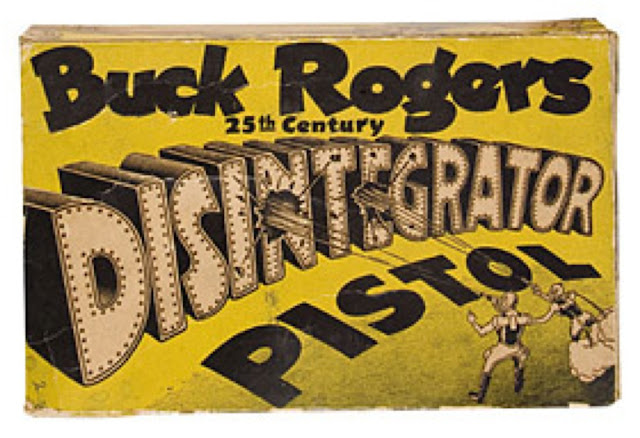 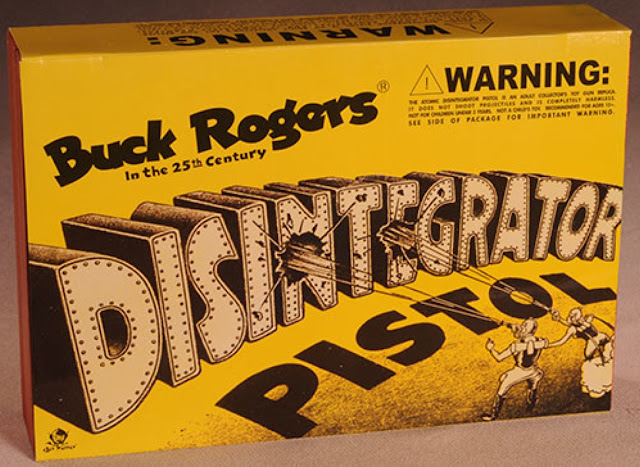 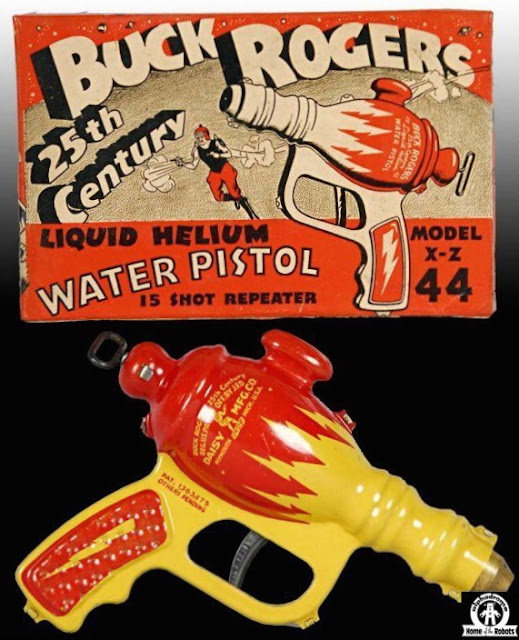 The Flash Gordon comic strip debuted January 7, 1934. The following year saw the release of the Big Little Book, Flash Gordon and the Tournaments of Mongo. In 1936, the character was adapted for the screen in a serial of thirteen chapters. Flash Gordon in the Water World of Mongo was published in 1937. Here is another “missing link” possibility.


Another 1937 Big Little Book was Popeye and the Jeep.

The Phantom comic strip started on February 17, 1936. Later that year, the strips were collected in a Big Little Book. The Sunday strip began May 28, 1939. The logo from the Sunday page would be a long-shot as a possible influence on Shuster’s logo since the Superman comic book had a cover date of Summer 1939.


Here are more examples, from the 1930s, of a bird’s eye view of telescoping lettering.


The 1930s had an abundance of graphics that may have influenced Shuster’s logo designs. The “missing link” could have been one of the above examples or from other sources such as lettering books, magazine advertisements, billboards, show cards, food labels, etc. Shuster saw something that helped him design the 1939 Superman logo.

The 1939 Superman logo letterforms changed on issues two through five. The logo was redrawn for each issue. On the sixth issue, Ira Schnapp’s Superman logo was used for forty-three years. 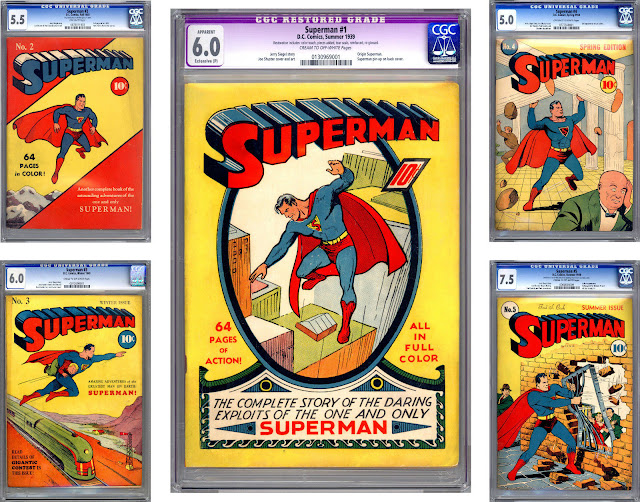 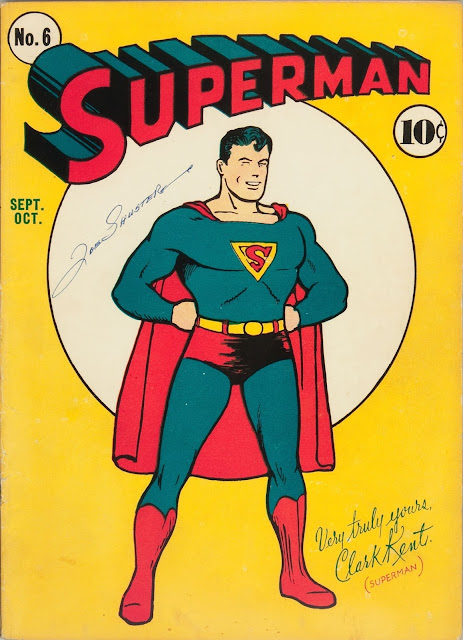 Dial B for Blog
The Visionary, Part 3 of 10
The Secret History of the Super Logo!

The Encyclopedia of Cleveland History
Superman


(Next post on Monday: Gordon & George, Speedball Pen Inventors)
Posted by Alex Jay at 8:00 AM