Lettering: Modern and Foreign was the second book by Samuel Welo. His first book was The Studio Handbook (1927), and the third was Trade Mark and Monogram Suggestions (1937). I did not find any biographical information on him in a Google search. So I turned to the genealogy web sites Ancestry.com and GenealogyBank.com.

Starting with Ancestry.com I searched for “Samuel Welo” and found a “Sammie Welo” but he was a carpenter, according to his World War I draft card. The United States Federal censuses did not record a “Samuel Welo” until 1940. I tried alternate spellings of Welo, such as Weelo. Wela, Wello, Wilo, Wila, etc. but I did not find him. (Sometimes the census enumerators misspelled names, and the data entry people at Ancestry.com have to transcribe, sometimes, hard-to-read handwriting.) Then I began to suspect that “Samuel” was not Welo’s first name, so, I changed the first name search to the letter “S” and looked for “S Welo” in the censuses. I got 108,195 hits.

Well, you have to start somewhere. The first name on the list was “Anna S. Welo”, so I skipped to the second name "George S. Welo" and clicked on the link to the 1930 census image (see detail, below). His name was on line 52; in the “Profession” column it read, “Commercial Artist”, and in the “Industry” column it read, “Studio”. I sensed I had found Samuel Welo.

I went back to the list and clicked on the link for “George S. Welo” in the 1920 census (see detail, below). His name was on line 21; in the “Profession” column it read, “Commercial Artist”, and in the “Industry” column it read, “Sign Painting”. Now I was certain I had found Samuel Welo.

I searched “George S. Welo” and found him in the 1900 and 1910 censuses and his World War I draft card. He was a Michigan native who lived in Kalamazoo.

At GenealogyBank.com I searched “George S. Welo” and got unusable results. I searched “Samuel Welo” and got hits for two of his books. Then I narrowed the search to Kalamazoo, Michigan newspapers and searched “Welo”. Of the 29 hits, three were about him and one was related. With this information I was able to write the following profile.


George Sherburne “Samuel” Welo was born on July 9, 1895 in Covert, Michigan, according to his World War I draft card. In the 1900 U.S. Federal Census, he was the only child of Andrew and Vena. They lived on Third Street in Winthrop Village in Alfsborg, Minnesota. His father, a salesman, was born in Norway, and his mother was a Wisconsin native. In the 1910 census, the family of three lived in Kalamazoo, Michigan at 924 Denner Street. The Kalamazoo Gazette reported, on December 28, 1913, the upcoming New Year's event at the Majestic Theater, and included a sentence about Welo (see top of the second column).

As one of the added features New Year’s eve,
Sam Welo, the well known local artist, will give
away specimens of his art studies to the audience.

Sometime during his early life he gained the nicknames “Sam” and “Samuel”. In the June 27, 1914 Gazette “Society” column was this item.

Mrs. Emiline D. Fair, of 940 Denner street, went to Covert, Mich.,
yesterday where she will be united in marriage to Mr. George A.
Sherburn [sic] at their future home. Mrs. Fair is aged 62 and Mr.
Sherburn is 72 years old. Accompanying the bride were her son,
Frank and daughter [sic], Mrs. Vena Welo.

The last sentence should have read, “Accompanying the bride were her son, Frank and the groom’s daughter, Mrs. Vena Welo.” Vena was the second child of George and Jennie Sherburne, according to the 1870 U.S. Federal Census.

The Kalamazoo County Genealogical Records includes “Selected Kalamazoo Directories”. A 1915 listing was found for Welo and his father (see detail, below). He may have been a student at a nearby college or at the Detroit School of Lettering. 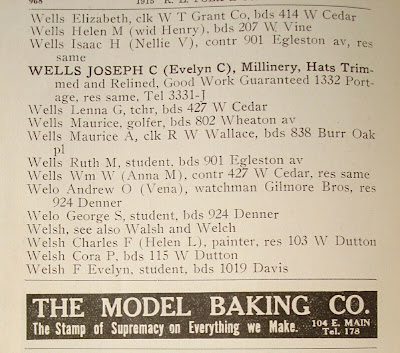 Welo was named after his maternal grandfather. On June 5, 1917, he signed his World War I draft card as “George Sherburne Welo”. The card showed his address as “1325 Alamo Avenue”, and his occupation as “Enamel Sign Brusher” at the “Michigan Enameling Works, Kalamazoo, Michigan”. (A bit of information about the company is here.) He was married and had one child. 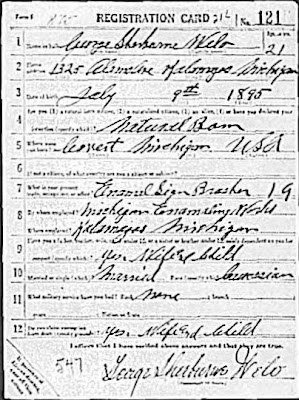 On the back of the card was a description of him, “tall, slender, with dark brown eyes and light brown hair”. The Gazette still referred to him as Sam and Samuel in the February 5, 1918 article, “Sam Welo Wins Auto Contest”.

To Samuel Welo, 1325 Alamo avenue,
fell first honors in The Gazette’s automobile
contest, which closed at noon today.
Welo was one of 47 contestants.

Welo’s contribution consisted of a booklet
containing pen drawings of all the
automobile dealers in Kalamazoo,
their trade marks and the names
and features of the cars offered for sale
by them. Welo’s effort was thorough,
neat and contained many clever ideas….

…The two winning first and second place
will be given a season pass each
while the remaining 20 will be given
two tickets each.

Baby Welo
Victor Platt Welo, aged one month,
son of Mr. and Mrs. George S. Welo,
1325 Alamo avenue, died at 8 o’clock
Sunday morning. A short prayer service
will be conducted at the home at 4 o’clock
this afternoon by Rev. Foster Fuller.
The body will be taken Tuesday morning
to Covert for burial.
[Covert is about 30 miles/48 kilometers
west of Kalamazoo.]

The 1920 census recorded Welo and his family in Benton Harbor, Michigan at 81 Ninth Street. His wife was named Lola and their daughter was named after his mother. He was a commercial artist in the sign painting business. In 1927 his book The Studio Handbook was published, and he used his nickname Samuel. The date of his move to Detroit, Michigan is not known.

In the 1930 census, the Welos lived in Detroit at 8525 Wisconsin. He worked in a commercial art studio, which was his studio. The same address appeared on page 59 of Lettering; he had an advertising art partnership, McMullen-Welo. And on page 69, he featured his own studio, “Samuel Welo Studios, 8525 Wisconsin Avenue, Detroit”. According to the census he married when he was 19 years old. His second book Lettering: Modern and Foreign was published in 1930. His parents passed away in Kalamazoo in 1935. (Their names can be viewed at the Kalamazoo County Government website. Enter “welo” in the bottom search box, “All Names or Type”.) Trade Mark and Monogram Suggestions was published in 1937.

The 1940 census recorded him at 8544 Cloverlawn Avenue in Detroit, where he was a commercial artist with a private business. The December 27, 1941 issue of Stamps noted the Krist-Port airport dedication in Farmington, Michigan, on October 12; the postmark was designed by Sam Welo. A World War II draft card for him has not been found; he may have passed away before the draft or he did not register or his card was lost. In 1946 Lettering: Modern and Foreign was reissued as Practical Lettering: Modern and Foreign. The Studio Handbook was revised and published as Studio Handbook Lettering in 1948; another edition appeared in 1960. It’s not known if he was involved with the revised editions. His wife passed away in Michigan in January 1966, according to the Social Security Death Index. What became of Welo is a mystery, but I believe there was an obituary in a Michigan newspaper.