Muppet-Vision 3D is located at Disney's Hollywood Studios in Orlando, Florida. The attraction opened on May 16, 1991. Movie poster parodies, featuring the Muppets, line the wall of the entrance waiting area. I did the title lettering for two posters.
TUESDAY, MAY 14, 1991
In the late afternoon, David Vogler, of David Kaestle Inc., calls and offers a rush lettering job for two Muppet movie posters, parodies of The Bride of Frankenstein and Follow the Fleet. The job is due in two days. I accept. He faxes layouts of the lettering and posters. (The faxes are missing from my file.) I begin work right away on the parody, Follow the Feet. About an hour later, I fax a tight comp of the lettering to David and he approves it. I leave the studio to see a performance by the Pan Asian Repertory Theatre.
WEDNESDAY, MAY 15, 1991
In the morning I begin lettering Follow the Feet. Most of the letters are straight lines, so the inking goes quickly. I use a compass to make the "O". 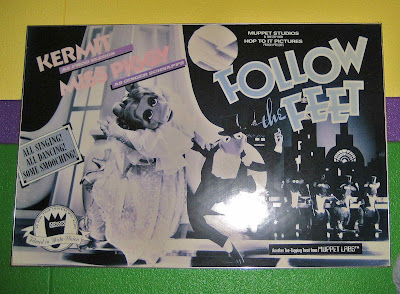 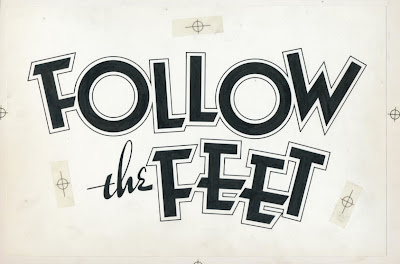 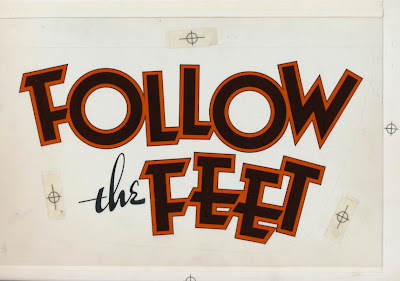 The Bride of Froggen-Schwein lettering is made using a watercolor brush, India ink and newsprint. Unfortunately, I do not have the original art to show. With the brush filled with ink, I write the words on newsprint, which is porous and creates rough-edged letters. I write alternate versions for some words and individual letters. For example, when I wrote Bride, the "R" and "D" may have been poorly made. In that case, I replace the letters with another version. Sometimes the space between letters needs to be adjusted, so I cut the letters apart.
When all the words have been finished and positioned properly, I make a positive photostat of the lettering; a positive photostat will produce a black image on a white background. I examine the photostat and remove any blemishes, then I enhance the brushstroke streaks where needed.
Next, I make a negative photostat of the corrected photostat. Now the letters are white on a black background. I use white gouache and begin painting around the words to create the outline and shadow. When that step is finished, I make a positive photostat of the lettering. The photostat is affixed to illustration board and then a flap is added. 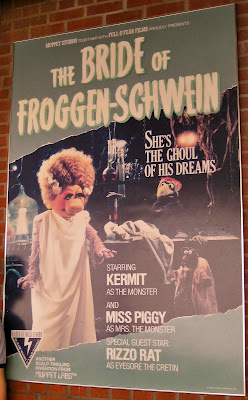 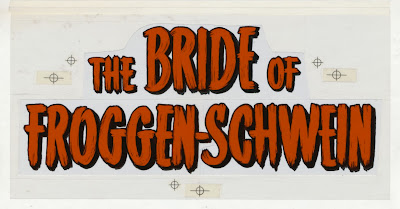 THURSDAY, MAY 16, 1991
I deliver the artwork in the early afternoon. David sends the artwork to a graphics facility to make color transfers of the lettering. The color transfer will be applied directly on a photograph; then the photograph will be photographed and printed in a large format.
Photos of my posters were taken in 2007. Some of the other Muppet movie posters can be viewed at Muppet Wiki.
(Next Monday: Anatomy of a Logo)
Posted by Alex Jay at 8:00 AM