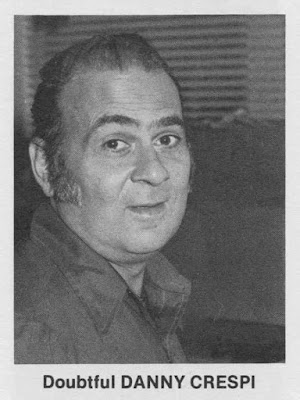 Daniel “Danny” Crespi was born on February 13, 1926, in Brooklyn, New York. His birthdate is from the Social Security Death Index and the birthplace is based on census records. Crespi’s parents were Turkish emigrants.


According to a passenger list at Ancestry.com, Crespi’s father, “J. Nessem Crespie”, a shoemaker, sailed on the steamship Floride from Havre, France on July 1, 1911 and arrived at the port of New York on July 11. In the column “Race or People” was written “Hebrew.” Another column asked for the name and address of the “nearest relative or friend in country whence alien came”. Nessem named his father, Daniel, who lived in “Angora, Turkey”. Today the city is known as Ankara. Nessem’s passage was paid by his brother, “Jacques D. Crespie”, the oldest of five siblings, who resided at 1196 Second Avenue in Manhattan. Both brothers made minor changes to their names.

On June 5, 1917 Crespi’s father, Nissim Crespi, and uncle, Jacob Crespi, signed their World War I draft cards. Nissim was employed at a paper box manufacturer. Jacob, later known as Jack, was a porter at the Colonial Hotel. They resided in Manhattan at 75 East 110 Street. (A family tree at Ancestry.com said Jack had a son named Daniel, 1918–2015).

Nissim has not yet been found in the 1920 U.S. Federal Census.

According to Crespi’s Social Security application, his mother was Sarah Asher. Crespi’s parents obtained a marriage license in Manhattan on September 30, 1920. They married in Brooklyn on October 4, 1920 according to the New York, New York, Marriage Certificate Index at Ancestry.com. At some point Nissim adopted the name Sam.

The same address was in the 1930 census. The household included Crespi, his parents and sister. Crespi’s father owned a shoe repair store.

On August 4, 1928, Crespi’s father filed an naturalization application. His Petition for Citizenship was approved June 28, 1932 in the U.S. District Court of the Eastern District of New York at Brooklyn. At the time, the Crespi family resided at 668 Georgia Avenue.

“A Journey Through Time”: Portraits of the American Jewish Family and the American Sephardic Jewish Family (1993) published the wedding photograph of Mary Asher and Israel Elias, who married on june 18, 1932. Young Crespi and his parents are in the picture.

According to the 1940 census, the family moved to the Bronx after 1935. The Crespi family’s address was 447 Claremont Parkway. That address was also on Crespi’s father’s World War II draft card which was signed on April 27, 1942.

Crespi’s art training was at Burne Hogarth’s Cartoonists and Illustrators School. (I contacted Todd Klein, who contacted Nel Yomtov, a relative of Crespi, who said Crespi used the G.I. Bill to enroll in 1946 or 1947.)

Who’s Who of American Comic Books 1928–1999 said Crespi’s comic book lettering career began at Timely Comics in 1948. In 1957, most of the Timely staff was disbanded. In Comics Interview #9, March 1984, D. Jon Zimmerman asked Crespie what he did next.

Danny: No, in advertising. I told myself, “To Hell with comics—it must be dying if a big company like Timely can close up.” I went to art studios doing board work and paste ups, then went to the presentation department of BBD&O and did Speedball lettering for them for 12 years.

In John Romita and All That Jazz! (2007), Jim Amash interviewed Romita and asked about Crespi. Romita said


Danny Crespi goes back even before I got there. He was working at the Empire State Building as one of the letterers during the Timely days. And then he wasn’t working with Stan for years, and all of a sudden he was back in the Bullpen again….

Who’s Who said Crespie returned to comics in 1969. However, in Comics Interview, Crespie said, “Well, about twelve years ago [1972] I called up Morrie Kuramoto—I don’t talk to him that often and once every twelve years is enough. (Laughter.) I didn’t even know if he was still working at Marvel, but I heard he was. I asked if he had any work for me. He said, “Hey, man, I can use a hand. Come on down!’”

The New York City, Marriage License Indexes, at Ancestry.com, said Crespi and Rosalyn R. Jaffe obtained a Bronx marriage license 1952. Their daughter, Susan, also worked for Marvel in the early 1990s and may still be there.

Crespi passed away May 30, 1985, according to his veteran’s file. The Social Security Death index said his last residence was the Bronx. Crespi’s father’s death was on September 3, 1992. His oral history was recorded March 13, 1991. Crespi’s mother died October 15, 2002. The death of Crespi’s wife was on October 14, 2013. All were laid to rest at New Montefiore Cemetery. 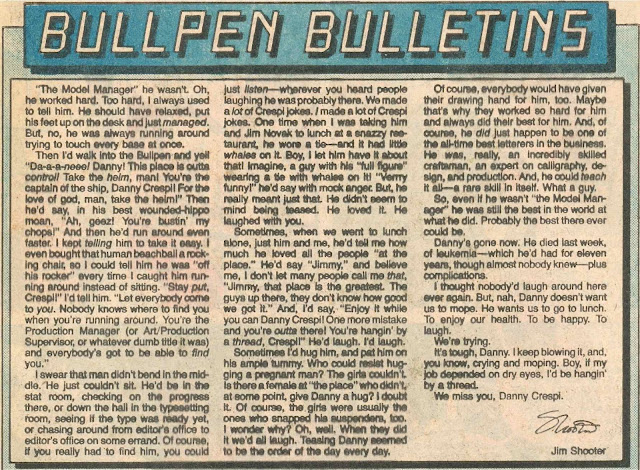 The Comics Journal #101, August 1985, said “Crespi came on staff at Marvel in 1972 as the head letterer, having been a freelance letterer since the 1950s. In 1978, he became the assistant production manager, working closely with John Verpoorten. When Verpoorten died, Crespi became the coordinator for the art and production departments. Since then, Crespi became the central figure responsible for day-to-day operations in the Bullpen.”

Scott Edelman
Marie Severin’s ’70s Marvel Bullpen map: “As for The Turk, I can’t say 100% for sure, but I believe that referred to then assistant production manager Danny Crespi….”
Cook Danny Crespi’s ribsClem Robins