Comics: Searching for George Herman and Finding Ray Herman, the Right One

George Herman was the twin brother of Ray who was a comics editor, writer, publisher and businesswoman. Both of them are in Who’s Who of American Comic Books 1928–1999. According to Who’s Who George did production work at Orbit Publications, and that’s all that was known. Ray, on the other hand, has a detailed profile, by Dave Saunders, at Field Guide to Wild American Pulp Artists. The profile is meticulously researched but there are a few errors.
Saunders said “Ruth Rae Herman” was born on June 9, 1920 in Brooklyn, New York, where she died on December 26, 1996. I assumed I would find George, with the same birth date, in the Social Security Death Index (SSDI) but he wasn’t there. So I searched for him in the New York, New York Birth Index at Ancestry.com. In the section for 1920 births in Brooklyn there was not a single person with the Herman or Hermann surname who was born on June 9. So who was the woman born on that date?
The SSDI has a Ruth Herman who was born on June 9, 1920 and died on December 26, 1996. Below are screenshots of her Social Security application and SSDI. 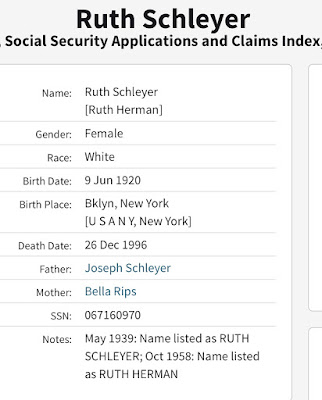 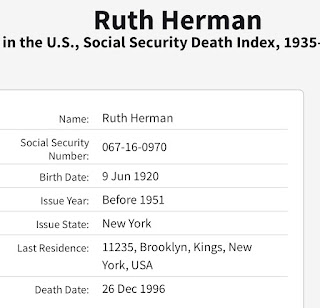 As you can see, Herman was the married name of Ruth Schleyer. Saunders used the birth and death dates of the wrong woman.
That brought me back to the New York, New York Birth Index which had two May 25, 1920, Brooklyn births for Joe and Ray Herman. Joe and Ray were not their full names.
The Social Security application for Ray Ruth Herman said she was born on May 25, 1920 in Brooklyn, and her parents were Harris (his middle name) and Fannie Herman. 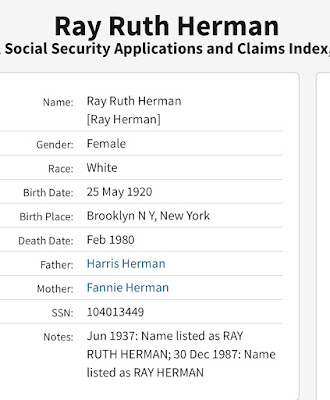 Saunders identified the Herman family in the 1925 New York state census: the parents were Aaron and Fannie, and their children, in birth order, were Abe, Beckie, Bennie, Sam, George and Ruth. The last two are Joe and Ray from the birth index. The address was 1474 Park Place in Brooklyn. The father’s full name, “Aron Harris Herman”, was on his World War I draft card.
Saunders said George and Ray graduated from high school in June 1939. In June 1938 George graduated from the Samuel J. Tilden High School in Brooklyn. The yearbook had his name as Joseph Herman who lived at 1474 Park Place (below). At this time it’s not known which high school Ray attended and when she graduated. (A note to researchers: In Ancestry.com’s collection of school yearbooks, The Rochellean 1941 yearbook was erroneously linked to Samuel J. Tilden High School in Brooklyn. That yearbook has a Ruth Herrmann, born in 1923, who graduated from New Rochelle High School and aspired to be a commercial artist.) 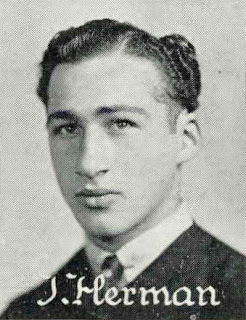 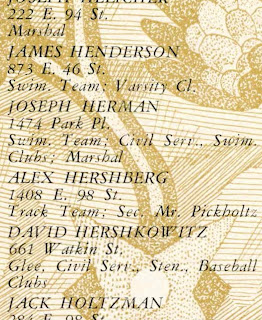 On July 1, 1941 Joseph George Herman signed his World War II draft card which had his May 25, 1920 birth date, Brooklyn birthplace, and mother’s name, Fanny. His address was 1474 Park Place, Brooklyn. 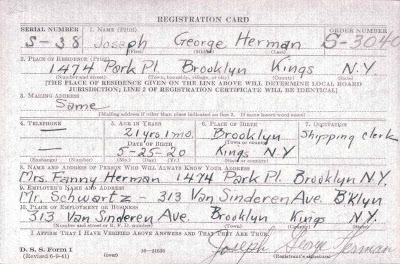 Saunders said the father’s death was on March 10, 1941. He gave no source for that. The New York, New York Extracted Death Index, at Ancestry.com, has a Harris Herman who was born around 1873 and died on December 17, 1947 in Brooklyn. The SSDI said Ray passed away in February 1980, in New York City. 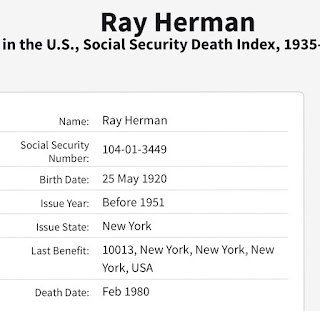 Ray was laid to rest next to her father at Mount Moriah Cemetery in Fairview, New Jersey. Find a Grave has a photograph (below) of their gravestones. Aaron Herman died on December 17, 1947, which is the same date in the New York, New York Extracted Death Index. Ray Herman was born on May 25, 1920 and died on February 25, 1980. She was about three months shy of her sixtieth birthday. 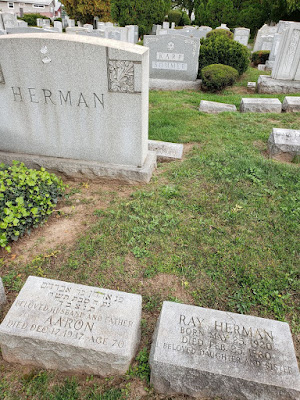 Ray’s oldest brother, Elliot Abraham Herman, was a real estate lawyer who died on July 13, 1984. It’s likely he made the funeral and burial arrangements for Ray. The Hartford Courant published his obituary and mentioned three surviving siblings, George, Ben and Betty, who all lived in Los Angeles, California. (Find a Grave has links to his “parents”, Harry and Fannie, but it’s incorrect. Their birth years make them too young to be the parents.)
According to the California Death Index, at Ancestry.com, the mother died on January 7, 1980 and George on June 10, 1985. Ben died on October 12, 1991. Betty died on November 1, 1995. She married Justin Antin in December 1932, according to records at Ancestry.com (below). Ray used her sister’s married name, B. Antin, in the second issue’s indicia of Toytown Comics. B. Antin was mentioned in Mark Carlson-Ghost’s “The Forgotten Super-Heroes of 1944–45” which was published in Alter Ego #164, May 2020, on page 44. In the same paragraph Mark said Ray’s brother, Samuel, was attributed as publisher of Taffy Comics #2, June 1945. Samuel died on June 23, 1977 in Fort Wayne, Indiana. 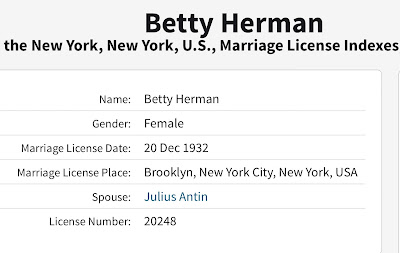 Further Reading and Viewing
Sometimes Ray spelled her name Rae. Many of her comic book credits are at the Grand Comics Database.
Alter Ego #117, June 2013 and #164, May 2020, published a photograph of L.B. Cole, Ray and Jack Grogan. In issue #164 Mark Carlson-Ghost wrote about the comic books published by Rural Home. Ray’s role was examined on pages 43 to 45.
Comic Book Marketplace #30, December 1995, published two photographs of Ray. On page 29 is L. B. Cole, Ray and Jack Grogan. On page 30 is the Continental staff with Ray seated on the right.
Women in the Comics
Trina Robbins and Catherine Yronwode
Eclipse Books, 1985
On page 66 Ray’s comic strip, Hep Cats, is mentioned and Ray being a publisher.
Mac Raboy: Master of the Comics
Roger Hill
TwoMorrows Publishing, 2019
Ray is mentioned on pages 41, 129, 130 and 131.
Mark Carlson-Ghost
Golden Age Holyoke Superheroes 1940–1948
Scroll down to The Hood where Ray/Rae Herman is mentioned as a recurring character in Cat-Man Comics numbers 23, 24, 25 and 26.
Pappy’s Golden Age Comics Blogzine
I did an earlier post on Rae Hermann with the incorrect birth and death dates.
(Next post on Monday: A Timely Move Begets a Timely Name)
Posted by Alex Jay at 8:00 AM