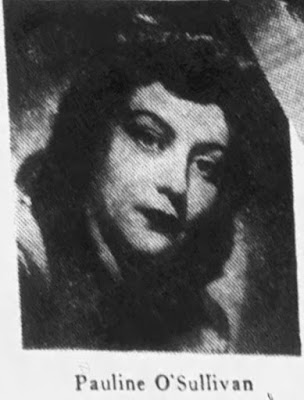 Pauline Loth was born around 1916 in either New York or Connecticut. There is no record of her in the New York, New York Birth Index at Ancestry.com. She was the youngest of two daughters born to Ernest Erich Loth, a German emigrant, and Fredrica Rasch, a Connecticut native. They married on October 25, 1913 in New Haven, Connecticut. Pauline’s sister, Dorothea Ernestine Loth, was born on June 26, 1914 in Manhattan, New York City.
The 1915 New York state census listed Dorothea and her mother in Manhattan at 301 West 150th Street.
On June 5, 1917, Pauline’s father signed his World War I draft card. He resided at 248 West 154th Street and worked at L.J. Higham Company, 4 West 48th Street in Manhattan.
Pauline was three-years-old in the 1920 U.S. Federal Census which said she was born in New York. The family lived in Manhattan at 248 West 154th Street. Pauline’s father was an engraver.
The 1925 New York state census recorded the Loth family in the Bronx at 1130 Woodycrest Avenue. The same address was in the 1930 census which had Pauline born in Connecticut.
On June 9, 1934, Dorothea and Alfonso A. Scibelli obtained a marriage license in Manhattan.
Pauline was known to have worked in animation at Fleischer Studios but it’s not clear when she started. Dorothea also worked there. Many Fleischer employees produced Christmas cards which can be viewed at Fleischer Studios Christmas Card Gallery. Of particular interest is card number 90, signed Dot Loth, in Gallery #5. 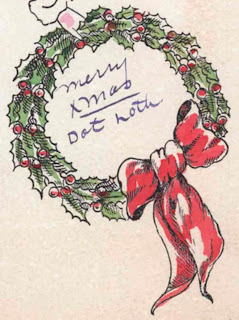 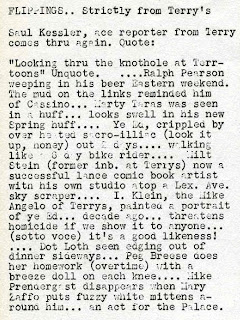 Detail
Apparently Dorothea started in the mid-1930s at Fleischer Studios. (The Social Security Act became law on August 14, 1935. The first batch of applications were mailed in late November 1936. Dorothea’s application, transcribed at Ancestry.com, was dated November 1936.) In late 1938 Fleischer Studios moved to Florida. It’s not clear if Dorothea moved to Florida. According to the 1940 census (below) she was an art painter at Terrytoons in New Rochelle. The census said Dorothea was single and living with her parents in the Bronx at 1523 Undercliff Avenue. (She should not be confused with Dorothea Paula Loth, a Brooklyn artist.) It’s not known how long Dorothea was at Terrytoons.

Pauline has not yet been found in the 1940 census but she was in Florida in 1939. On December 15, 1939 the Fleischer Studios held its first annual Flipper Club Dinner Dance. A booklet called Flipper was produced for the event. In the centerspread was the program which said “That Prim Little Prima Doughnut, Pauline Loth … Dynamite in Diapers”. On pages 28 and 29 was a sports article by Jack O’Sullivan; more about him in a few paragraphs.
Also working at Fleischer was Vince Fago who was interviewed by Jim Amash, in Alter Ego #11, November 2001, and said

... I worked in Detroit for about four years, and there were several Disney people there. Then Fleischer Studios hired us to come to New York. But then Fleischer Studios had a strike, so I didn’t start working for them until it was settled. After the strike they moved the entire operation to Florida. They moved everyone’s furniture and paid the train fare and hotel bills for a while. I ended up working for Fleischer for four years. ...

Vince met Pauline and said she was an assistant animator. It’s not clear if they met in New York or Florida. In the interview he did not mention Dorothea or Pauline’s husband.
The Florida County Marriage Record, at Ancestry.com, said Pauline and John D. O’Sullivan were married on May 29, 1940. The 1940 census, enumerated on April 3, recorded John as a lodger at 1976 N.W. 24th Court in Miami. He was an artist in the moving picture industry. In 1939 he earned $1,560. 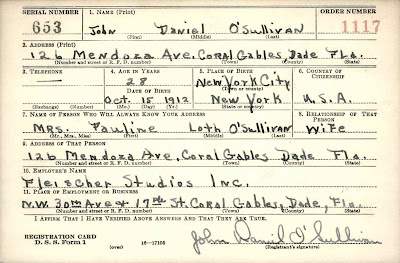 Pauline was the voice of Honey in the Fleischer feature, “Mr. Bug Goes to Town”. Her selection was reported in the Baltimore Sun, March 30, 1941.

Search For “Honey” Voice Ends Right In Studio
Like the fabled quest for the Bluebird, the search for a girl with a voice like honey to play the feminine lead in Fleischer Studio’s new $1,000,000 feature length technicolor cartoon, “Mr. Bug Goes to Town,” ended successfully at the studio in Miami, Fla.
The girl with the perfect honey voice is Polly Loth, 24, who stands only 4 feet 10 inches high, and she is an artist at the film plant.
Miss Loth won the title of the girl with the perfect honey voice after competing with a score of would-be honey voices tested by the studio scouts both in New York and Miami. Only when studio executives admitted they were not satisfied with any of the voices tested and among those tested were several big-name players of stage, radio and screen did Miss Loth ask for an opportunity to contest for the role.
In “Mr. Bug Goes to Town,” Miss Loth will be the voice of Honey, the bee heroine of the technicolor production, who loves Hoppity, the grasshopper hero.

Variety, December 10, 1941, said “Pauline Loth is wishy-washy as Honey, the heroine.”
The 1941 Flipper was the last one. The program included “Three Quarts and a Half Pint — Arnold Gillespie, Graham Place, Lloyd von Hayden and Pauline Loth”, and “The Flipper Glee Club” had the aforementioned plus Robert Schwartz, Dolly Selby, Edward Fortner and Woody Gelman.
In early 1942 Vince moved back to New York and found employment at Timely Comics. When Pauline returned to New York Vince hired her to work on Timely Comics material. He said “She did ‘Miss America’ for us and created her costume.” Pauline was also the fashion editor on the Miss America Magazine which used her married name, Pauline O’Sullivan, on the staff page. She made a number of public appearances. An advertisement in the Brooklyn Eagle, March 2, 1945, featured her at the Abraham & Straus “Fashion Show and Coke Party”.

The Brooklyn Eagle, April 25, 1945, noted Pauline’s upcoming talks on “Poise, Posture and Personality”, “Fashions for You,” “Building Today for Tomorrow,” and “Beauty.” According to the Nassau Daily Review-Star (Freeport, New York), April 16, 1946, Pauline was a judge in the second annual Teentimer “Design and Name It” contest.

In an interview with Michael J. Vassallo, Allen Bellman recalled Pauline. (Scroll down about two-thirds to the Miss America splash page) Timely-Atlas-Comics talked about Vince and identified many of the artists, including Pauline, who worked on Timely’s humor comics. Pauline’s name appeared on the inside front cover indicia of Terry-Toons #11, August 1943 and #12, September 1943.
“S’no Use and the Seven Dopes” has been attributed to Pauline. The story appeared in Coo Coo Comics #1, October 1942. In the last panel, lower left corner, there appeared to be the letters P and L. It’s difficult to read because of the coloring. When I drained the color the letter P is quite legible. Next to it looks like the letter L. 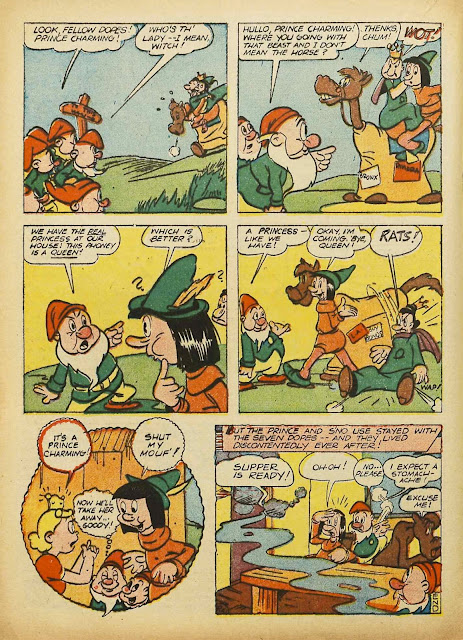 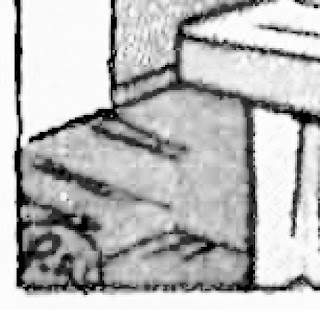 It’s not clear exactly where Pauline and her husband were living when they returned to New York. In the second half of the 1940s Pauline gave birth to Patricia Ann. The New York, New York Birth Index, at Ancestry.com, has four babies named Patricia O’Sullivan who were born in Manhattan; the dates are June 24, 1947, July 23, 1947, January 1, 1948 and January 21, 1948. Pauline stopped working to care for her daughter.
A death notice in the New York Post, May 5, 1948, noted the passing of Pauline’s mother.

Most of Pauline’s comics work was published in the 1940s. Her work surfaced in two stories in Zoo Funnies #7, July 1954, which was produced by Vince’s brother, Al Fago, and published by Charlton. “Shadow in ‘The Carpet Bagger’” was signed PO’S on page one, and “Shorty in ‘Sun Fun’” was signed P. O’Sullivan on the first panel. Pauline used her married name and initials on both stories. It’s not clear how many stories she produced in the 1950s.
The 1953 Manhattan, New York City Telephone Directory had a listing for a John D. O’Sullivan who might have been Pauline’s husband. Also listed was a Pauline O’Sullivan, at 228 East 40th Street, but it’s a different person. She was found in the 1940 census at the same address and O’Sullivan was her maiden name. 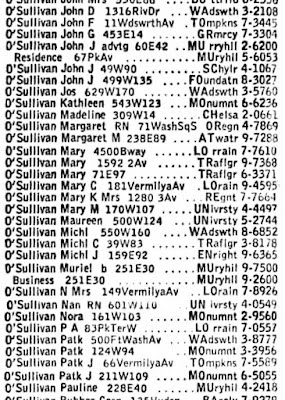 In the mid-1950s Pauline and her family moved to Stamford, Connecticut. The 1955 city directory said they resided at 970 Main Street. John was an editor at 1658 Summer Street which was the address of Fiction House magazine which also ceased publishing that same year. The 1956 and 1957 directories had the same home address and John was still an editor.
Pauline’s husband passed away on June 9, 1957. The New York Times published an obituary on June 15.

John D. O’Sullivan of Stamford, Conn., a magazine editor and former newspaper reporter, died Tuesday of a heart attack in the 125th Street station of the New York, New Haven and Hartford Railroad. His age was 45.
At his death, Mr. O’Sullivan was an associate editor of Confidential magazine. He was a story and gag man with Fleischer’s Studios from 1938 to 1942 and edited and wrote for Fiction House, Inc., magazine publishers, from 1942 to 1955.
Surviving, are his widow, Pauline A.; his father, D. J. O’Sullivan; a daughter, Patricia Ann, and four sisters.

The 1958 Stamford directory listed Pauline as a widow at 970 Main Street. The 1959 directory is not available. She was a commercial artist at the same address in the 1960 directory.

An obituary for Pauline has not yet been found. The Connecticut Death Index, at Ancestry.com, said she passed away in Stamford. 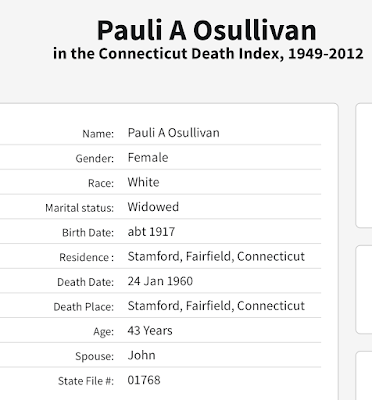 A death notice for Pauline’s father appeared in the Knickerbocker News, (Albany, New York), on July 21, 1961.

In the 1960s and 1970s Dorothea was a registered voter in Manhattan. According to the Social Security Death Index her last residence was Peekskill, New York. Dorothea passed away in June 1990. She and her mother were laid to rest at Ferncliff Cemetery.
Recommended Reading
Pretty In Ink: North American Women Cartoonists 1896–2013
Trina Robbins
Fantagraphics, 2013
The Great Women Superheroes
Trina Robbins
Kitchen Sink Press, 1996
Women and the Comics
Trina Robbins, Catherine Yronwode
Eclipse Books, 1985
(Next post on Monday: The 1929 Gopher Yearbook)
Posted by Alex Jay at 8:00 AM