Gerda Gattel was born Sara Gerda Hammerschlag, a German national, on October 28, 1908, in Lichtenstein, according to a family tree at Ancestry.com. During World War II she was in England. Her full name and birth information was recorded on the card, Female Enemy Alien—Exemption from Internment—Refugee, which had Gerda’s address as “18, Raglan Road, Edgbaston, Birmingham”. She had been a “Radio Kindergarten Teacher and Private Secretary” and was currently unemployed as domestic help. On October 13, 1939 Gerda was exempted from internment because of ”Nazi oppression”. 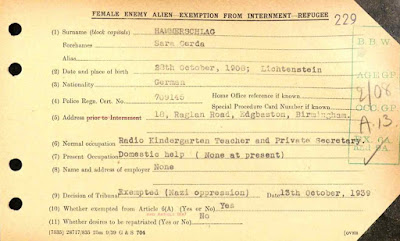 Gerhard was a German emigrant who arrived in New York City on September 22, 1938. According to the 1940 U.S. Federal Census, he resided with his uncle, Martin Gattel, in Brooklyn at 803 Beverly Road. Gerhard was a mechanic and had filed a naturalization application.

On October 16, 1940 Gerhard signed his World War II draft card which said he was born on January 18, 1912 in Chemnitz, Germany. He lived at 245 Ocean Parkway in Brooklyn. Gerhard enlisted in the army October 19, 1942, and became a naturalized citizen on June 17, 1943 in Louisville, Kentucky. At some point he was stationed in England where he met and married Gerda.

In April 1946 Gerda was set to join Gerhard in the United States. The British manifest said she was a British citizen and her U.K. address was ”Great Oaks, Goring Heath, Pangbourne, Nr. Reading, Berks.” She was the “Dependent of: T/5 Gerhard Gattel, ASN 32534331, US Army. 117 Midwood St., Brooklyn 25, New York.” Aboard the M.S. John Ericsson, Gerda arrived in New York City on April 29.

Who's Who of American Comic Books, 1928–1999 said Gerda was a letterer in the production department of Timely Comics (Marvel Comics) from 1947 to 1952. Information about her art training has not been found.

The 1948 Manhattan city directory listed the Gattel’s address as 86 Fort Washington Avenue and it was the same in 1960.

On February 7, 1949, Gerda became a naturalized citizen according to a document at Ancestry.com.


Jaffee: What about Gerda Gattel?

Jim Amash: I don’t know much about her, except she was in production, and after Timely let everyone go in 1957, she went over to DC Comics and had a long career there.

I was very friendly with Gerda. She had survived the Holocaust. She was one of the children who was lucky enough to be accepted by Great Britain during the Kinder Transport of Jewish children over to London, right before they stopped it. She wound up in London and was a little bit older than us, so she regaled us with stories about being in London during the Blitz. Then she came over here. I don’t know of any other way to say this, but she was a hunchback, but still a very attractive woman. She was a very good letterer.


Jim Amash: There was another lady there named Gerta [sic] Gattel.

Al Sulman: Gerta [sic] was on staff. She kept records of who was drawing what, and when it had to be finished... when it was time for publication. We knew when an issue had to be printed, and she kept track of who was drawing what, and made sure that they finished on time. She was an immigrant from Germany and spoke with a German accent. She was not a young woman, but she was a nice person.

Who's Who said Gerda was also a proofreader and production manager at Timely before moving to National Periodical Publications (DC Comics) in 1958. At National she was Irwin Donenfeld’s assistant from 1958 to 1968 and became production coordinator in 1968. Gerda was responsible for archiving the company’s publications.


In addition to Woodchucking, Uslan made time to become friendly with many of the DC staff. One in particular was Gerda Gattel. “She was one of the nicest ladies I’ve ever met in my life,” Uslan recalled. “I would talk to her about the old days at DC. At the time she was in charge of DC’s library. She knew how interested I was in comic book history. Most days around lunchtime Gerda would let me go into the library, and she would pull down volumes of books for me. Ultimately, over my summers with DC, I wound up reading every comic book they had ever published. I also had a chance to talk to Ira Schnapp, who had designed virtually every DC logo. He had refined Joe Shuster’s logo for ‘Superman.’ Amazing people … it was a phenomenal time to be there.”

The June 1973 Academy of Comic Books Arts Newsletter published a photograph of Neal Adams and Gerda who presented the 1972 Best Letterer Award to John Costanza. Below are details of pages two, four and five. 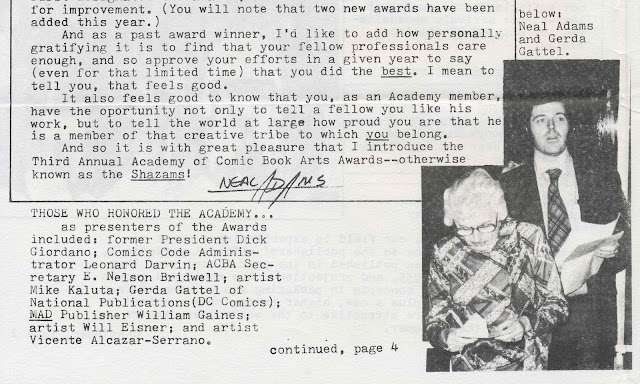 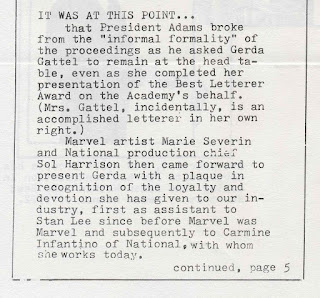 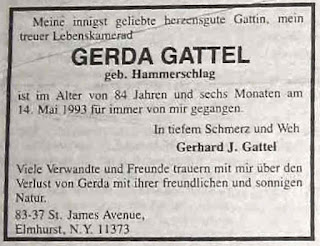 Further Reading
Paul Levitz: A Moment In The DC Library