Frank Frazetta was born on February 9, 1928. Part one of Armand Eisen’s interview with Frazetta was published in Ariel magazine, Autumn 1976. When asked the question, Was there any single art teacher whom you particularly admired or became close to or who influenced you?, Frazetta answered:

There was one outstanding man who really, really gave me incentive. He seemed to know how to get to me. Others had just the opposite approach. They felt, keep him down so he will fight and strive for better things. Right? His attitude was, tell him he’s great—in other words, make him happy and he will perform. And that really worked with me, in art. And you get those who try to push you down, and you come up just to show them—and they say “He’s great!” You are trying to show both sides that you are great. Whether it is in sports or in art, you’ve got to convince the non-believers and confirm the believers. That sort of thing. It is a marvelous feeling. That is what life is all about.

...By the way, what was the name of that art teacher?

Where did he teach?

And how old were you when he was your teacher?

Do you think that had any influence at all on your work?

Well, no influence on my work, none whatsoever. It was simply that I was going my way no matter who came along and he simply made my life more pleasant and just reaffirmed what was in my own heart, that I was good. I had it.

A copy of Frazetta’s high school transcript is here.

Paul Grubman was born in Brooklyn, New York on August 11, 1898, according to the Social Security Death Index. In the 1900 U.S. Federal Census, he was the youngest of eight children born to Joseph and Flora, both Russian emigrants. They lived in Brooklyn at 24 Osborn. His father was a machinist.

In the 1910 census, Grubman, his parents and three siblings lived in Brooklyn at 1623 Eastern Parkway. His father was an optician. He graduated from Manual Training High School on June 28, 1917, as reported in the Brooklyn Daily Eagle on June 29. He signed his World War I draft card on September 10, 1918. He lived at 1672 Union Street in Brooklyn and worked as a machine helper.

Grubman has not been found in the 1920 census. The Eagle reported, on September 26, 1922, that he was licensed to teach textile design at the evening high schools. He lived in Belle Harbor, Long Island at 238 North 132 Street.

He has not been found in the 1930 census. In July 1933 he was licensed to teach freehand drawing in high school, according to the Eagle, July 1, 1933. On November 27, 1934, the Eagle reported his appointment to Abraham Lincoln High School; he had been a substitute teacher. 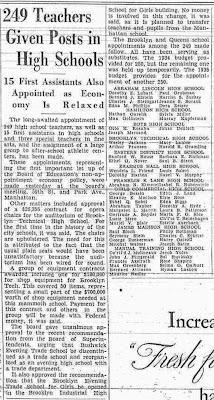 Grubman passed away in May 1984 in Brooklyn, according to the Social Security Death Index. He was buried on June 4 in Green-Wood Cemetery.