“…Scant information exists on Hussey and no examples of her work are known. She was a member and participant in the first exhibition in 1898 of the Chicago Arts and Crafts Society…The catalogue for the inaugural exhibition of the National Arts Club in New York City states that Hussey contributed a cast and chased silver belt buckle and cast and chased silver garter clasps with and without jewels….”
—Barry Shifman, The Arts & Crafts Metalwork of Janet Payne Bowles (1993)

1880 U.S. Federal Census
June 5, 1880
Hussey was the oldest of two children born to William and Persis.
They resided in Hollidaysburgh, Pennsylvania at 81 Walnut Street.

Hussey was a student at the Art Institute of Chicago. 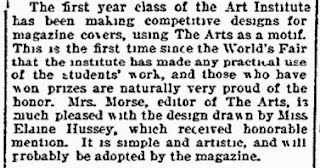 Chicago Arts and Crafts Society
1898
The Art Institute of Chicago 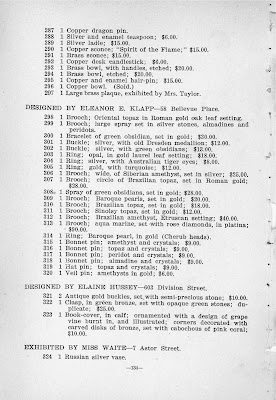 “...Some designs in metal work by Miss Elaine Hussey
were strong and beautiful in color.”

The Hussey household was counted twice. On June 4 they resided in Center Township in Indianapolis, Indiana, at 30 West Drive. Hussey’s birth was recorded as March 1874. The following day their address was 205 North New Jersey, and Hussey’s birth was May 1874. In the census category of “Occupation, Trade or Profession”, it was blank for Hussey.

Hussey put aside the arts and crafts when she married Alfred Stead in 1901. 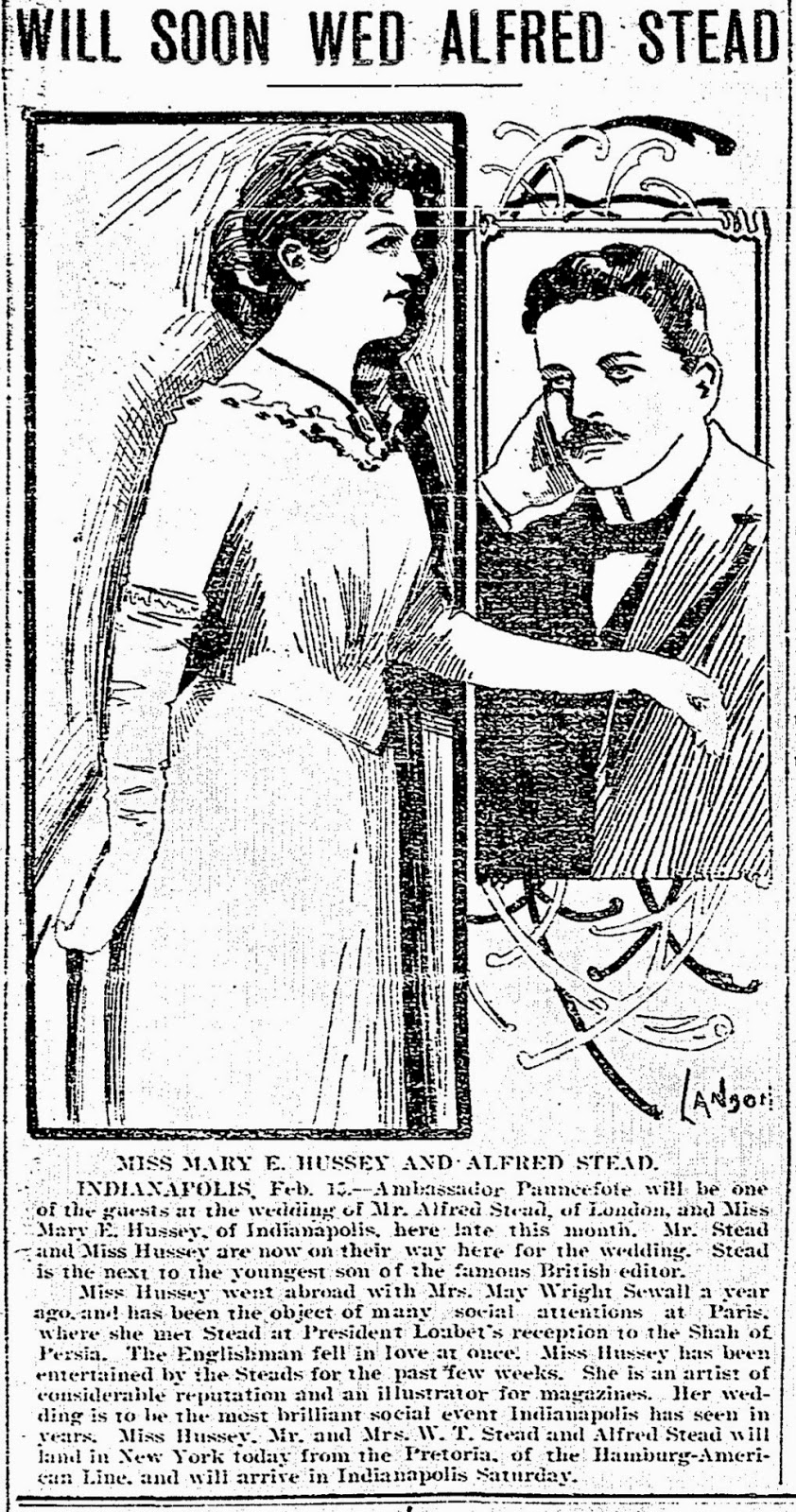 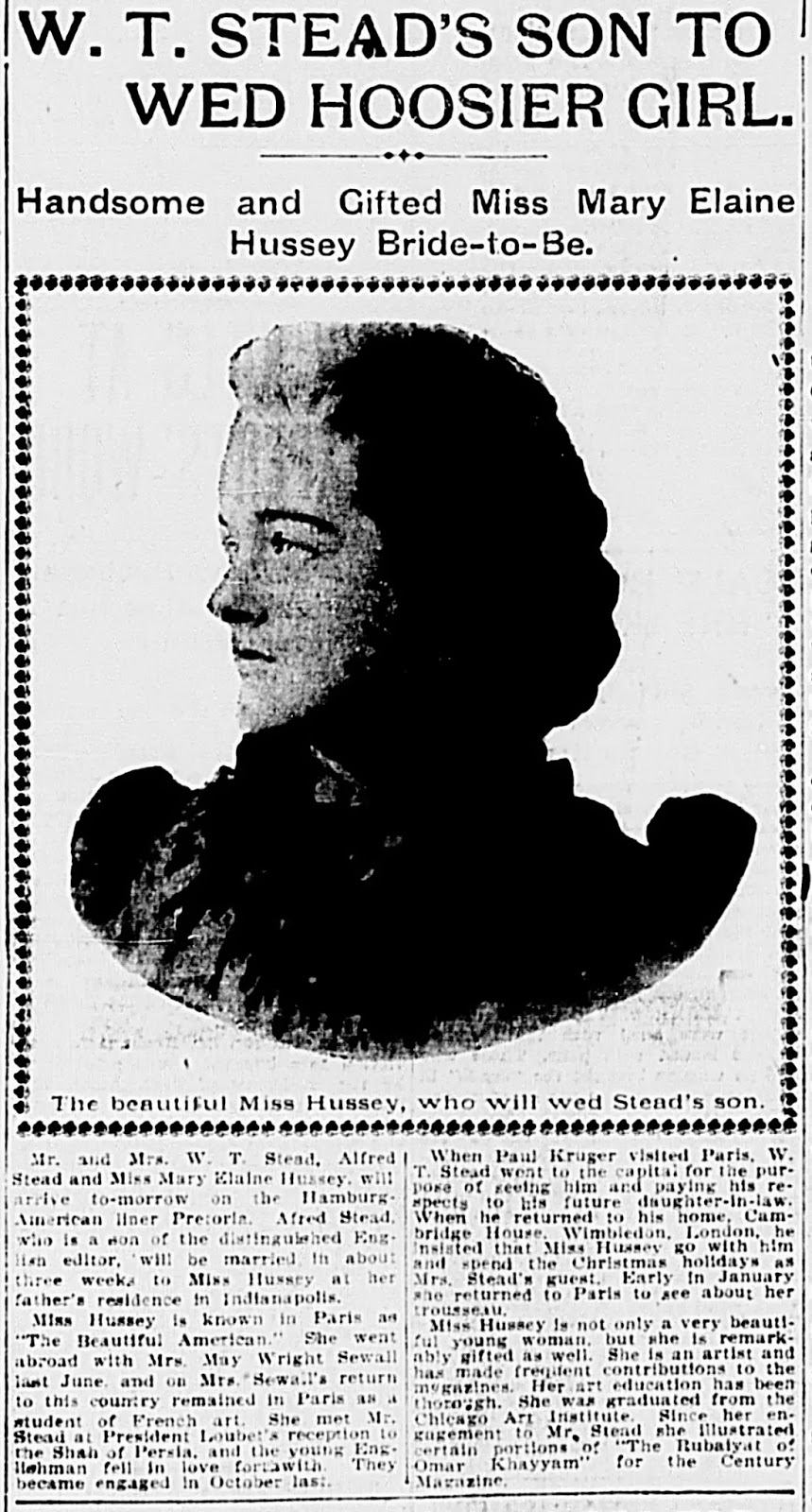 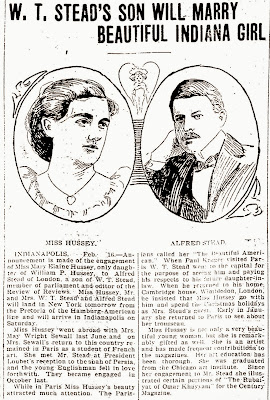 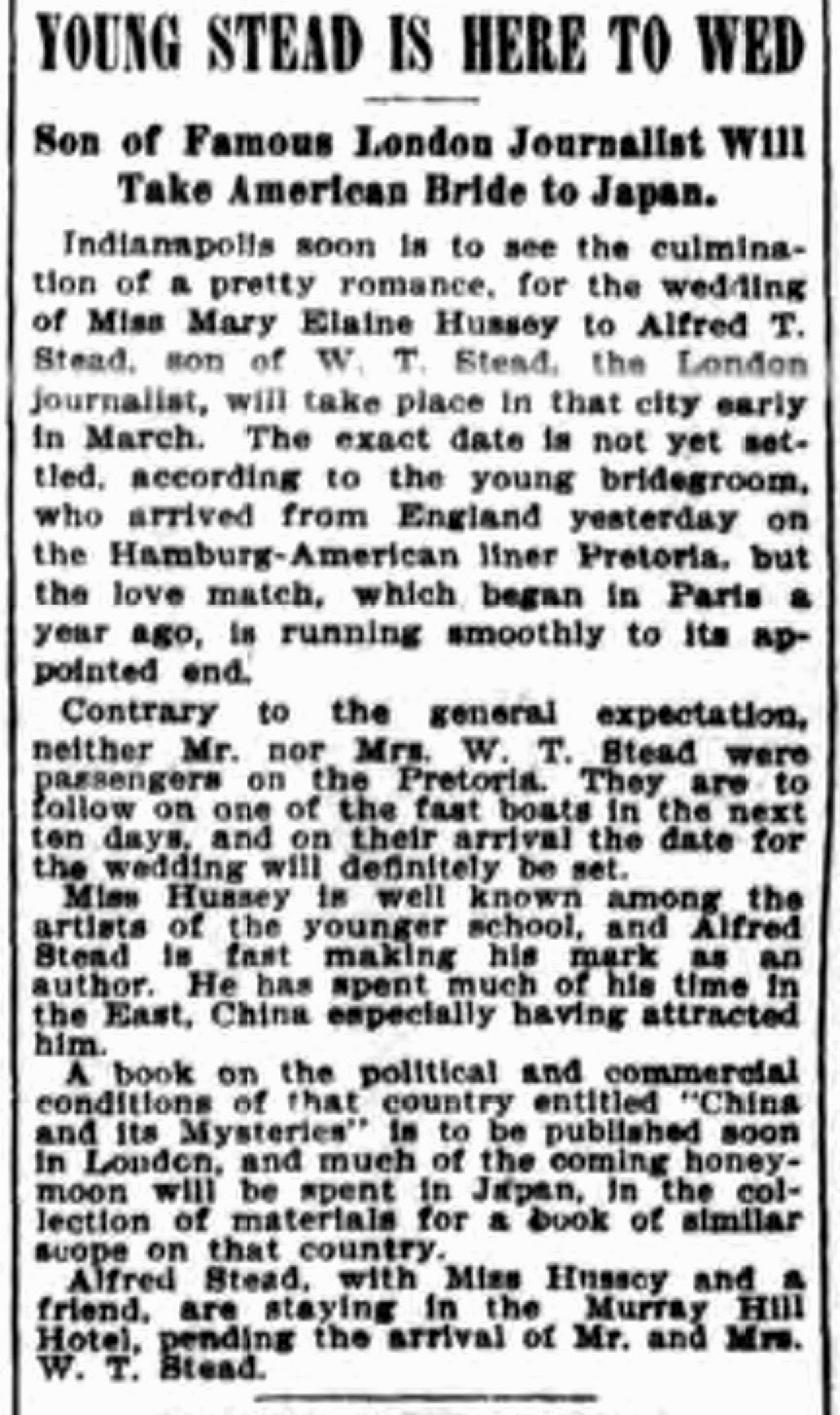 February 24, 1901
“Shah of Persia Was Responsible for This Anglo-American Alliance” 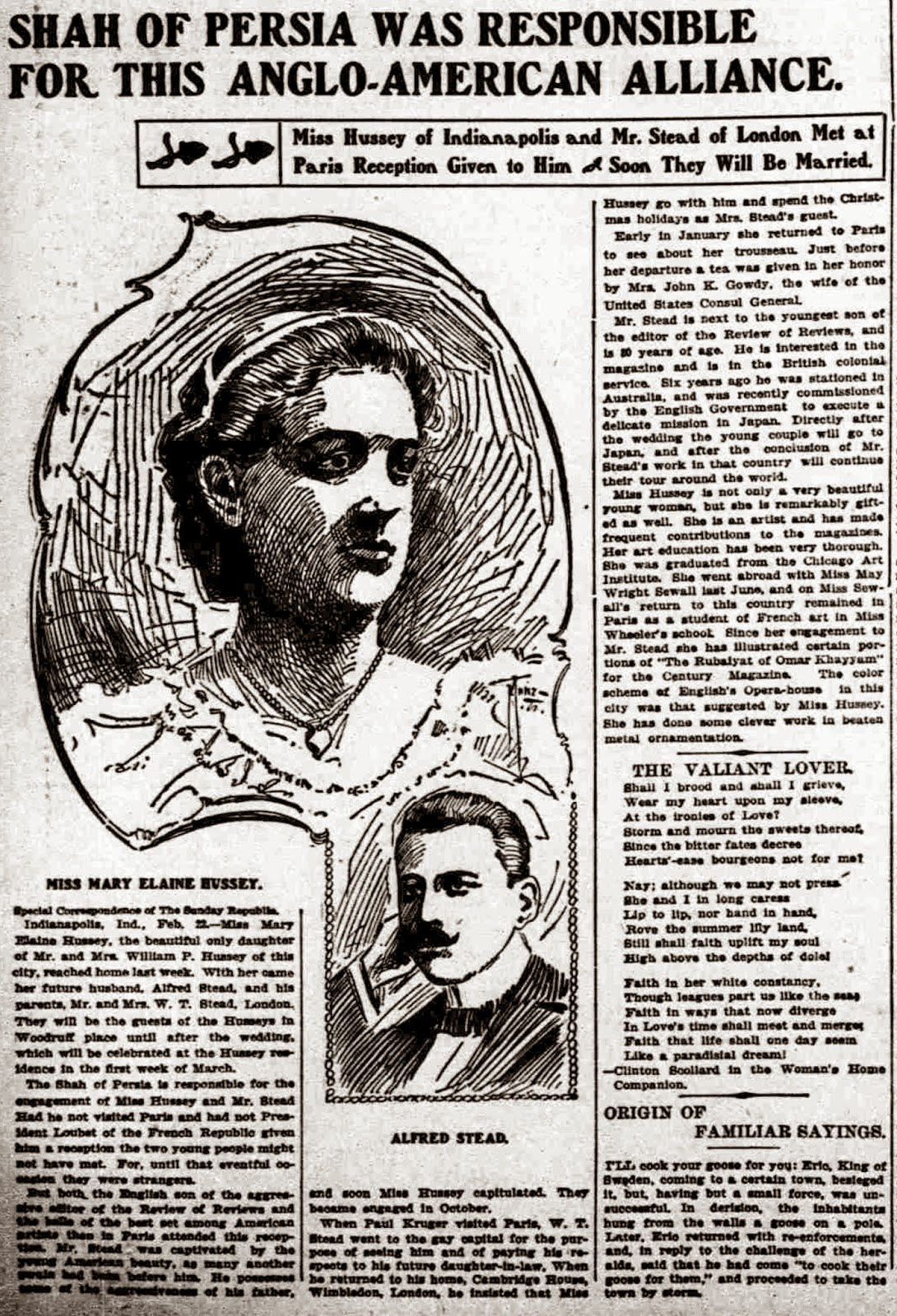 The Indianapolis Journal
March 30, 1901
“...Mr. and Mrs. Alfred Stead will sail to-day from
San Francisco on the Gaelic for Honolulu.”

The Butte Inter Mountain
July 8, 1903
“Spoon Made by King Peter”

The San Francisco Call
October 4, 1903
“…Augustus Koopman, the artist, whose portrait of Mrs. Alfred Stead
(Elaine Hussey of Indianapolis) has just been completed….”

The San Francisco Call
November 22, 1903
“Literary Women of London Are Planning to Organize
an International Club with Backing of Many Millions”

The Critic
February 1905
The Lyceum Club of London

Academy Notes
April 1907
“The Portrait of Mrs. Alfred Stead”
by Augustus B. Koopman

The Bookman
August 1907
“The Expatriates”
The American Colony in London 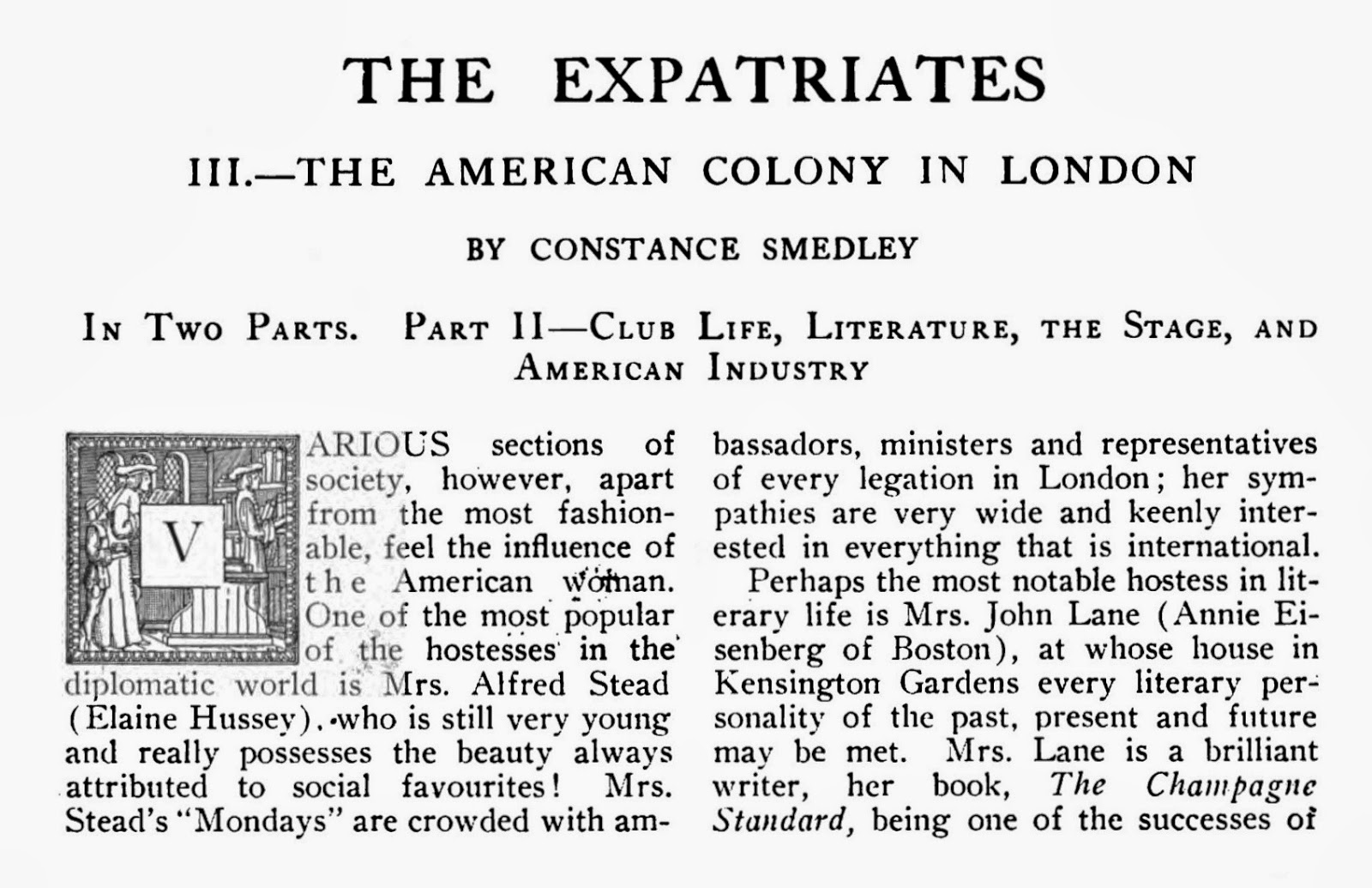 Mary E. Hussey sailed on the steamship Cedric from Liverpool,
England. She arrived in the port of New York October 5, 1907.

The New York Times
September 20, 1911
Aboard the Lusitania bound for Liverpool

Maiden Tribute
Grace Eckley
Xlibris Corporation, 2007
“...Alfred Stead, a brilliant polyglot, ever inventive and colorful, characteristically fond of uniforms and medals, served in World War I. He married Mary Elaine Hussey, a wealthy socialite of Indiana, who is remembered in Uganda today as the Countess. Alfred Stead finished the war a colonel and was awarded the CMG in 1919. Who’s Who credits him with earning several additional medals, which were in the possession of his grandson Anthony R. Stead for some time. Alfred was taken ill while traveling and died in a hospital in Dresden in 1933. Honoring Alfred’s preference, the Countess sent his ashes to England....”

“Kahangi Estate is situated in the foot hills of the Ruwenzori Mountain range in Western Uganda near the District town of Fort Portal….After the Wall Street crash of 1929 and the subsequent collapse of coffee prices the Estate changed hands and became the property of Countess Stead, daughter-in-law to the notable British journalist, and peace activist W.T Stead.”

(Next post on Monday: Lowercase g)
Posted by Alex Jay at 8:00 AM