Frederick Hillel “Fred” Iger was born in New York City on July 12, 1924. His birth date was in a public record at Ancestry.com. His parents were Morris Leib Iger and Lenore Schnapp, who married on July 2, 1921, according to the New York, New York, Marriage Index at Ancestry.com. Lenore, also known as Lena and Lee, was the sister of Ira Schnapp.

In the 1925 New York state census, Iger and his parents resided in the Bronx at 2244 Grand Avenue. His father was a restaurant worker.

The 1930 U.S. Federal Census recorded Iger, his parents and sister, “Tobie”, in the Bronx at 1165 Shakespeare Avenue. His father had changed his name to George and was the proprietor of a restaurant.

According to the 1940 census, the Iger family resided in Manhattan at 601 West 113th Street. The household included Sadie Schnapp, Iger’s maternal grandmother, whose husband, Max, had passed away April 2, 1936. Sadie’s passing was in mid-December 1944. Death notices on both of them were printed in the New York Times. 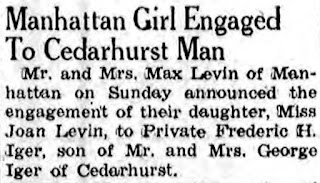 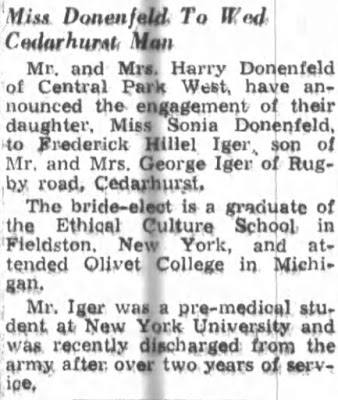 Tho bride-elect is a graduate of the Ethical Culturo School in Fieldston, New York, and attended Olivet College in Michigan.

Mr. Iger was a pre-medical student at New York University and was recently discharged from the army after, over two years of service. 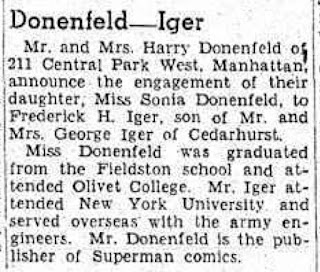 Miss Donenfeld was graduated from the Fieldston school and attended Olivet College. Mr. Iger attended New York University and served overseas with the army engineers. Mr. Donenfeld is the publisher of Superman comics.

The marriage ended in divorce.

The bride wore a gown of champagne taffeta with matching accessories. She carried orchids of the same color.

Mrs. Irwin Donenfeld of Woodmere and Mrs. Frederick H. Iger of Great Neck, sister-in-laws of the bride, attended her. Frederick. H. Iger acted as best man for his brother-in-law.

Mr. Levy, a graduate of New York University, is a navy veteran.

Three executives of these firms testified before a joint, legislative committee studying the publication of comic hooks at a hearing at the Bar Association Building.

Harry Shorten, editor of Archie Comic Publications, Inc., said he thought “the standard of comic books has gone up considerably since the last committee hearing. I think the comic book industry, if given time, will pull itself up by its own bootstraps.”

He admitted under cross-examination that his organization had done nothing toward self-regulation of the industry. He was shown copies of two crime comic books and said he did not approve of them. He then said he “had figured there would be between 50 and 60 objectionable comic books” that he would classify as bad ones.

‘Matter of Principle’
Assemblyman James A, Fitzpatrick, Plattsburgh Republican, then asked him “what would he think of a law forbidding publication of magazines made up principally of pictures of sordid, bloodshed and heinous acts.”

Shorten answered he would be “opposed to any sort of regulation as a matter of principle.”

Sol Cohen, an executive of the Avon Publishing Co., Inc., which publishes 27 magazines with a circulation of 3.5 million monthly, told the committee “I don’t think any comics hurt children because they grow out of it. I think all comics are proper ones to read.”

Cohen said his publications were about 20 per cent devoted to crime. He then read an advertisement which said, “Do you want men to adore you and worship you?” It was a perfume advertisement, one of eight in a comic magazine. Cohen said he saw nothing wrong with the ads.

Asks Law Enforcement
Frederick Iger, as associate publisher of Creston Publications Corp., said, “My suggestion to the committee is that the laws covering obscene and licentious literature be enforced. I am against censorship of the entire industry.”

Iger said, “The purchase of comic books should be in the hands of the parents.” He said the choice of purchase and the choice of display is a guaranteed right. He produced a 3 1/4-inch switchblade knife which, he said, he purchased this morning for $1.49 at a midtown cigar store.

The committee chairman, GOP Assemblyman Joseph F. Carling of Nassau County, suggested the knife be turned over to the district attorney’s office for possible prosecution, as the law forbids the sale of a switchblade knife with a blade measuring more than 2 1/2 inches.

One of the complaints against comic magazines deals with advertisements on switchblade knives.

Reading Held Education
“My basic objection is against any form of censorship,” Iger said. “The most effective way is the education of children as to proper reading”

An Albany woman and a Troy priest yesterday testified before the committee.

Mrs. Charles S. Walker, 410 Fairview Ave., chairman of the legislative committee of the State Congress of Parents and Teachers Inc., said the congress favored outlawing “the worst of comic books, such as those dealing with crime.”

The Rev. Charles C. Smith of St. Peter’s Church, Troy, Albany Catholic diocese director of the National Organization for Decent Literature said the “ideal remedy” would be for comic book publishers to “provide cooperation and police their own field.”

Finds Third Are Violent
Esther Smith said: “I think I have waded through about 350 comic books and found about one-third of them feature crime and violence.” He said that smaller publishers, producing about a fourth of the comics “have never shown any interest in policing their own field.”

He said he believed the Feinberg-Fitzpatrick amendment to the law dealing with comics, vetoed by Governor Dewey, was constitutional.

The priest said he thought the measure should also control publication of magazines on nudism, love and sex because, he said, “comic books are a preparatory phase towards sex books.”


“We do not think censorship of comic magazines is necessary or practicable. Ninety-five per cent of the comics are good,”

Elsworth is editorial director of the National Comics Publications Inc., which publishes 35 comics.

Roy B. McHenry, staff writer for the Endicott Bulletin, told the committee his newspaper “will fight any legislation that resembles censorship.” He said he thought the best way to handle the problem was through newspaper, radio and television campaigns.

One of American Comics Group’s imprints was Custom Comics which printed comics for state fairs. The Billboard wrote about these comics on March 26, 1955 and June 2, 1956.

According to the Social Security Death Index, Iger’s mother passed away in November 1981. The date of his father’s death has not been found.