Anatomy of a Logo: The Mighty Thor, Part 1

To celebrate the IDW release of Walter Simonson's The Mighty Thor: Artist's Edition, I will share with you the chronology of how the new Thor logo came to be.

Looking at my 1983 appointment book, there is an entry on Tuesday, April 26 at 4 o'clock that reads, "Upstart Assoc. Walt Simonson". I believe Walt called to see if I was interested (Yes!) and available to do the logo (Yes!!). If I recall correctly, Walt said he had to get his editor's approval and would call back with the decision. 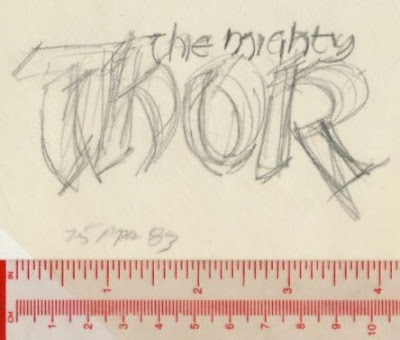 Looking through the job envelope, I found a single sketch on tracing paper, dated incorrectly, "25 Apr 83". I think it was made shortly after our conversation. The open "O" would have a role in the final logo. "The Mighty" shows the influence of an uncial script. When I was a student at Arizona State University, one of my graphic design instructors, Jas Hayden, used calligraphy in his class. Wanting to learn more, I took a calligraphy class at Scottsdale Community College's evening school. My instructor was Terry O'Donnell. From these classes I became familiar with uncials. 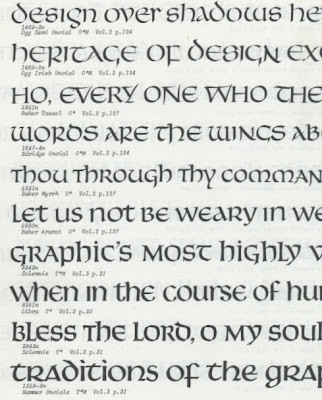 Detail from a page of uncial alphabets from Photo-Lettering's One Line Manual of Styles.

Walt called back and said he got the okay to offer the logo to me. We made a 1:30 lunch appointment for the next day.