Platt Rogers Spencer was the youngest child born to Caleb and Jerusha, and creator of the Spencerian writing system.


TESTIMONIAL.
At a called mooting of the TEACHERS and STUDENTS of Bryant, Stratton & Packard’s Commercial College, held at their rooms on Thursday, May 19, the following resolutions touching the death of Mr. PLATT R. SPENCER were unanimously adopted:
Whereas, We have been made acquainted with the fact of the death of our beloved friend and former instructor, Mr. Platt R. Spencer, who died at his residence in Geneva, Ohio, on Monday evening, May 16, inst.; and

Whereas; We deem it not less a duty than a sacred privilege to memorialize this sad event by a solemn act of the Institution of which we are members, and in which he so recently officiated; therefore, be it

Resolved, That in this sad dispensation of Providence we recognize the hand of a just and wise God, and while we are called upon to mourn the loss of one who has upon us a peculiar claim for gratitude and affection, and whose departure from a field of great usefulness has filled our hearts with unalloyed sorrow and regret, we bow with submission to the will of “Him who doeth all things well.”

Resolved, That in all our past association with our departed friend we have ever found in him the qualities of a true man; and that the retrospect of this valued acquaintanceship recalls no act or thought to mar the sacred pleasures of memory.

Resolved, That in the death of Mr. Spencer, every true friend of education and moral advancement has occasion to mourn the domino of a brother; for in all that tended to benefit society, to advance tho cause of virtue, and to administer to a true and healthy social progress, his heart was alive and his hand free.

Resolved, That all lovers of correct penmanship throughout the world have lost in Mr. Spencer a most devoted and faithful exemplar; and that the day is not distant when to him must be universally conceded the honor of having evolved and perfected a system of Writing which must remain the business standard for all coming time.

Resolved, That while we sincerely deplore the sad stroke which has placed beyond our reach the living instruction of the revered author of the “Spencerian Penmanship,” we will never cease to commemorate his services by a healthful ambition to profit by the works he has left behind him

Resolved, That we do most earnestly and sincerely sympathize with the immediate family and friends of the deceased, and extend to them our heartfelt condolence in this their hour of deepest sorrow.

Resolved, That these proceedings be published in the city papers, and that a copy thereof be handsomely engrossed for the family of the deceased. 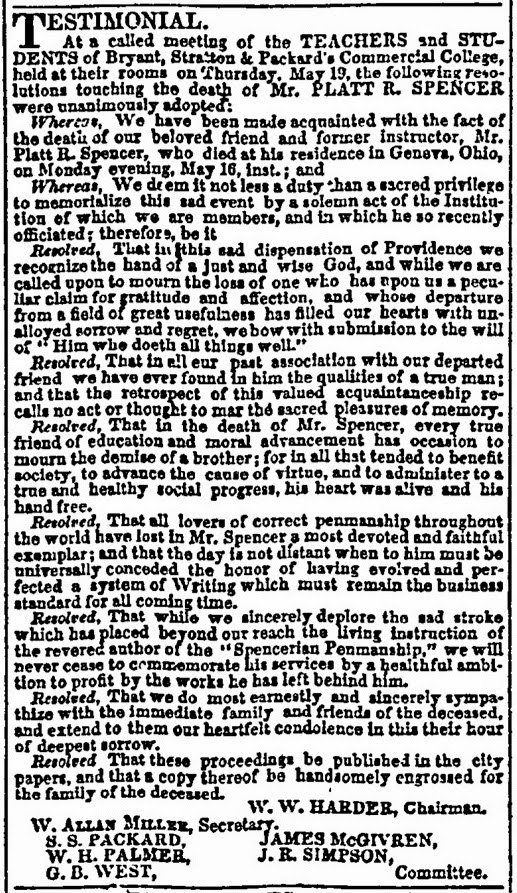 Herringshaw’s Encyclopedia of American Biography of the Nineteenth Century
Thomas William Herringshaw
American Publishers’ Association, 1904
Spencer, Platt Rogers, the originator of the Spencerian method of penmanship, was born Nov. 7, 1800, in East Fishkill, N.Y. He had given penmanship much attention from early youth, and was led to perfect his semi-angular system by seeing the necessity of a more rapid execution than the old round Roman method, and a more legible hand than the angular or German system. He died May 16, 1864, in Geneva, Ohio.


The San Francisco Call
(California)
May 8, 1909
“Where Spencer Taught the Art of Writing”

The Ogden Standard Magazine
(Utah)
October 24, 1914
“Are the Good Penmen All Dead Ones?”

The New Standard American Business Guide: A Complete Compendium of How to Do Business by the Latest and Safest Methods
Edward Thomas Roe
G.G. Sapp, 1914
Penmanship

(Next post on Monday: Spider-Man’s Gas Mask, Très Chic)
Posted by Alex Jay at 8:00 AM