New-York Tribune
(New York)
February 14, 1859
Lecture on Writing.—Mr. JOHN D. WILLIAMS, Professor of Penmanship at Bryant & Stratton’s Mercantile College, will lecture THIS EVENING, commencing at 7 1/2 o’clock, at Room No. 23 Cooper Institute, on the “Principles of Writing involved in the Spencerian System.” The Lecture will be illustrative, and is open to the public.

Chicago Tribune
(Illinois)
September 5, 1865
State Fair.—Mr. John D. Williams, the great Pen Artist, will be on the Fair Grounds and exhibit his wonderful skill with the pen during the Fair.

Mr. Williams is Superintendent of the Ornamental Writing Department in Bryant, Stratton & Co.’s chain of Business Colleges. He is universally acknowledged to have no superior in his department in the country. His “heights” almost excel [illegible] herself—they are wonderful exhibitions of skill. 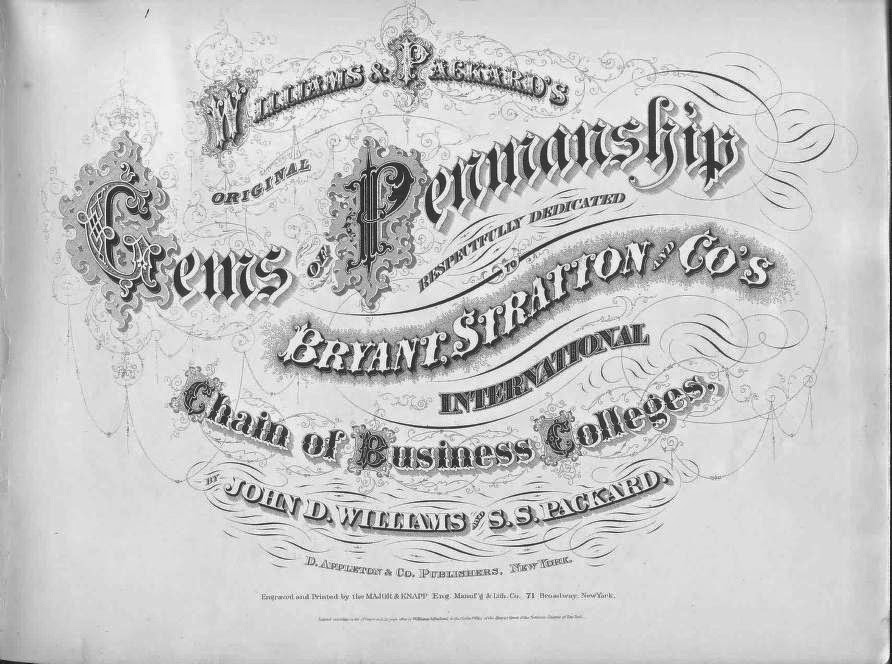 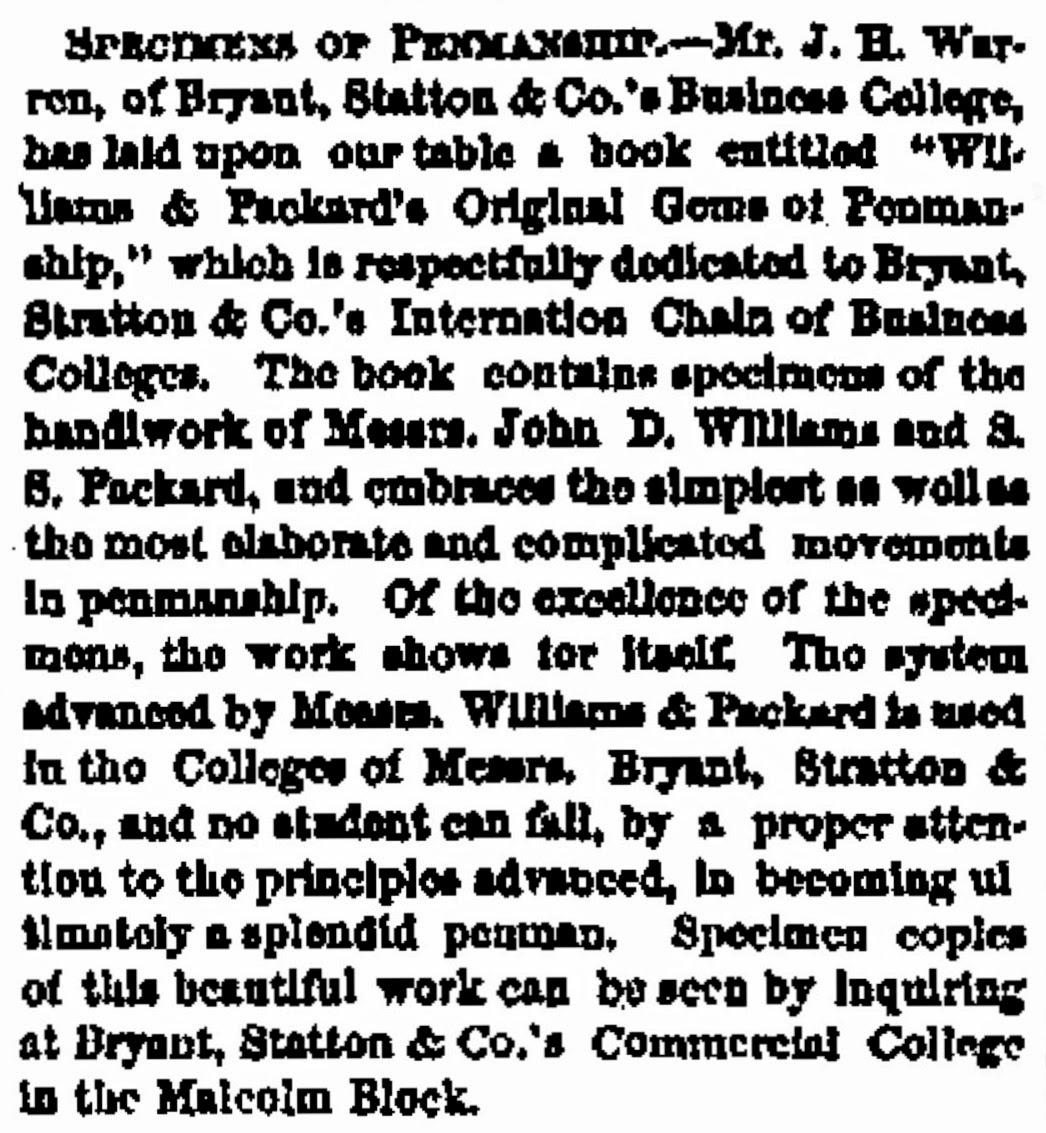 The famous John D. Williams, Superintendent of Writing in the chain of Colleges, author of “Williams & Packard’s Gems of Penmanship,” will be present Monday evening and drill the class. This work, the most elaborate in business and ornamental styles, extant, is offered as premiums for the best improvement and specimens.

Chicago Tribune
(Illinois)
May 4, 1867
Beautiful Penmanship.—The Bryant & Stratton Business College is renowned for its large display of fine Penmanship. The very next talent in the country is always connected with this institution. We understand that John D. Williams, the superintendent of ornamental writing in the chain of colleges, will spend a few weeks at this college, giving instruction to a normal class of writing [illegible]. Persons in the city or from a distance can join classes for this special instruction. 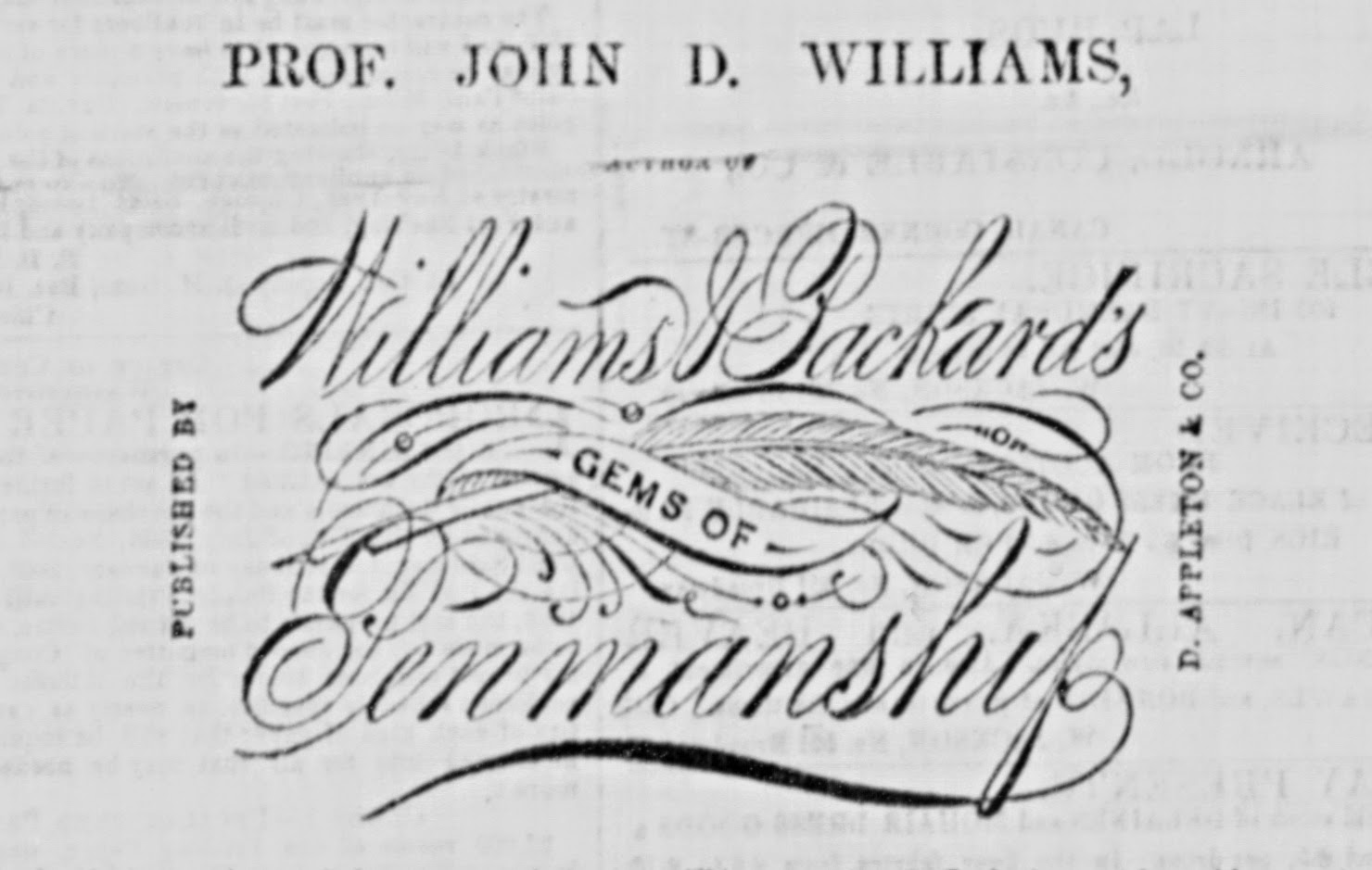 Thirty-first Annual Report of the American Institute, of the City of New York, for the Years 1870–1871
Argus Company, 1871
Premiums
Awarded at the Thirty-ninth Annual Exhibition, 1870
I.—Department of Fine Arts and Education
Sixth Group.—Specimens of printing and bookbinding, books, stationery, ornamental penmanship, globes, maps, charts and all apparatus for instructing in science; tables and machines for calculation.
Award of Premiums
Group 6.—(Division II).
John D. Williams, 458 West Eighteenth street, New York, for a system of ornamental and business penmanship. Honorable mention.

(Next post on Monday: Photo-Lettering’s 1969 Alphabet Yearbook)
Posted by Alex Jay at 8:00 AM