We present herewith the portraits of three young men whose brilliant work has won them a most enviable distinction among all who appreciated the penman’s art. They are C. P. Zaner, L. M. Kelchner and E. W. Bloser, known under the corporate name of the Zanerian Authors and Artists, and directors of the Zanerian Art College, Columbus, O.

All three of these gentlemen are Pennsylvanians by birth, and all were raised on a farm, their school training being only what the facilities of the public schools of their respective localities could afford. Mr. Zaner’s home was near Forks, Pa. He was born there on Feb. 15, 1864, and was nineteen when he left to strike out in the world for himself. He taught penmanship a little in 1884, but gave it up until 1886, when he settled down steadily and has been at it continuously since. In 1888 he published his popular “Gems of Flourishing,” and in the same year founded the Zanerian College. Almost from the start his work won recognition from the old heads of the profession. It is distinguished by boldness and sureness of stroke, without sacrifice of delicacy. Mr. Zaner wields an uncommonly versatile pen and shows equal fertility of resource in the lines of script, flourishing and ornamental work. Many of his bright productions have appeared in The Journal and we have made arrangements by which he is to become a regular monthly contributor. The first of a series of illustrated papers by him begins in this number.

Mr. Zaner has been a constant reader of the penman’s papers, and attributes his skill largely to their influence. He found the Spencerian Compendium of much assistance in getting the “finishing touches.”

L. M. Kelchner will be thirty years old on the eighth of next month. His life was spent on a farm at Light Street, Pa., until he was eighteen years old. The next eight years he spent running a flour mill. It was not until 1888 that he began to teach penmanship professionally, though he had dabbled in it a little some time before. He became a joint proprietor of the Zanerian College in 1890.

Mr. Kelchner also thanks the penmanship press chiefly for his ability in that line. Another fruitful source of inspiration he found to be specimens from noted penman purchased by him. While he is a good writer and general penman, Mr. Kelchner excels as a flourisher, and has made many handsome designs of this kind. By far the most striking design we have ever seen from his pen is a large piece we now have in hand and expect to produce next month. It will be the first by “The Journal’s Galaxy of Flourishers,” which includes about twenty of the best known penmen in this line in the world.

E. W. Bloser was born at Plainfield, Pa., on Nov. 6, 1865. In 1883 he moved to Ohio, became interested in penmanship, and has been following it professionally ever since. He became a third owner in the Zanerian College only a few months since.

We show a specimen of Mr. Bloser’s work in this number. It is of the kind on which his reputation rests, his forte being script work in general and body writing in particular. His pen is capable of turning a remarkably smooth and graceful line, as our readers may see.

The work of the institution of which these three young gentlemen are the owners and directors can only be properly described as brilliant. Though established but a few years it already number among its graduates many young men and women who are making their influence felt as teachers and artists. It is The Journal’s business to keep abreast of such matters, and it is The Journal’s pleasure to give credit to those who win success by deserving it. That this success did not come without hard work, but was born of the faith and pluck which beat down all barriers, may be gleaned from Mr. Zaner’s own account of the beginnings of the now highly successful enterprise with which he is identified:

“We started with one student and enough money to buy bread for one. We worked from seven o’clock in the morning until nine at night. We contrived means of letting people know of our school (if such it could by called) and of the work we were capable of doing. We were willing to sow and trust for the harvest. We rested not by the way, but toiled on. Slowly the fruit of our labors began to ripen. Students began to come in now and then. Friends were friends indeed, for through them we received support we could not buy. Prospects began to brightened, hopes materialized and bills vanish. A little surplus cash and credit aided in mailing another circular in which our work appeared to better advantage and our purpose in terms unmistakable. Thus it was that our work began. Our rooms were getting too small for the number of students seeking instruction. We decided to accommodate all first-class comers. We secured larger, brighter, cleaner rooms. We then began to realize that two hands and one brain were inadequate for the work at hand.” 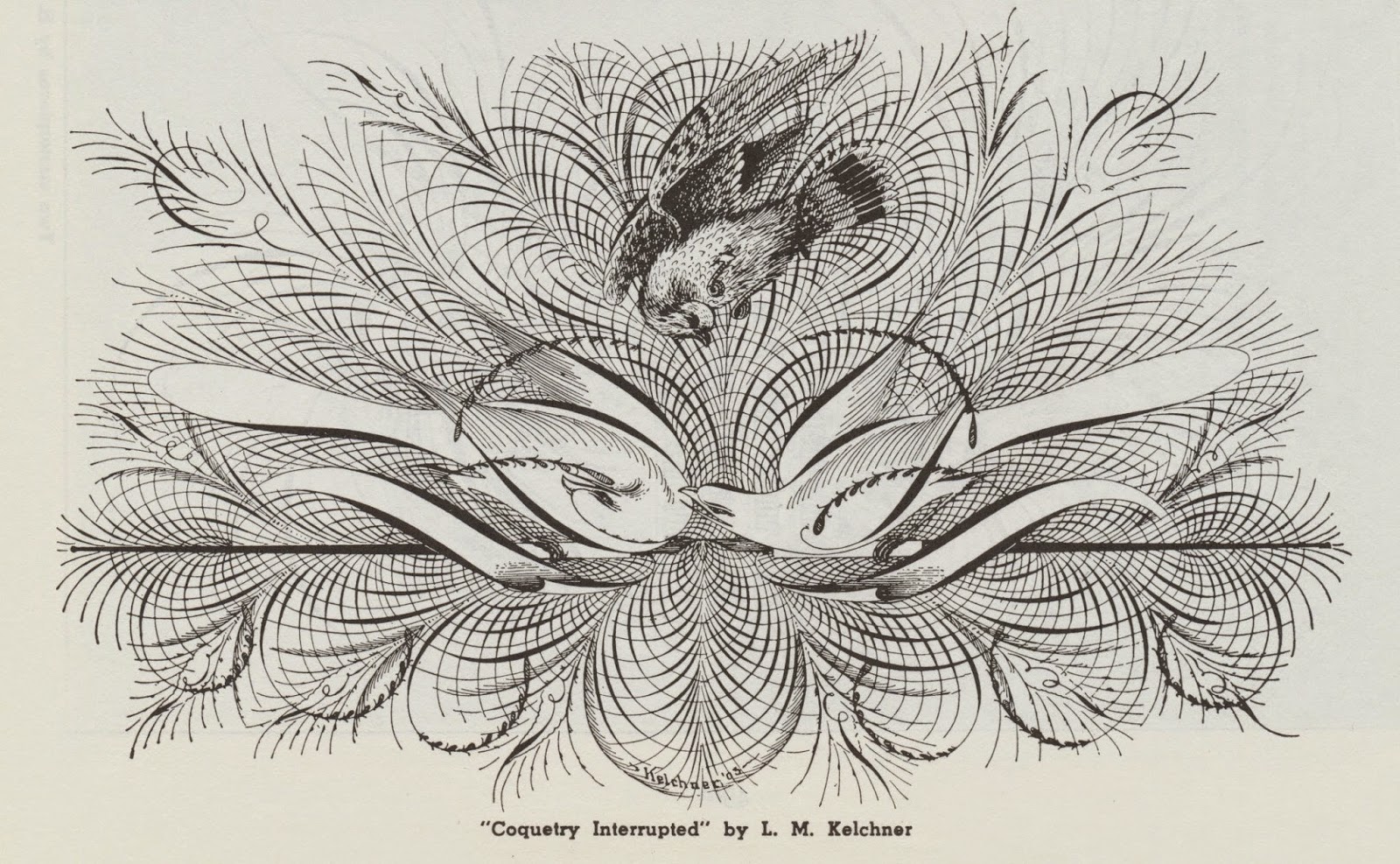 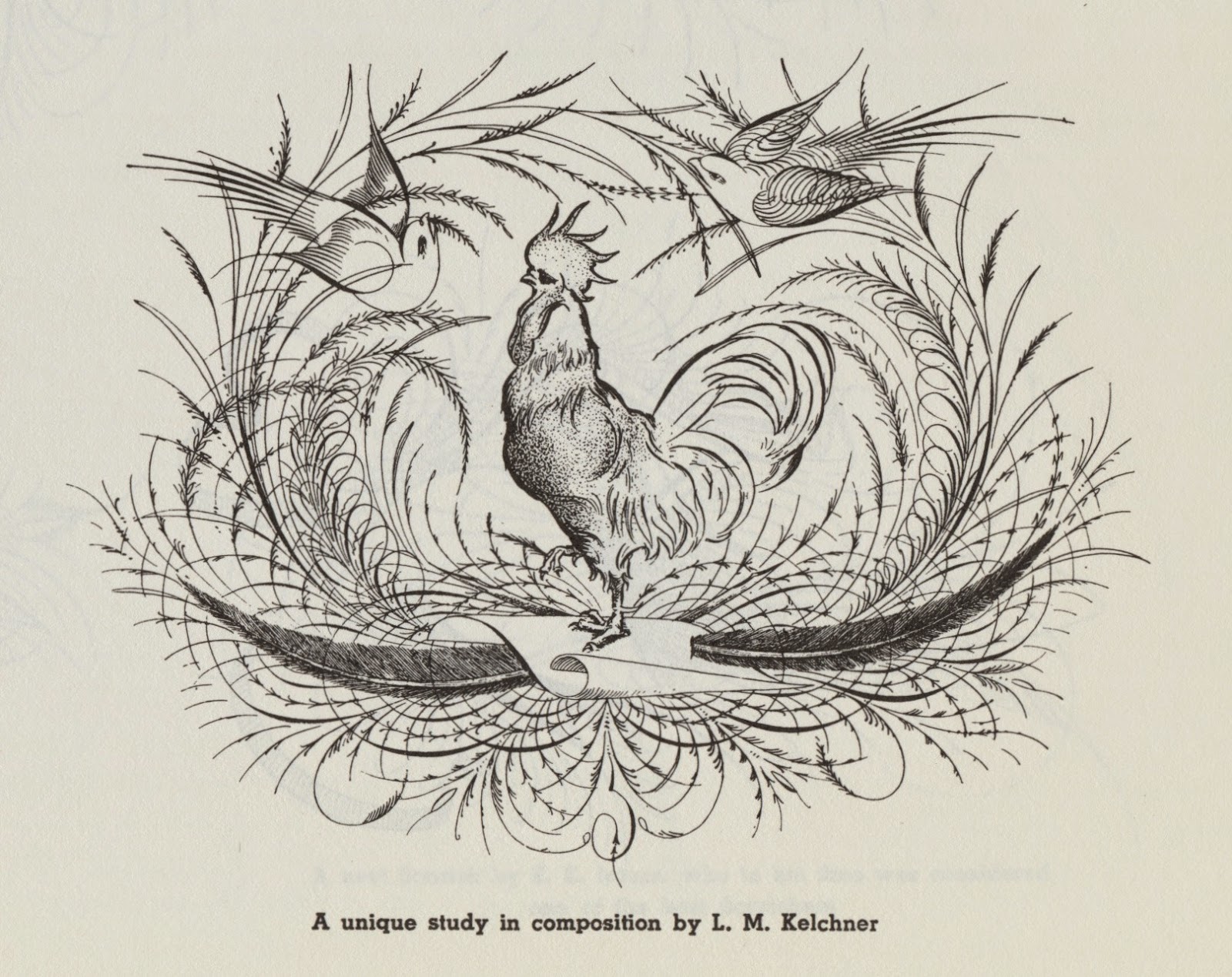 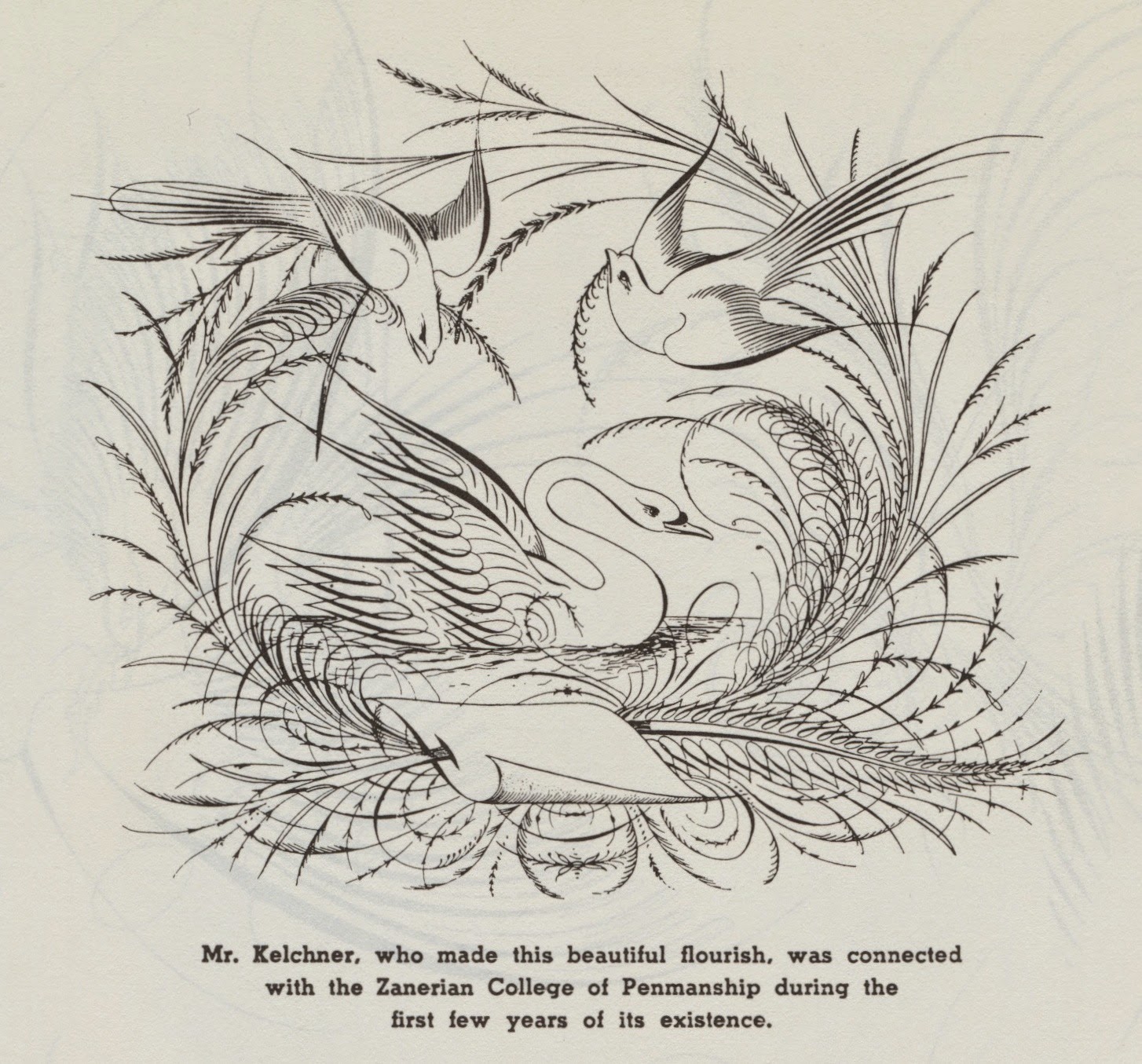 Penman’s Art Journal
February 1897
Supplement page VI: Normal School Penman.
L. M Kelchner.
L. M. Kelchner was born in 1861, in Light Street, Columbia County, Pa. Until his eighteenth year he worked on his father’s farm, and his early educational training was only what the facilities of the public schools of the town afforded. The next five years of his life, save a portion of the winter of 1884, he spent in a flour mill. It was during the winter of 1884 that he first became interested in penmanship, pen art and drawing. it was then that he resolved to become an expert penman. His first active work as a teacher of penmanship was in a commercial college in Cleveland, Ohio. Here he remained for two and one-half years, finally resigning his position to become one of the equal proprietors of the Zanerian Art College, where he remained until December, 1891, when he disposed of his interest in the Zanerian and accepted apposition as teacher of penmanship and pen art in the Highland Park Normal College at Des Moines, Iowa. This position he resigned in September 1895, to accept an offer from the proprietors of the Northern Illinois Normal School, to take charge of one of the departments of the school—the Northern Illinois College of Pen Art and Drawing. His work in the last named school has been wonderfully successful. He has charge of the general penmanship classes, as well as the special department. Mr. Kelchner is a copper plate writer, and is equally at home in business, ornamental and vertical writing. In flourishing, lettering and drawing, his work has attracted much attention. The portrait of him shown herewith is a reproduction of a pen drawing made by himself. He is an enthusiastic teacher, a loyal friend, a refined gentleman and his students’ ideal. 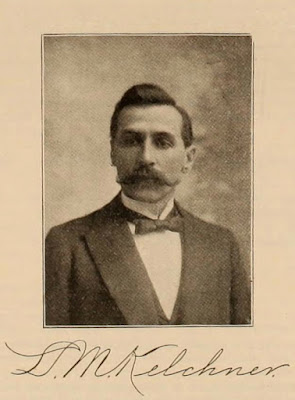 Funeral services will be held at the Home Undertaking Parlors Friday, 2 p.m. Friends are invited. Interment at Spokane, Wash.

Mr. Kelchner, a native of Light Street, Pa., came to Seattle in 1909, when he accepted a position on the faculty of a Seattle business college. At one time, he was part owner of the Zaniern [sic] Art College of Columbus, Ohio, and at various times he had taught pen-art and business courses at the Northern Illinois Normal College at Dixon, Ill., and Highland Park College at Des Moines, Iowa. He resided at 5002 Wallingford Av.

Surviving are a son, D. R. Kelchner, Seattle; a sister in California, and a grandchild.

(Next post on Monday: Hermann Zapf)
Posted by Alex Jay at 8:00 AM