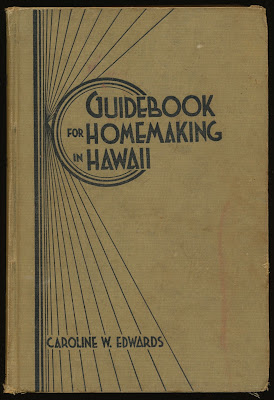 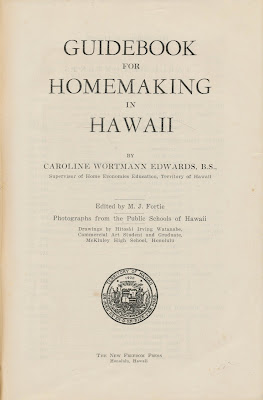 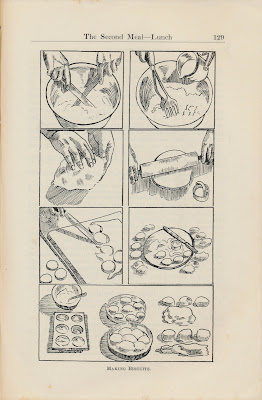 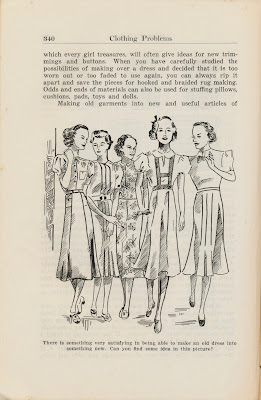 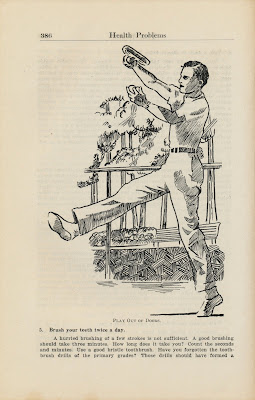 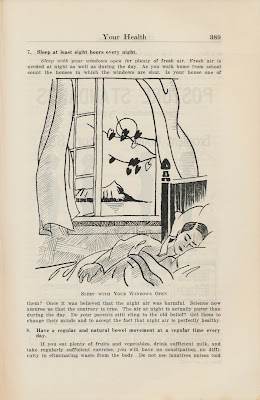 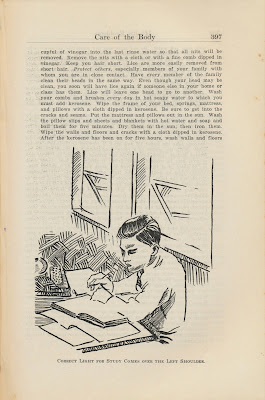 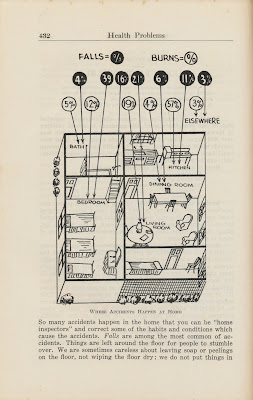 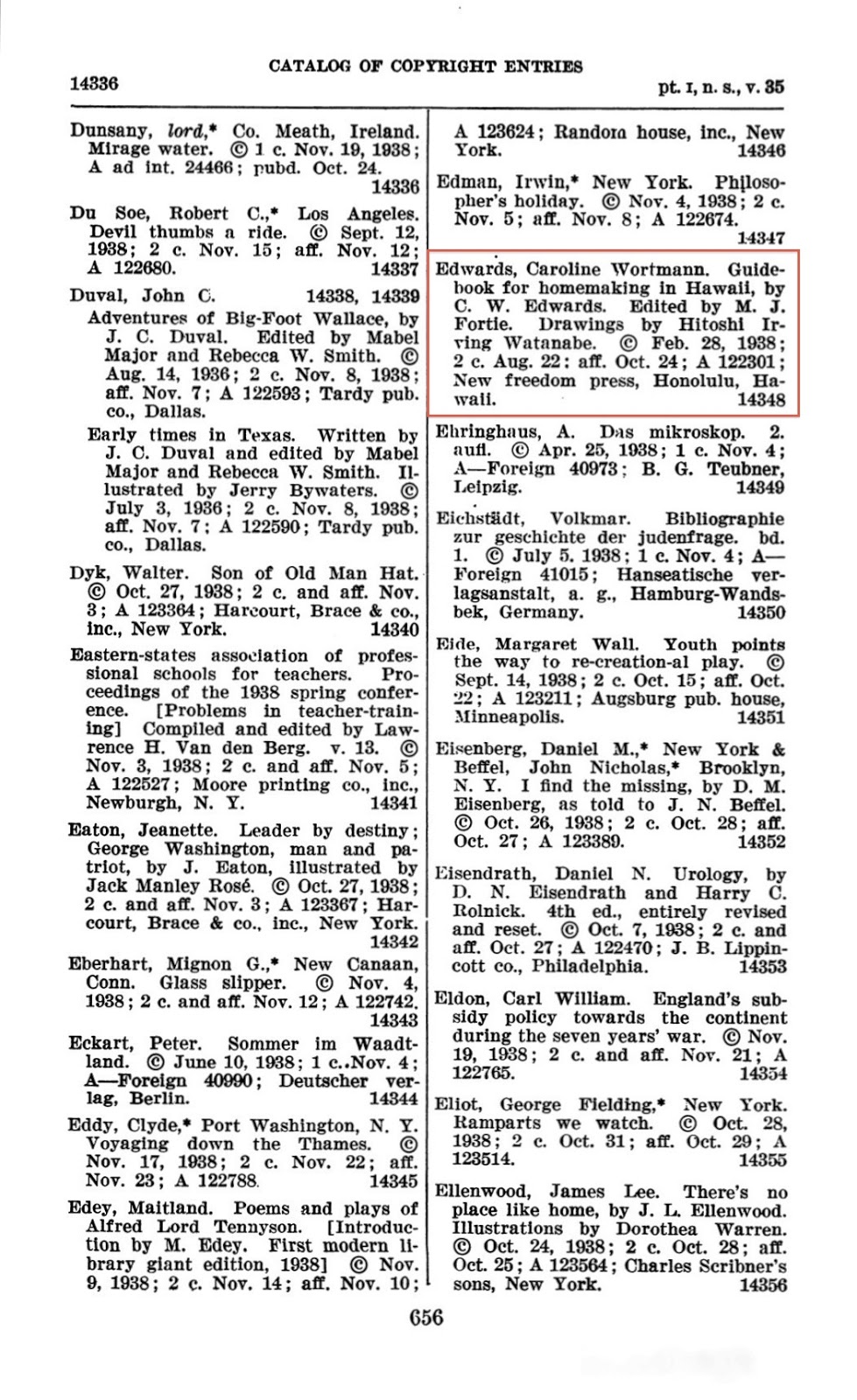 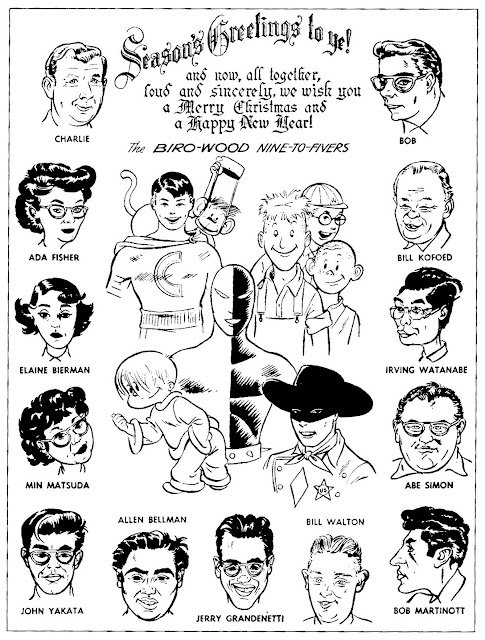 True Comics
#34, April 1944
Truly Comic! (letters page)
A lady hurriedly entered the drug store and asked the man behind the soda fountain. “Are you a doctor?” Smilingly, he replied, “No, but I’m a fizzician!”
Irving Watanabe, New York, N.Y.

The Comics Journal, #282, April 2007
Fred Guardineer was interviewed and said: “…I did a lot of work for Charley Biro and Bob Wood in their crime comics. All their lettering was done by a guy of Japanese descent named Irv Watanabe. He was an excellent letterer. He lettered all of their books, including mine. I used to get the story and then I’d draw the thing up in pencils the best I could. I would letter roughly, so you knew how much space it took up. Then I would turn, what they called the pencils, turn them into Bob Wood and Charley Biro or at Gleason’s, which was their publisher. The fellow would letter them in ink and then I would pick up the pencils, take them home and finish the job. I would bring in the full job a couple of days later….”

Long Island Star Journal, (New York), July 14, 1959
Buddhists to Celebrate
Many Queens families will join in the city’s 10th annual Buddhist festival from 7 P.M. to 10:30 P.M. Saturday on Riverside Park Mall at 103rd street and Riverside drive in Manhattan. It will celebrate with traditional street dancing and oriental music embellished with Japanese lanterns.

Hogan’s Alley
Funny Business: The Rise and Fall of Johnstone and Cushing
By Tom Heintjes

...The company was able to hire the best talent because the advertising industry’s demand for comics-style advertising was great, and the agencies paid an art service like Johnstone and Cushing accordingly. As the company assembled a staff, they hired Jack Frost and Irving Watanabe for balloon lettering, Floyd Bonar for logo lettering and Eliot Batchelder for coloring and mechanicals production.... 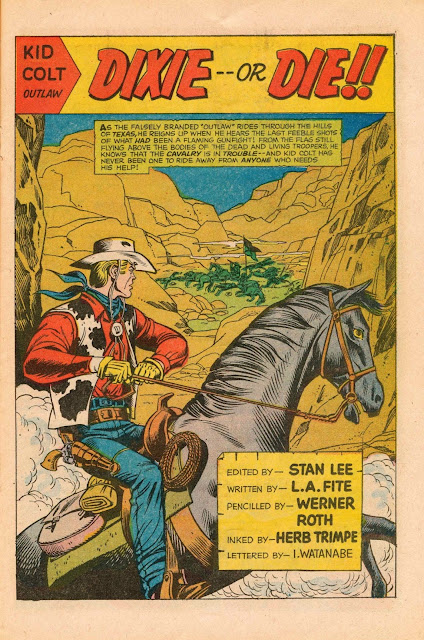 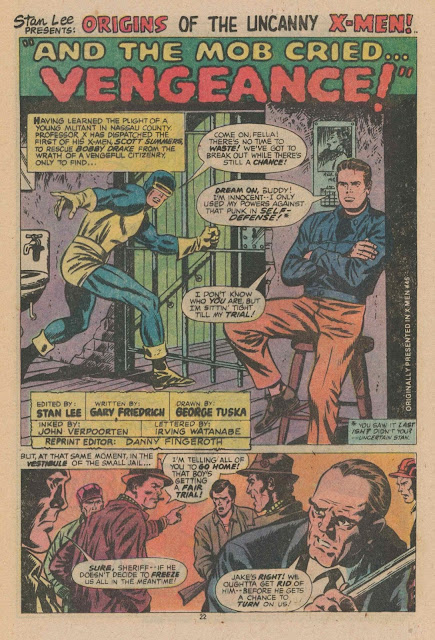 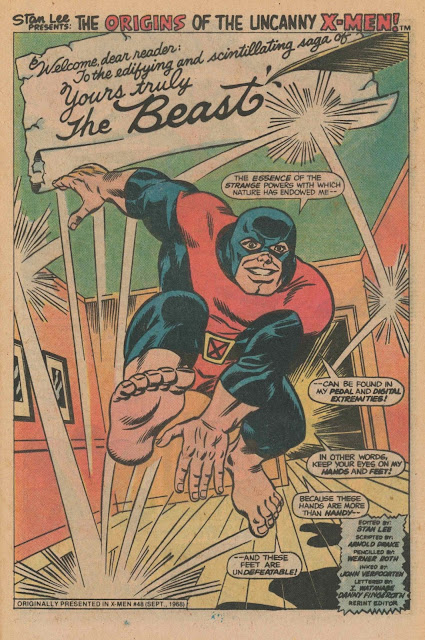 Correspondance
Three letters by Irving Watanabe to Jerry DeFuccio who was working on a Charles Biro biography. Watanabe’s letters were offered on eBay. I acquired one letter and copies of two others. 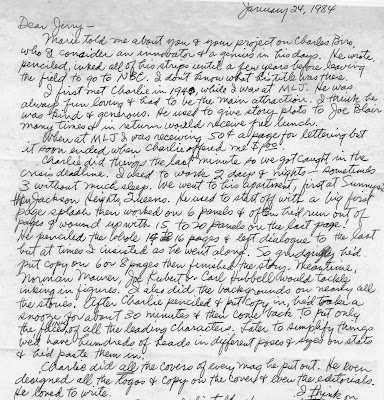 Marie told me about you & your project on Charles Biro,
who I consider an innovator & a genius in his days. He wrote,
penciled, inked all of his strips until a few years before leaving
the field to go to NBC. I don't know what his title was there.

I first met Charlie in 1940, while I was at MLJ. He was
always fun loving & had to be the main attraction. I think he
was kind & generous. He used to give story plots to Joe Blair
many times & in return would receive free lunch.

When at MLJ I was receiving 50 cents a page for lettering but
it soon ended when Charlie offered me $1.00.

Charlie did things the last minute so we got caught in the
crisis deadline. I used to work 2 days & nights—sometimes
3 without much sleep. We went to his apartment, first at Sunnyside
then Jackson Heights, Queens. He used to start off with a big first
page splash then worked on 6 panels & often he'd run out of
pages & wound up with 15 to 20 panels on the last page!
He penciled the whole 1 to 16 pages & left dialogue to the last
but at times I insisted as he went along. So grudgingly he'd
put copy on 6 or 8 pages then finished the story. Meantime,
Norman Maurer, Joe Kubert or Carl Hubbell would tackle
inking in figures. I also did the backgrounds on nearly all
the stories. After Charlie penciled & put copy in, he'd take a
snooze for about 30 minutes & then come back to put only
the faces (ink) of all the leading characters. Later to simplify things
we'd have hundreds of heads in different poses & sizes on stats
& he'd paste them in.

Charlie did all the covers of every mag he put out. He even
designed all the logos & copy on the cover & even the editorials.
He loved to write.

Later in his career when he was popular & financially
successful, he relegated his stories to Fran, his wife, who I
think was a very good dialogue writer. Charlie would
first tell her the plot & she'd letter in the copy as Charlie
continued penciling. This was in 1942, '43 '44. Charlie would
put in the first phrase in pencil & she'd put in the rest. After
she finished Charlie edited it & then I took over.

Charlie was very good to me. During the war years he
raised my salary from $100 to $190 per week. In those years
that was pretty good for anyone. When we started to go downhill after the war
he cut it to $150. Everybody took a cut to offset the $10,000 deficit.
Within 6 months he paid everybody off. 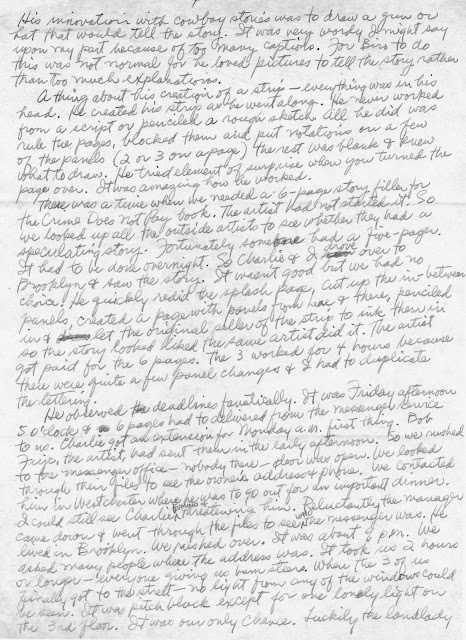 His innovation with cowboy stories was to draw a gun or
hat that would tell the story. It was very wordy I might say
upon my part because of too many captions. For Biro to do
this was not normal for he loved pictures to tell the story rather
than too much explanations.

A thing about his creation of a strip—everything was in his
head. He created his strips as he went along. He never worked
from a script or penciled a rough sketch. All he did was
rule the pages, blocked them and put notations on a few
of the panels (2 or 3 on a page) the rest was blank & knew
what to draw. He tried element of surprise when you turned the
page over. It was amazing how he worked.

There was a time when we needed a 6-page story filler for
the Crime Does Not Pay book. The artist had not started it. So
we looked up all the outside artists to see whether they had a
speculating story. Fortunately someone had a five-pager.
It had to be done overnight. So Charlie & I drove over to
Brooklyn & saw the story. It wasn't good but we had no
choice. He quickly redid the splash page, cut up the in-between
panels, created a page with panels from here & there, penciled
in & let the original seller of the strip to ink them in
so the story looked liked the same artist did it. The artist
got paid for the 6 pages. The 3 worked for 4 hours because
there were quite a few panel changes & I had to duplicate
the lettering.

He observed deadlines fanatically. It was Friday afternoon
5 o'clock & 6 pages had to [be] delivered from the messenger service
to us. Charlie got an extension for Monday a.m. first thing. Bob
Fuje, the artist, had sent them in the early afternoon. So we rushed
to the messenger office—nobody there—door was open. We looked
through their files to see the owner's address & phone. We contacted
him in Westchester where he was to go out for an important dinner.
I could still see Charlie fuming & threatening him. Reluctantly the manager
came down & went through the files to see who the messenger was. He
lived in Brooklyn. We rushed over. It was about 9 p.m. We
asked many people where the address was. It took us 2 hours
or longer—everyone giving us bum steers. When the 3 of us
finally got to the street—no light from any of the windows could
be seen. It was pitch black except for one lonely light on
the 3rd floor. It was our only chance. Luckily the landlady

opened the door because we made such a racket. It was the correct
address & we asked about the name—if he lived here. It was his
light on the third floor. We knocked, he opened the door, he was
drunk. We got the 6 pages, he got fired on the spot. It was after
1:30 in the morn when I reached home. 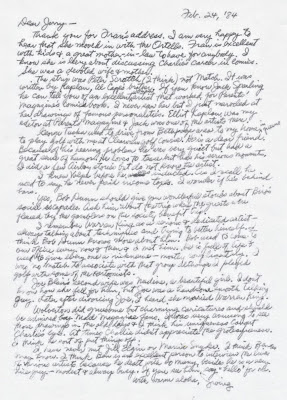 Thank you for Fran’s address. I am very happy to
hear that she moved in with the Ortells. Fran is excellent
with kids & a great mother-in-law to have for anybody. I
know she is leery about discussing Charlie’s career in comics.
She was a devoted wife & mother.

The strip was Peter Scratch (I think) not Match. It was
written by Kaplan, Al Capp’s brother. If you know Jack Sparling
he can tell you of an excellent woman artist that worked for Parents’
Magazine’s comic book. I never saw her but I just marveled at
her drawings of famous personalities. Elliot Kaplan was my
editor at Parents’ Magazine & Jack was one of the artists there.

George Tuska used to drive from Bethpage area to my home in Queens
to play golf with me at Clearview golf course. He is a dear friend.
Because of his hearing problem he was very quiet but had a
great sense of humor. He loves to tease but has his serious moments.
I did a few Airboy stories but do not know the artist.

I knew [Frank] Volpe before he was inducted. As I recall he
used to say he never paid income taxes. I wonder if he’s behind
bars.

Yes, Bob Dunn should give you wonderful stories about Biro’s
social escapades. Ask him about the trip where the guests were
fleeced by gamblers on the society benefit trip.

I remember Warren King as a serious & dedicated artist—
always talking about techniques and trying to better himself. I
think Bob Dunn knows more about him. Bob used to come to
our office every now & then & I met him. He is full of life &
used to give every one a nickname—mostly complimentary. I
was no match to associate with that group although I played
golf with some of the cartoonists.

Joe Blair’s second wife was Nadine, a beautiful girl. I don’t
know how she fell for him, but Joe was a handsome smooth talking
guy. Later after divorcing Joe, I heard she married Warren King.

Wolverton did gruesome but charming caricatures and should
be admired by Mad Magazine fans. It was very amusing to see
those drawings in the old days & I think his uniqueness caught
Charlie’s eyes. At times Charlie didn’t appreciate the grotesqueness.
I think he sort of put things off.

I have never met Jill Elgin or Marcia Snyder. I think Ben Oda[?]
may know. I think Ben is an excellent person to interview [illegible] lives
of various artists because he dealt with so many, besides he is a very
nice guy—modest & always busy. If you see him, say “hello” for me. 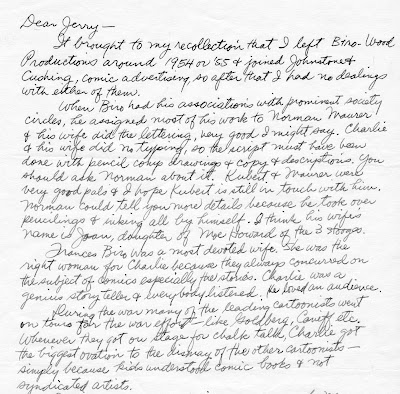 It brought to my recollection that I left Biro-Wood
Productions around 1954 or ’55 & joined Johnstone &
Cushing, comic advertising, so after that I had no dealings
with either of them.

When Biro had his associations with prominent society
circles, he assigned most of his work to Norman Maurer
& his wife did the lettering, very good I might say. Charlie
& his wife did no typing, so the script must have been
done with pencil comp drawings & copy & descriptions. You
should ask Norman about it. Kubert & Maurer were
very good pals & I hope Kubert is still in touch with him.
Norman could tell you more details because he took over
pencilings & inking all by himself. I think his wife's
name is Joan, daughter of Moe Howard of the 3 stooges.

Frances Biro was a most devoted wife. She was the
right woman for Charlie because they always concurred on
the subject of comics especially the stories. Charlie was a
genius story teller & everybody listened. He loved an audience.

During the war many of the leading cartoonists went
on tours for the war effort—like Goldberg, Caniff etc.
Whenever they got on stage for chalk talk, Charlie got
the biggest ovation to the dismay of the other cartoonists
simply because kids understood comic books & not
syndicated artists.

P.S. I think Marie is a
sweetheart of a prison—kind,
understanding, humorous & a
good listener.

Watanabe’s comic book credits are at the Grand Comics Database, as Irv and Irving.