Marcia Louise Snyder was born on May 13, 1907, in Kalamazoo, Michigan. The birth date is from the Social Security Death Index and the birthplace is based on her parents’ residence in Kalamazoo. Snyder’s full name appeared in the Kalamazoo Gazette (Michigan), June 13, 1921, and Florida death certificate. Snyder’s parents were Charles R. Snyder and Louise P. Underwood, who married on January 20, 1898 in Kalamazoo, according to the Michigan Marriage Records at Ancestry,com.

In the 1900 U.S. Federal Census, Snyder’s parents resided with her maternal grandparents, Theodore and Katherine Underwood, in Chicago, Illinois, at 6707 Wentworth Avenue. Snyder’s father was a clerk at a shoe store. Shortly after the census enumeration, Snyder’s parents moved to Kalamazoo. The first child of Snyder’s parents died shortly after birth in 1902. The couple lost their second child in 1906.

The 1907 and 1909 Kalamazoo city directories listed Snyder’s father as a clerk who lived at 219 West Cedar Street.

The 1910 census recorded Snyder, her parents and three-month-old brother David, and an aunt, Pauline, in Kalamazoo at 1007 South West Street. Snyder’s father was a shoe store salesman. In the 1917 city directory, Snyder’s father worked in the insurance industry.

The Gazette, May 11, 1919, reported the upcoming performance of the cantata, “Childhood of Hiawatha”. Snyder was one of the 150 children in the chorus that sang with the Chicago Symphony orchestra. Music News, May 30, 1919, published an article about the May Festival; Snyder was mentioned on page 15.

Snyder was a Girl Scout. An advertisement for three screenings of the Girl Scout film, “The Golden Eaglet”, appeared in the Gazette, December 4, 1919, and said Snyder was one of the scouts appearing in a short exhibition of camp life and first aid work. The March 28, 1920 edition of the Gazette said Snyder, of Troop 4, passed the invalid bed making test.

The Snyder household and address remained the same in the 1920 census.

The Gazette, June 13, 1921, said Snyder would be one of twenty-nine students graduating the eighth grade of the Western Normal Training school on June 16. Snyder continued her education at Western Normal High School. Apparently, her school operated under the Kalamazoo Plan, a program for teaching art, which was examined in The School Arts Magazine, March 1922.

Snyder graduated in 1925. Next to her senior photograph, in the Highlander yearbook, was this quote, “I love not man less, but art more.”

Snyder may have continued her art training at another institution such as the Kalamazoo School of Art, Kalamazoo Institute of Arts, and Western Michigan University.

The Journal of Proceedings of the Fifty-fourth Annual Convention of the Diocese of Western Michigan (1928) listed receipts for various services. Snyder submitted an invoice of six dollars and twenty-five cents for her signs.

Sometime in the late 1920s, Snyder moved to New York City. The 1930 census recorded Snyder as a self-employed artist who had two roommates, Lucile Cameron, a department store saleswoman, and Emma Rayhon, a bank file clerk. The trio lived at 315 West 4th Street in Manhattan.

Snyder’s brother, David, a 1927 graduate, followed her to New York City. David’s marriage to Margaret Lusty was covered in the East Hampton Star (New York), June 9, 1933, which said, “A luncheon and reception was given by Miss Marion [sic] Snyder, sister of the groom, at her home in Greenwich Village immediately after the ceremony.” 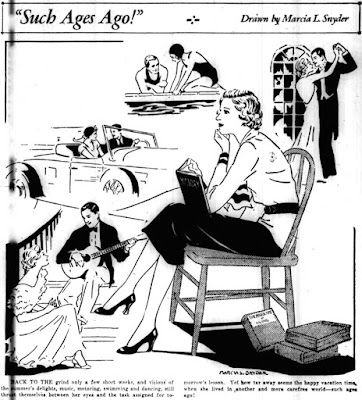 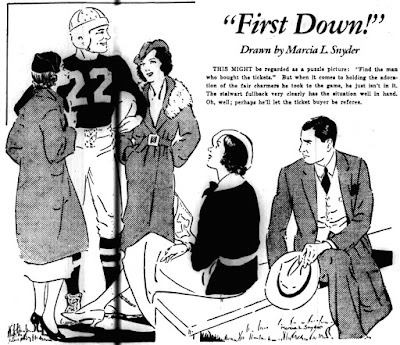 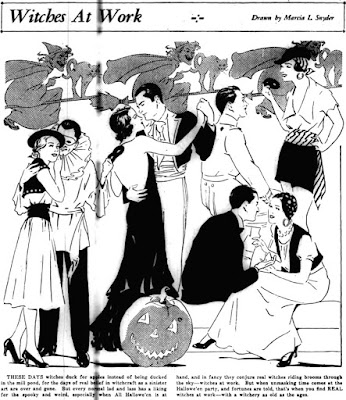 Who’s Who of American Comic Books 1928–1999 said Snyder found work at a number of comic book publishers and a comics studio.

Regarding the Binder studio, Women and the Comics (1985) said “Most of these women were inkers and most soon left comics, but two of them, Ann Brewster and Marcia Snyder, were pencillers as well. Both stayed in the industry long after the Binder shop closed in 1943, Brewster going on to spend almost two decades with the Iger-Roche shop...”

At the Sequential Tart site, Murphy Anderson was interviewed by Laurie J. Anderson. He recalled working at the publisher Fiction House, “When I started there they were all ladies, practically. There were only two or three males in there.”


ST: What were the ladies doing? Comic books?
MA: Oh yeah, oh yeah. There was Fran Hopper, she did a number of adventure stories for Planet Comics and all over. Lilly Renée who did their lead feature for Planet Comics. Oh, Ruth McCully was a letterer. Ruth Atkinson was an artist who worked there. Her brother happened to be a very prominent jockey; he was one of the top jockeys in the country at the time. And Marcia Snyder, she did a very heavy adventure-type of material.

In Alter Ego #11, November 2001, Jim Amash interviewed Vince Fago who was an artist, writer, and third editor-in-chief of Timely Comics. In 1943, Timely moved from the McGraw-Hill building to the Empire State Building. Amash asked about the move. Fago explained what happened and added, “Later, for $90 a week, I hired Marcia Snyder, an artist who had done newspaper strips. She dressed like a man and lived in Greenwich Village with a girlfriend named Mickey. I never thought about her being a lesbian; I didn’t care….” Amash interviewed artist Dave Gantz who shared a bullpen photograph that included Chris Rule, Barbara Clark Vogel, Gantz, Snyder, Mike Sekowsky and Ed Winiarski. The photograph was taken at the Empire State Building and published in Alter Ego #13, March 2002. Some of Snyder’s comic book credits are at the Grand Comics Database.

In the 1946 Manhattan telephone directory on page 1150, Snyder was a commercial artist who resided at 64 West 9th Street.

Women and the Comics said Snyder assisted Alfred Andriola on the comic strip, Kerry Drake, which was distributed by Publishers Syndicate. The strip began October 4, 1943. It’s not known when Snyder started assisting Andriola or how long she worked with him.

The East Hampton Star, July 31, 1947, noted Snyder’s visit with her brother in Amagansett, “Miss Marcia Snyder of New York City was entertained last week-end by Mr. and Mrs. David Snyder. Miss Snyder is a commercial artist and works with syndicates in the metropolitan area.” Snyder’s visit to Amagansett was noted in the East Hampton Star, June 2, 1949: “Miss Marcia Snyder of New York, sister of David U. Snyder, with a party of friends, spent the week-end at the Windmill.”

The 1960 Manhattan directory said Snyder still resided at 64 West 9th Street. It’s not known when she moved to Florida.

Snyder passed away in February 1976 according to the Social Security Death Index which said her last residence was Fort Lauderdale, Broward County, Florida. At Ancestry.com, the Florida death index recorded Snyder as “Marsha Louise Snyder”, who was born “May 13, 1914”, and died February 27, 1976 in Dade County.